Apologies for not being around peoples' blogs much these past few weeks - life got a little bit hectic and something had to give!
Anyway, back to my disaster...........!
Last July I was merrily pootling my way up the garden to pick some fruit and veg for tea a couple of weeks after the purlin ring had been put onto the tea house roof when I became aware of a strange buzzing noise working its way into my happy little world. Wandering up past the bottom pond in search of the source of the noise, I became aware that something was amiss;
The bottom pond was empty!!!!
The buzzing was the pump pumping fresh air. Whaaah! 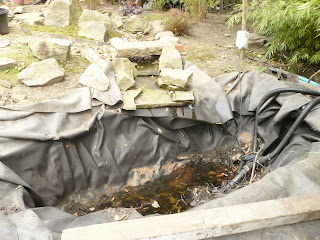 This discovery resulted in a brief outburst of a chorus of the Yorkshire swearing song interspersed with wails of "where's all the water gone?" as I danced up and down in panic! This was NOT a happy dance, I can tell you!
(For those who don't know it, the chorus goes "bugger, bugger, pig, sod, sh*t, sod, damn"!)
I searched around, but to no avail - I just couldn't find where the water had gone. The top pond was still full, nowhere seemed boggy or soggy ...... it had well and truly vanished! I went in search of Himself, Master of Mysteries, to see if he could shed any light onto things!
Himself, having a pessimistic outlook on life (- although he claims it's realistic) immediately decided that there must be a leak in the big top pond. I pointed out that as he hadn't dropped anything sharp into the pond ....had he?, that couldn't be the reason. (nice speedy deflection of potential blame there I thought!).
I don't normally leave the stream running during the week when I'm not around, but I'd forgotten to turn it off the previous Sunday and it had been running constantly for 5 days - so I had no idea how long the pond had been empty. Himself then added in a very satisfactory worry about whether or not the pump would be wrecked from running without water flowing through it. I reckoned that, as it's a German pump, it'd be fine!
We both spent a restless night trying to figure out what had happened. Himself was holding firm on his belief that we'd have to strip out the top pond to find a leak (see - told you he was a pessimist!), but I was convinced that there was another cause - ever the optimist and trying desperately to avoid emptying the top pond of its 5000 litres of water!
The following morning showed that the top pond water level hadn't changed : QED, no leak in there (phew!). Then I remembered Ower Dave!
When Ower Dave had come to help, I'd shouted at him for walking up the stream bed - something along the lines of "gerrof me stream yer gret daft wombat!" (Translation = "please come out of my stream you silly person!"). He'd claimed that dry stream beds were just paths by another name ... too much walking up Kinder Scout Downfall and Grindsbrook together when we were younger had obviously left its mark!
All of the top pond and most of the stream has solid support under the edges of the butyl lining. The only bit that hasn't is ......... the bit of the stream where the beach is! That's just got a thin aluminium strip under it to give it some rigidity. 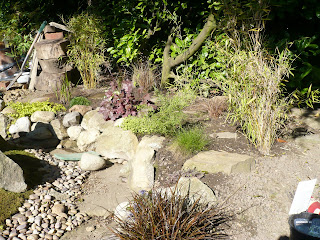 I reckoned that Ower Dave had marched his great clod-hopping boots right over the stones and pushed down the liner and either bent it (hopefully) or ripped it on a sharp edge (please no!). So I shifted all the stones on his possible short-cut and, after a few minutes of serious breath-holding, found that he had indeed squashed the edge, but hadn't ripped the butyl - thankfully!
The lowered edge was then below the water level of the stream and meant that the constantly running water had been able to leach its way through the stones into the moss and soil and soak invisibly away - until there wasn't enough water left to create a flow. 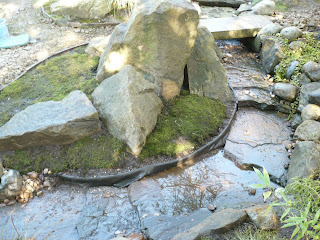 Much relieved by my discovery, I then cleaned out the bottom pond. Yes, I know that technically it's still just a big hole with liner in it but in my imagination it's a finished pond!!!
This summer......! :)
Anyway, I spent considerable time removing water snails, frogs and other small aquatic beasties from the pond before cleaning all the gunk out of the bottom. Very smelly and not the pleasantest of tasks - and not aided by this frog who came back FOUR times after I'd carefully deposited him in the top pond - daft creature!
I gave up and kept him in this tub where I could keep an eye on him! 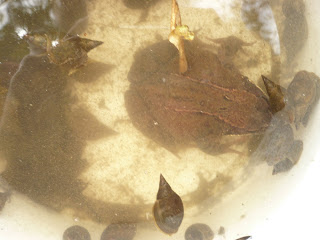 I then faced up to fixing the stream bed instead of procrastinating! I dug out the soil to give me a clear area to work, unfolded the butyl, rebuilt the edging using stones instead of the aluminium strip, refolded the butyl liner down over the stones then replaced the soil, holding the new edging securely in place. I set the stream running to check that I'd not missed any tiny tears - which I hadn't, and to prove to Himself that the pump was fine - which it was! German you know. Dead good! 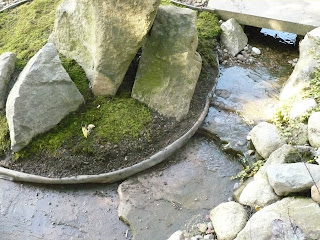 Once I was happy with that, I started to replace the beach - putting in some bigger stones to support the edging should some plonk with big feet decided to walk up it again! 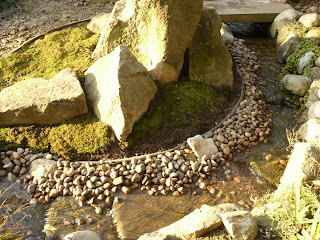 I left the stream running constantly for a couple of days to see if the levels dropped - which they didn't, before I put the finishing touches to the stream, adding the stones and pebbles to hide the liner and spill over onto the moss .......... you'd never know I'd been messing about with it would you?! 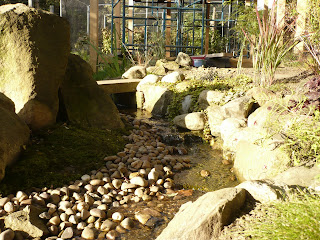 Stream running beautifully - even if the bit below the bridge still isn't finished! 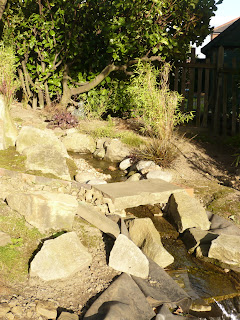 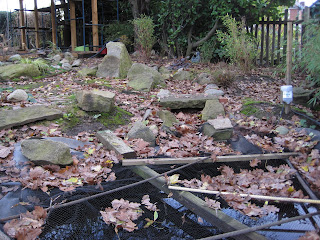 What idiot wanted to build ponds under a load of trees eh?! 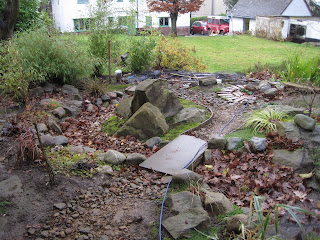 The pond and island yesterday -and, yes, the moss really is that green! A combination of all that snow and lots of rain has been very good for it this winter! 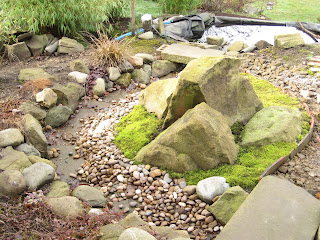 And a perfect way to end the day! 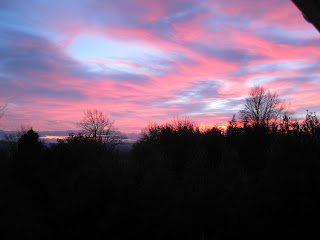