Spring - a matter of life or death?

Inside the house is as cold as outside because the decorators are stripping the hall, stairs and landing and have flung open windows and doors with gay abandon. The living room (where my computer is) currently has no door at all, so I'm wearing several layers, furry boots and a fleece blanket too - trust me, this is not a good look for a romantic Valentine's Day. Good job Himself's away on business really!

Outside it's cold, grey, miserable and doing the whole rain/sleet/rain/hail/rain thing, so I thought I'd look at the photos I took yesterday during a very brief sunny respite from the rain!

It's been a funny winter so far (funny peculiar, not funny haha!) We had all that snow and intense cold in December, then lots and lots and lots of rain ever since. Several trees got damaged from the sheer weight of the snow, but it's only now that I've been able to see the full extent of the damage to the plants. Good job the wonderful spring life cycle has started up again then - although it didn't feel like it was going to at one point. Everything is a bout a fortnight behind!

Snowdrops on the rockery below the front terrace. 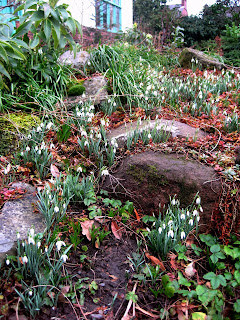 Wet Hellebore ....did I mention it had been raining here?! 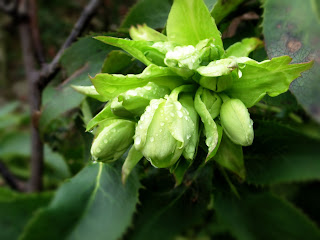 Winter jasmine strangling the light at the top of the front steps - it's not a problem, the light doesn't work anyway! 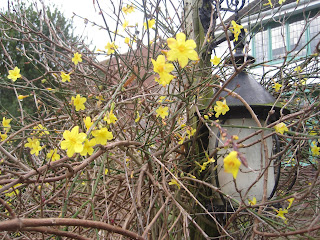 Hellebore Nigra. I split and moved this one last year so I was really glad to see that it had survived under the snow. 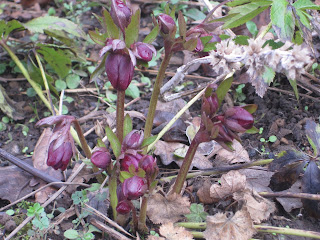 The 3 phormiums haven't coped well with winter!
I'd been planning on moving the largest one (the one nearest the house) this spring as it had become way too dominant up there. At least now I only have to dig it up and it's only about a third of its previous size now!
Crocuses are poking their heads through the dead and very soggy remains of the geraniums. I don't know if they'll recover given that they've been frozen, buried, defrosted and drowned! 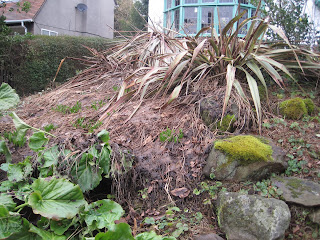 This is one of the branches that broke off the big fir tree at the side of the house under the weight of the snow. It's about 9" in diameter ......... 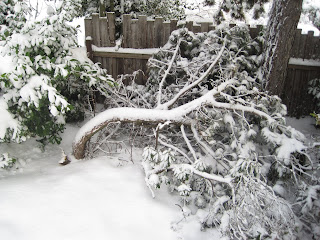 and has left a big gaping wound in the tree :(
Another smaller branch fell off the same night and the tree surgeons have had to cut 2 more branches off because they were cracked and dangerous, but they reported that the tree remains intrinsically sound, so that's good news even if the tree does look a bit lopsided now. 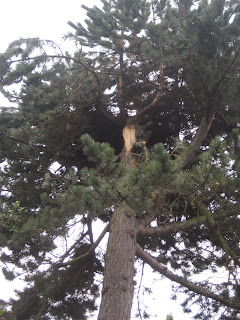 We lost a chunk of fencing in the gales last week and I'm not convinced that the saplings have survived either - but I don't know what they are anyway, I found them in a border!
I'm planning on grassing most of this soon - once I've sorted the fence out 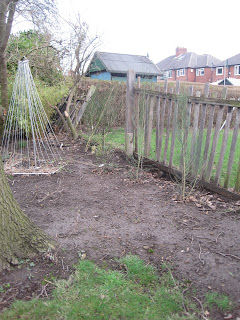 I don't think the Mexican Mock Orange is going to bounce back somehow - it's only tolerant to -5, rather than -15 and two feet of snow! 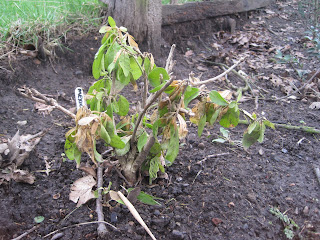 No purple sprouting broccolli this year either - and it was doing SO well :( 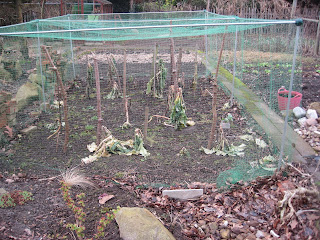 More tree damage.
These conifers were all weak spindly multi-trunked specimins that I wasn't particularly fond of, but I didn't expect them to collapse under the weight of the snow. 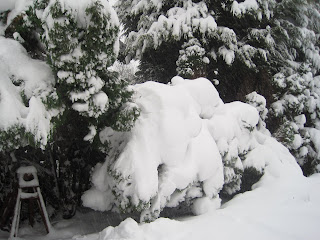 The tree surgeon said they'd had it and wouldn't recover, so all 9 - yep, 9 had to come out
.....mind you, much as I was saddened by their demise I have gained a large chunk of extra vegetable garden - once I've sorted out the manky fence !!! 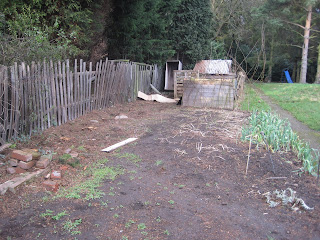 I'm sure you're all fed up with my tales of the potting shed fire, but guess what survived the inferno?
Yep - the wood!
I'd stored a whole mass of kindling and logs in the back part of the building. It's all covered in soot and the plastic bags have melted, but it didn't burn! The wood was the only thing that the cleaning firm were able to rescue for me. Hope it burns on my wood burning stove! 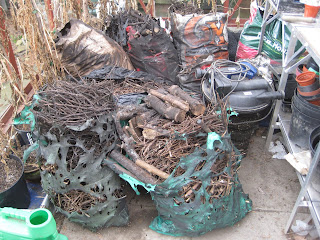 I obviously didn't clear my new salad bed as well as I'd thought I did last spring given the number of crocuses that are popping up! 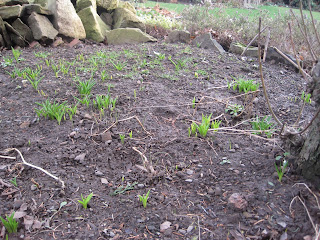 New buds on the blackcurrant bushes - lets hope for a monster crop this year :) 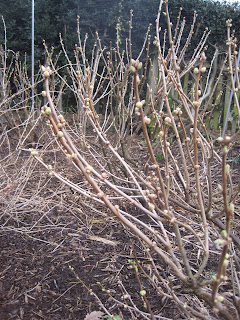 The heather bank is just begining to come into flower. Another week of torrential rain and sleet and it'll be perfect! Did I mention how wet it's been here of late?! 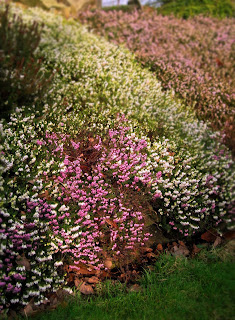 May spring be dry and bright where you are - 'cos it's obviously not going to be dry here! :)
Posted by Nutty Gnome at 10:04 43 comments: