Erm.....oooops indeed. I'm not quite sure where the summer went, except in a frenzy of gardening, but I certainly didn't quite get round to blogging - but here we are now, ready for another except from the delayed tales of how to build a Japanese garden!

Some of you with sharp eyes and long memories might remember that in the early days of the garden, oh so long ago now, there was a fruit cage behind the the tea house....frequently complete with a football care of the son of Mrs. AnotherBloodyEyesore! This photo is from May 2011 - oh how things change! ;-) 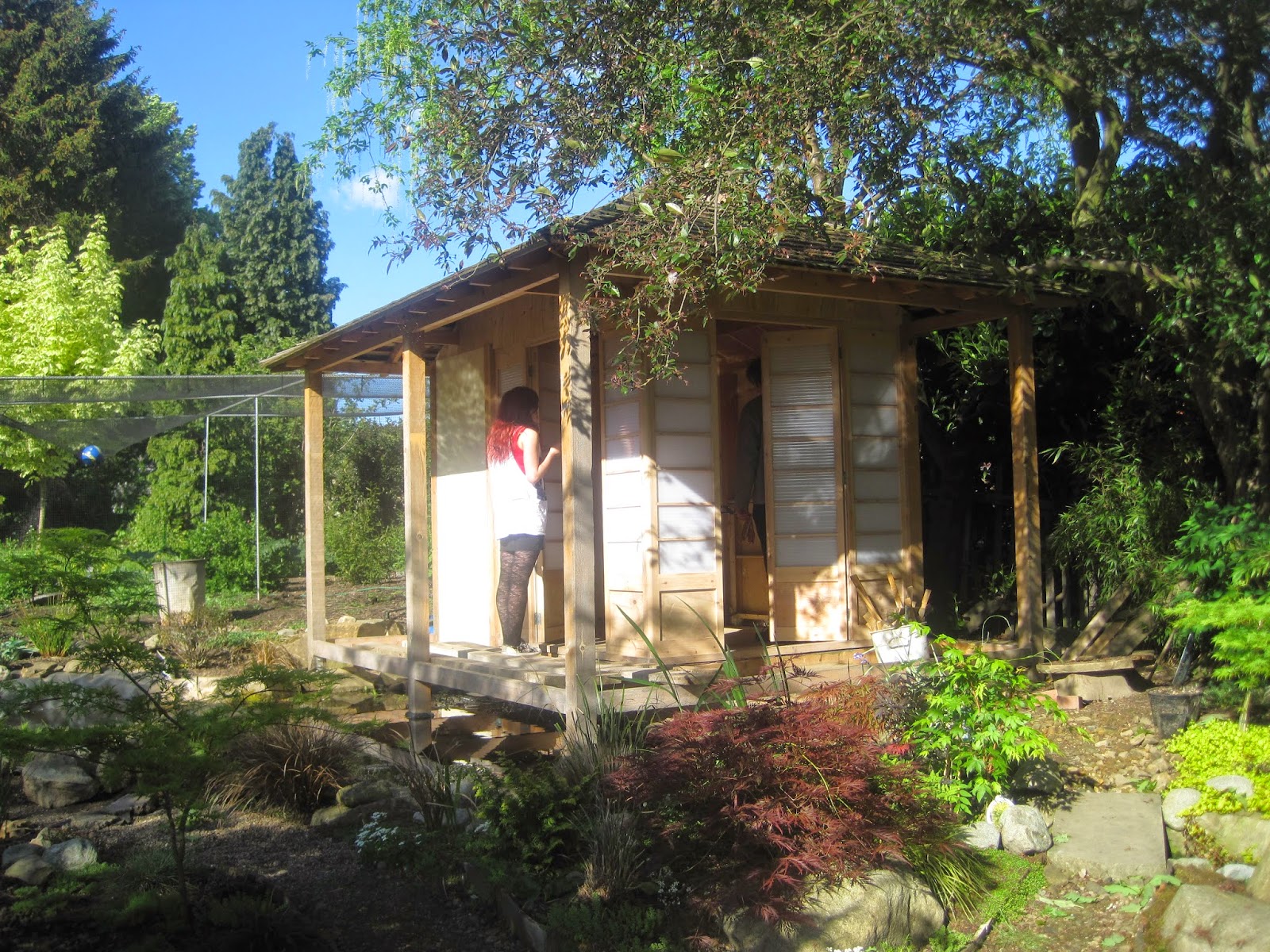 Anyway, that summer we had Big Bud Mite on the blackcurrant bushes in the cage and the only rememdy was to dig the fruit bushes up and burn them ...incurring the wrath of Mrs. A.B.E yet again because she had some laundry out! BUT given that my magic eyes aren't quite strong enough to see through a 6ft high, 3ft wide thick holly boundary hedge and it appears that she always has laundry out so that she has an excuse to shout at people, it was a risk I had to take!


Anyway, I burnt the bushes, survived the verbal mauling from our delightful neighbour and resisted the urge to get drawn into pointing out how often their footballs had damaged our plants, landed in the pond, nearly hit us on the head, etc.etc.etc before realising that I couldn't replant new bushes in the same place in case of recontamination from mites in the soil.

Relocating the fruit cage meant that suddenly there would soon be all this unclaimed land up for grabs! .....Now what could I possibly do with that eh?!
I have to confess that I was never particularly happy with having the fruit cage directly behind the tea house as I felt it detracted from Himself's work of art, but as the fruit cage was there first, I'd never come up with a strong enough reason to shift it - until now!

But it was summer and the redcurrant and gooseberry bushes were still in fruit so moving the cage had to be an autumn job if we didn't want the birds, squirrels, foxes and badgers to get to the fruit before we did! However, having got rid of the blackcurrant bushes, there was space inside the cage to work! I laid out my trusty bit of old hosepipe to form the route for a new path I'd envisaged and Himself kindly offered to dig it for me - and who was I to refuse?! 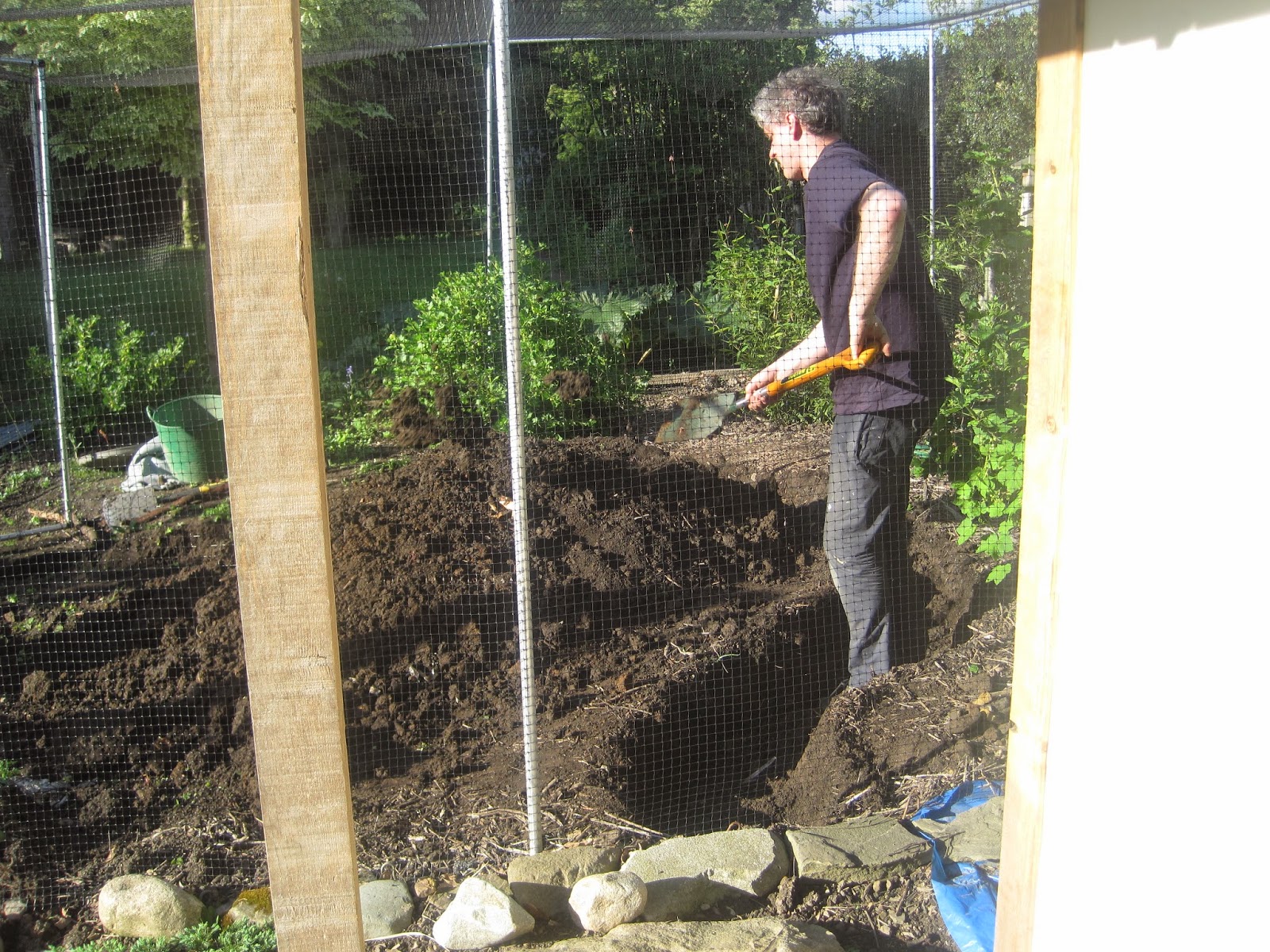 It was hot, hard work ...glad it wasn't me that was digging! I was nice - I kept the pints of water coming! 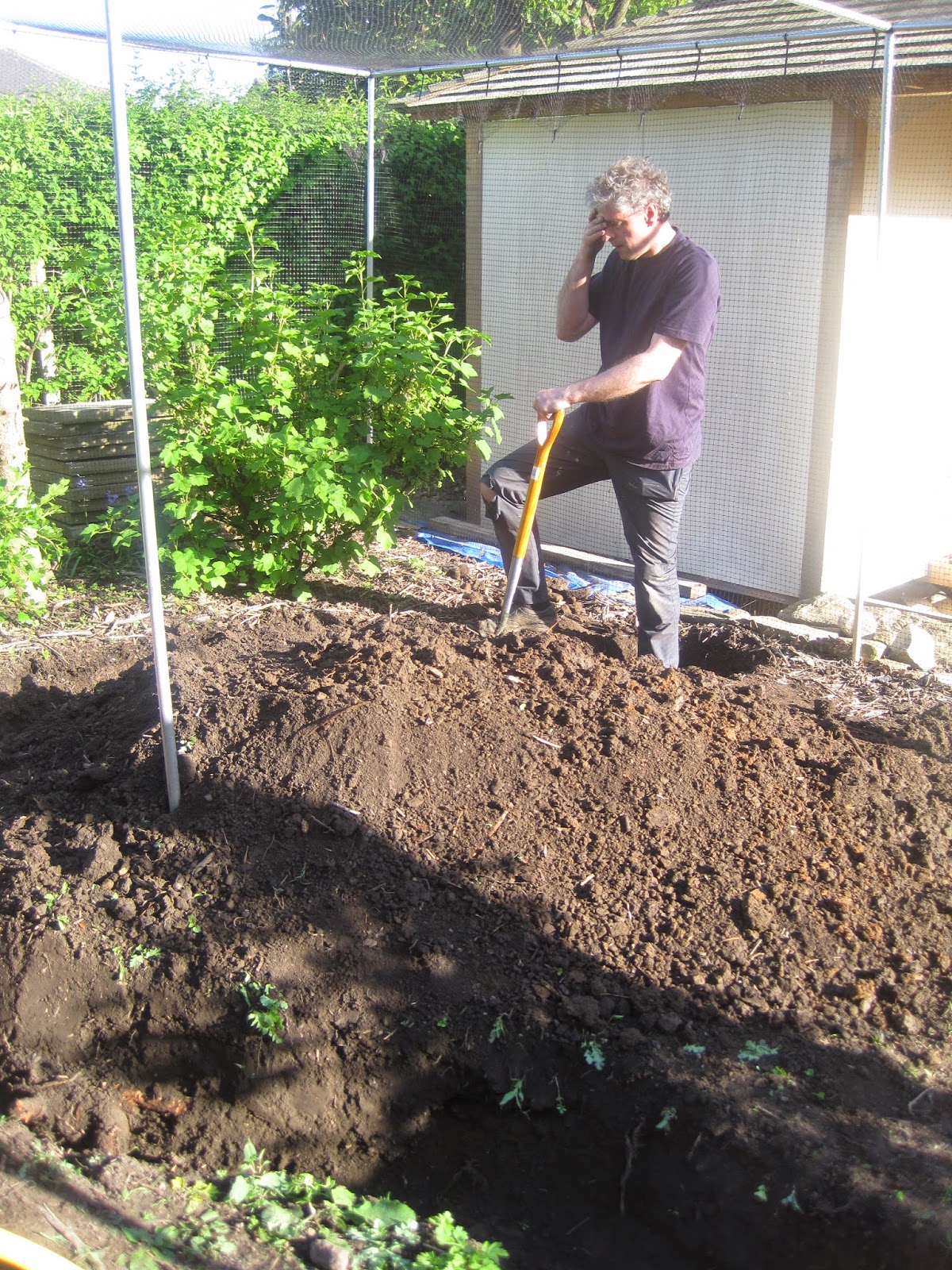 Once the path was dug to a  depth suitable for motorway foundations, Himself raided our sandstone store up the garden (which was created with what we'd dug out of the pond years ago!) and used that as hardcore foundations. I got him to pile all the topsoil up to create a 'mountain' for the path to curve round and to give that very flat area some topological interest (Ooh er, there's posh!) 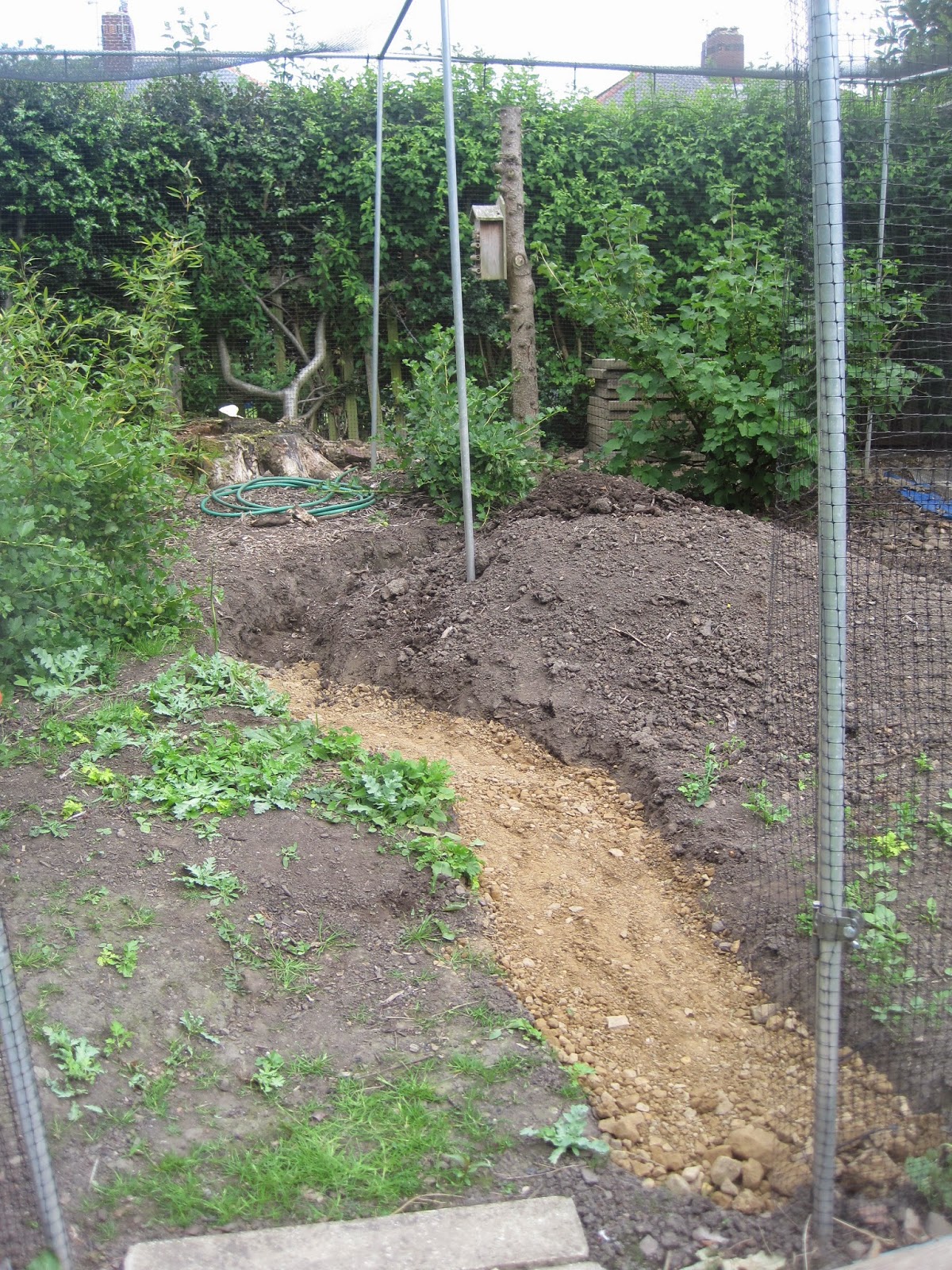 The mountain in the background. 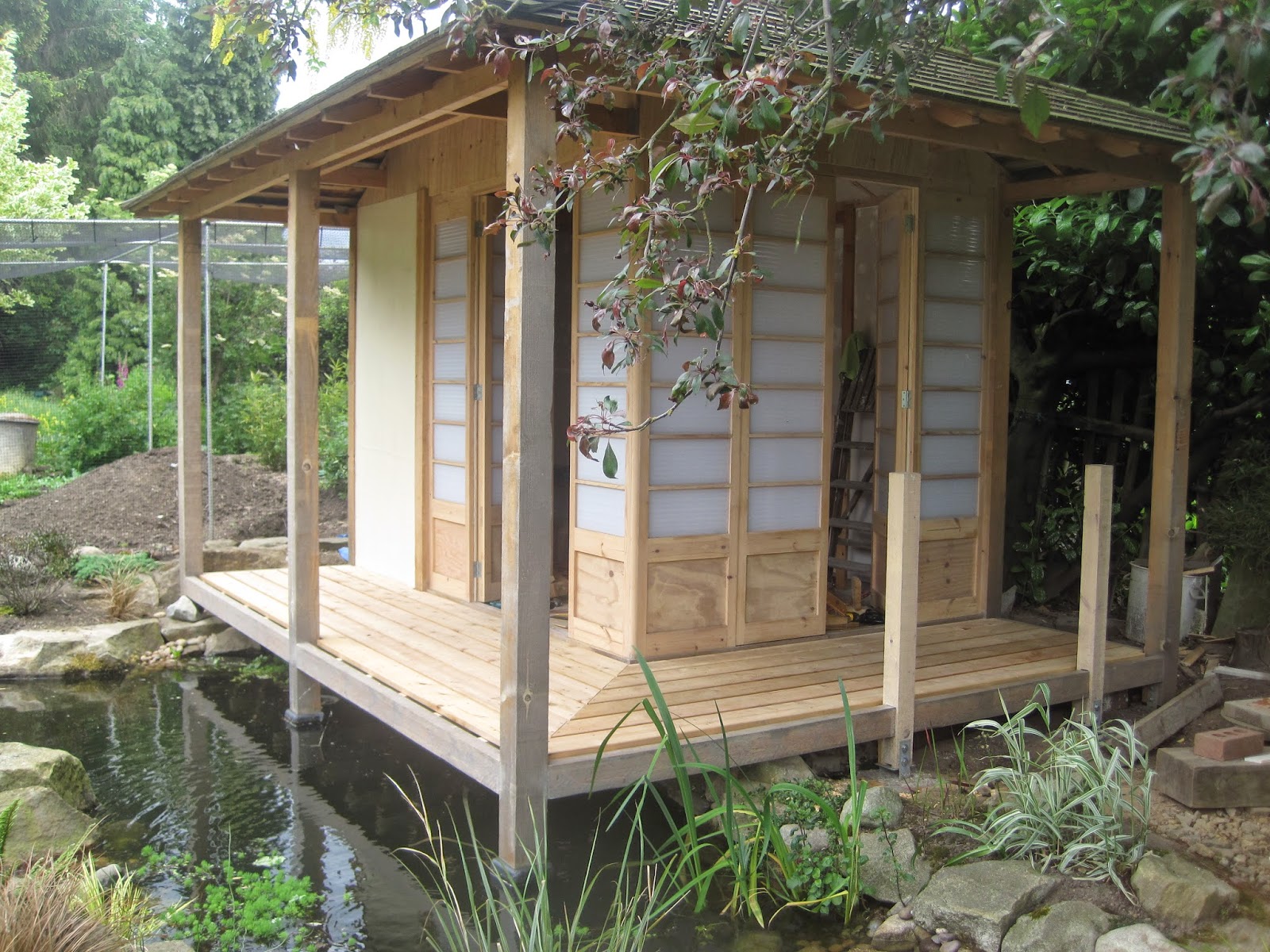 And, as usual, the new bit stayed like that for quite some time! Well, actually, that's not quite true! Being me, I couldn't resist a bit of instant gardening, so I pinched various grasses and ferns from other parts of the garden to use purely as temporary fillers, planted the Killmarnock Willow that our lovely neighbour, Tony, had bought us as a Silver Wedding anniversary present....... 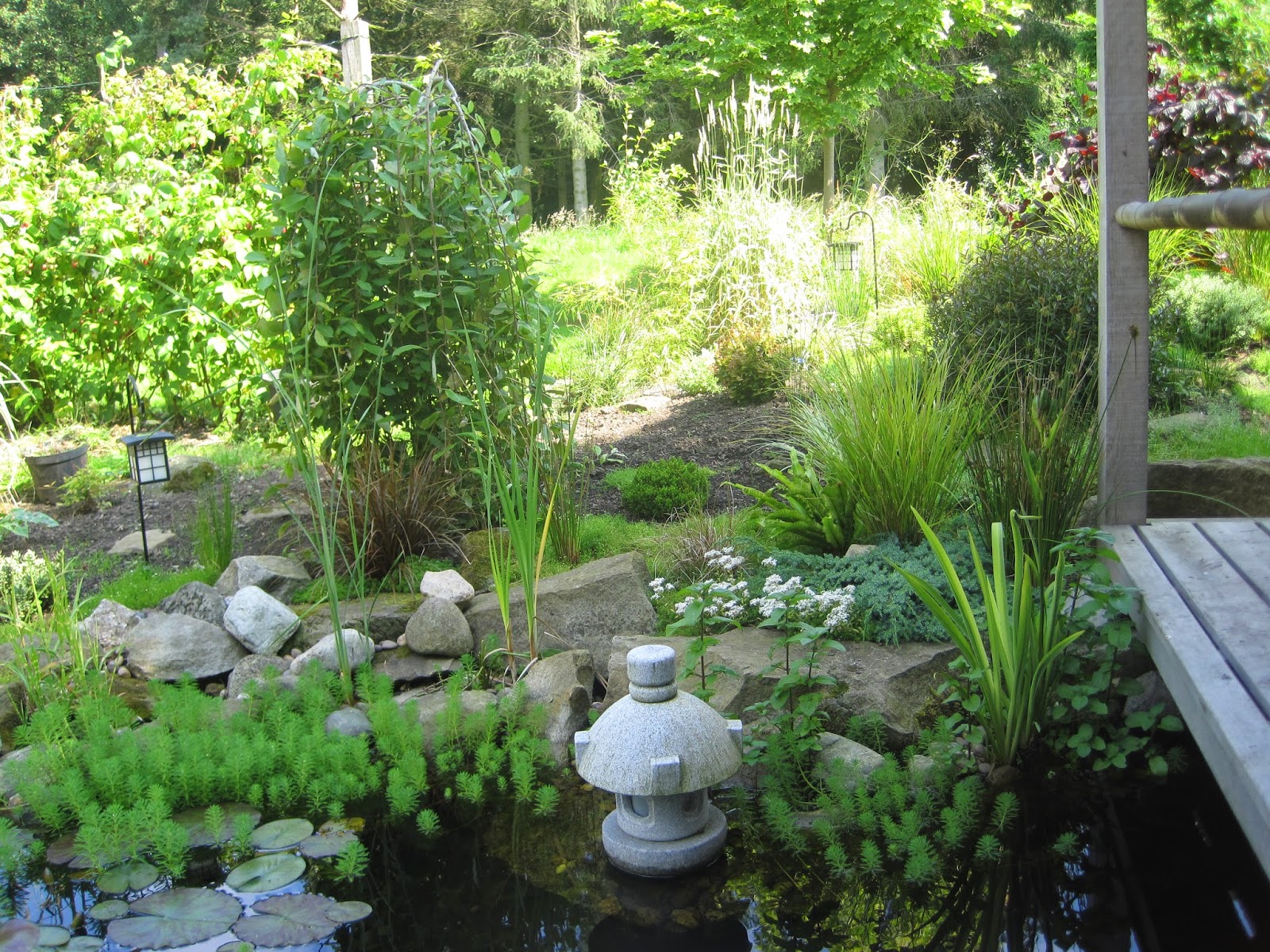 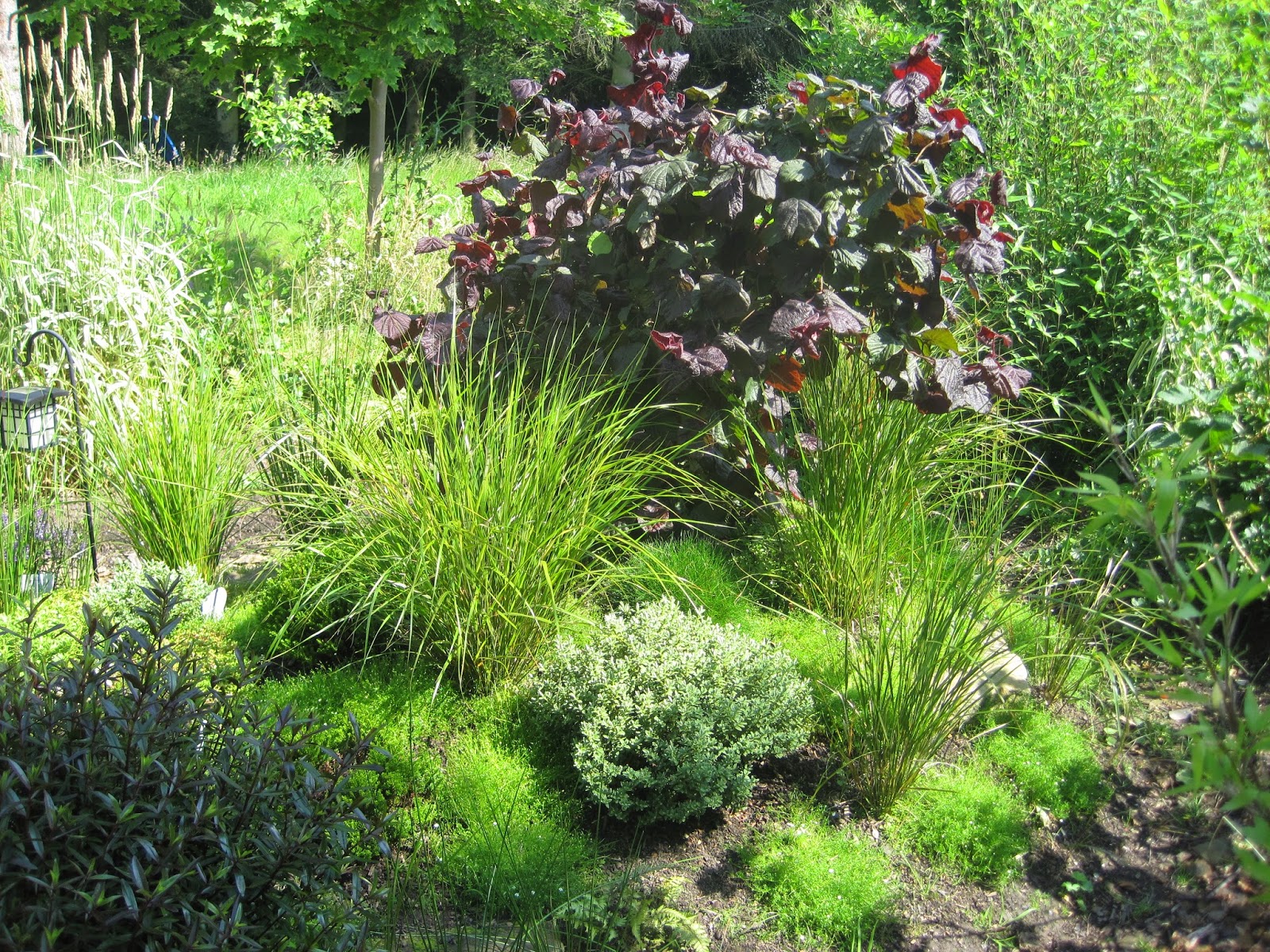 I then bought some Irish Moss as ground cover. 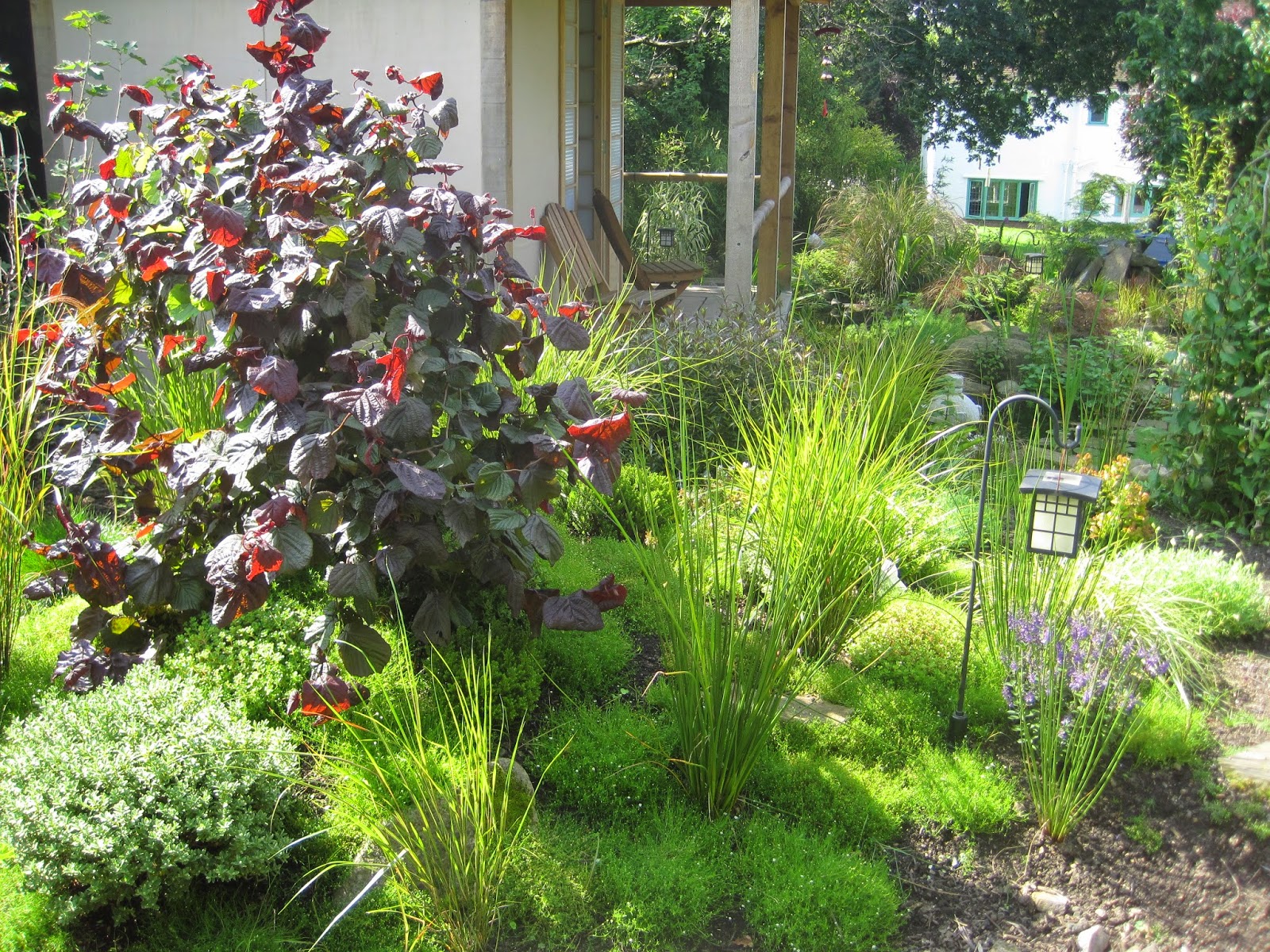 And I left it to get on with its own devices for 3 years until this spring!

I wanted to join up the now-not-so-new path to the veranda, so Himself had to move the huge rock that had acted as a retaining rock when the fruit cage had been behind the tea house, from its original upright position to a horizontal position to make a step from the veranda to the path.....no mean feat given the size and weight of the rock and we bent the scaffold pole lever - again! 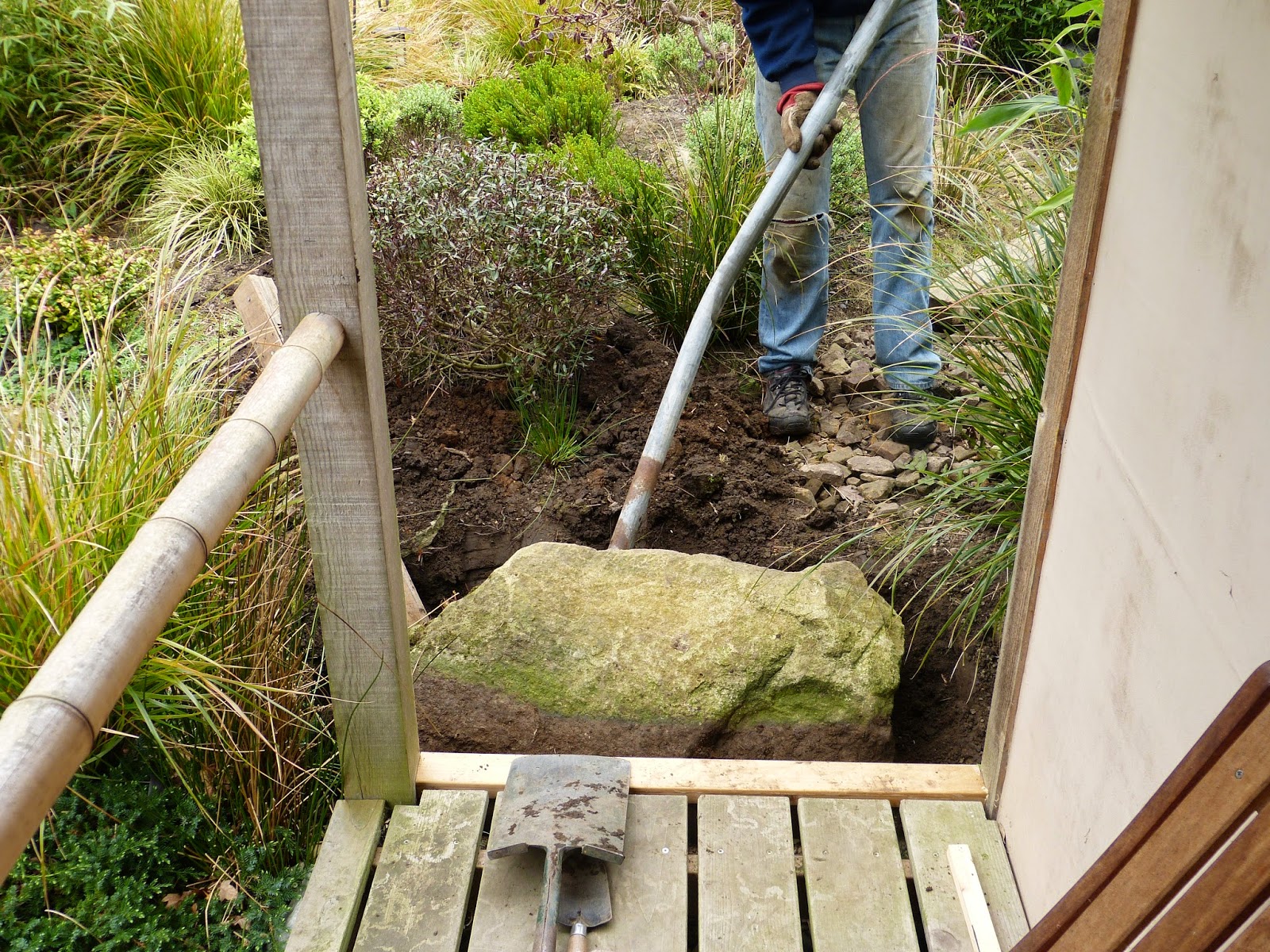 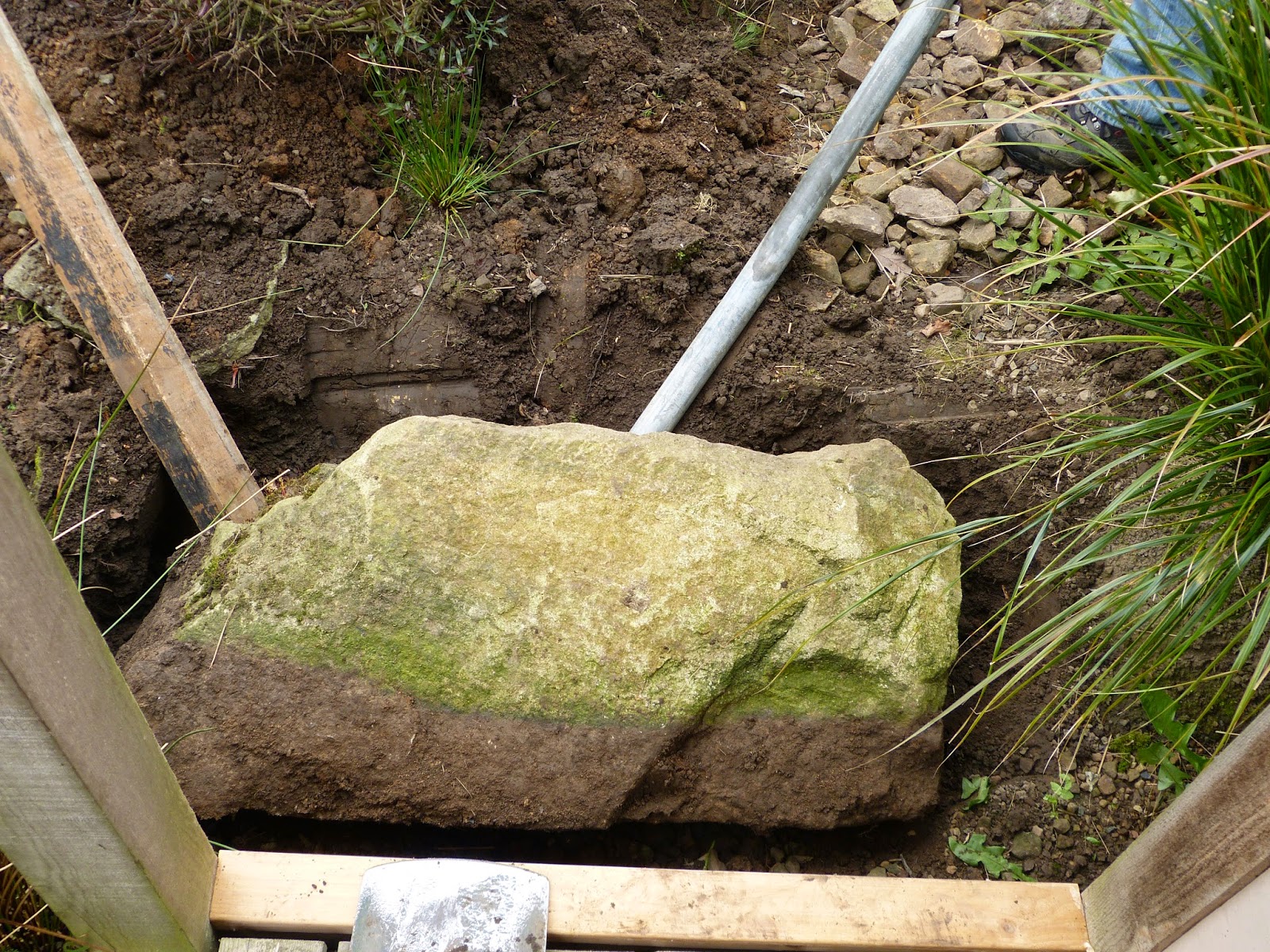 You can see here that the grasses have become too dominant and need to be moved - fortunately I appear to have got myself involved in the after-school gardening club at one of the primary schools we teach tai chi at, so the grasses have found a new home as part of the redesign of their raised beds in the playground ....quite useful that I was doing the redesign really! ;-) 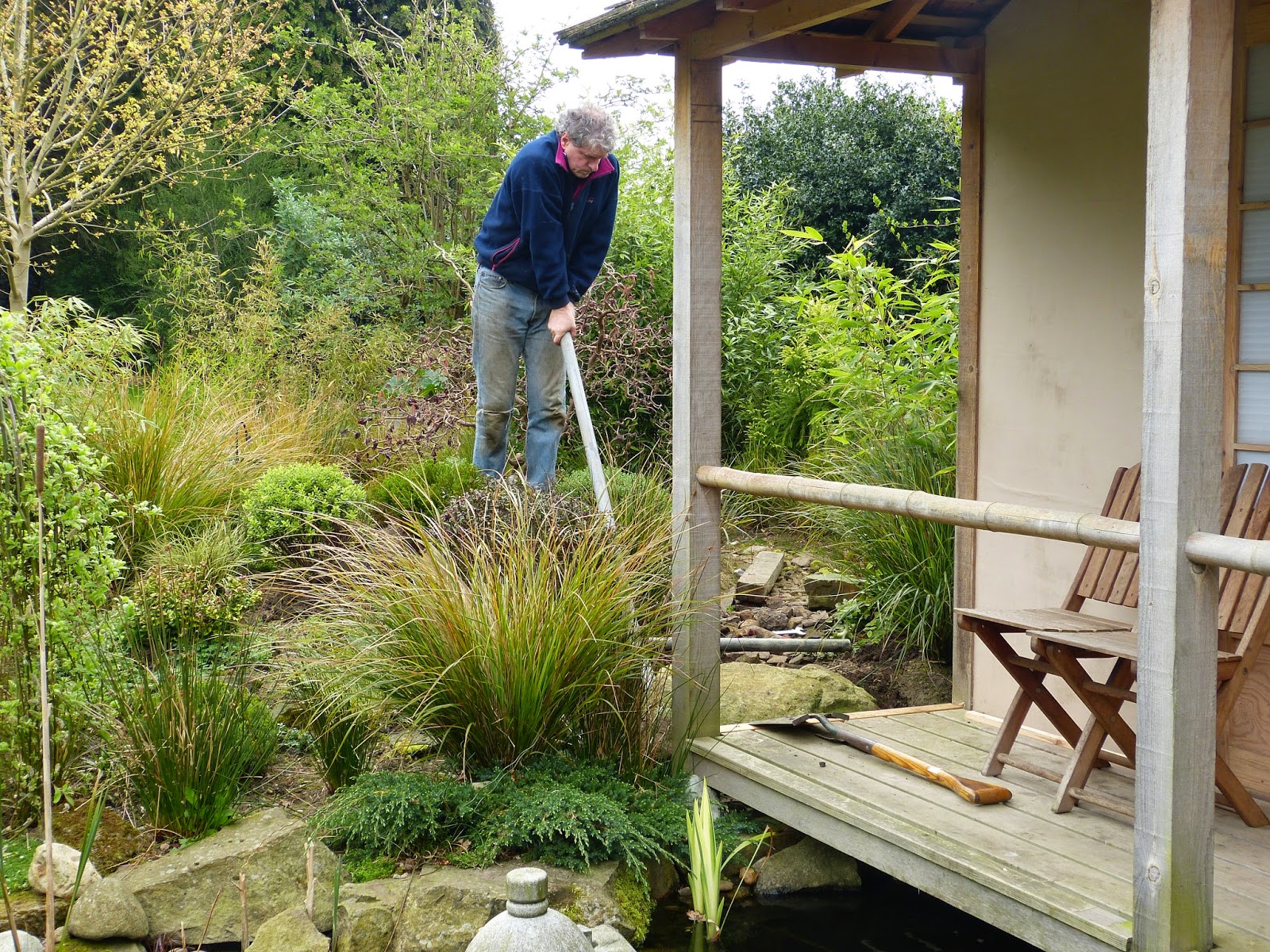 Anyway, the next few photos were taken yesterday - and our trusty bent scaffold pole makes a very good netting support to keep the leaves out of the pond. A bit over-engineered (as ever!), but it keeps Himself happy!

The grasses have gone, the hebes have grown, box balls have found a new home and the Irish moss, which worked well in the very wet summer of 2012, didn't like the direct sunlight of 2013 and died, so has been replaced by a creeping ground cover that I don't know the name of and don't have a photo of either! 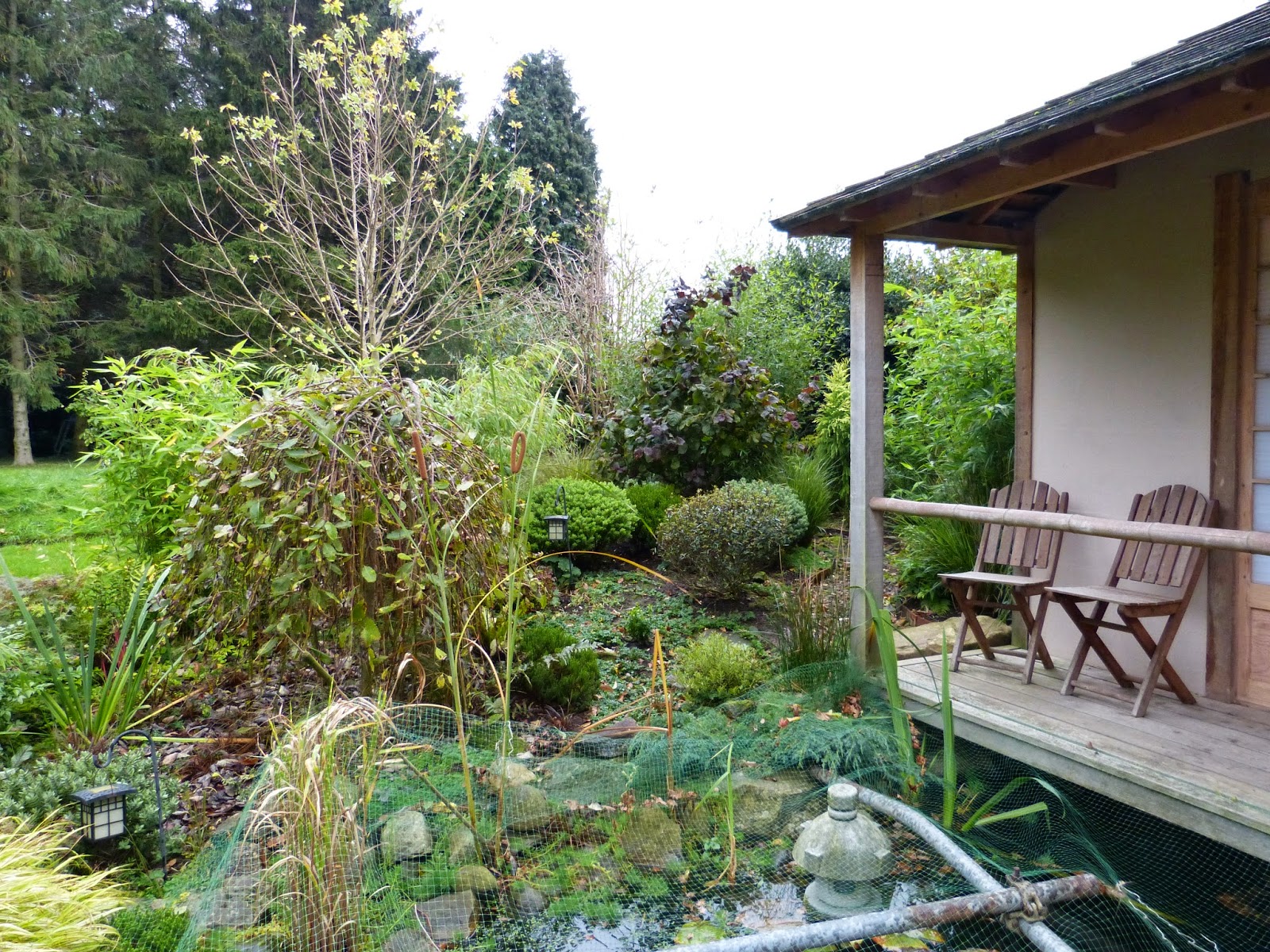 I've finally made a start on doing the path edgings - bought a load of old  roof tiles from the local reclaim yard for 35 pence each - bargain! The path, which will soon be covered in weed repellant matting and a thick layer of pea gravel to match the other paths, now joins the veranda step at one end..... 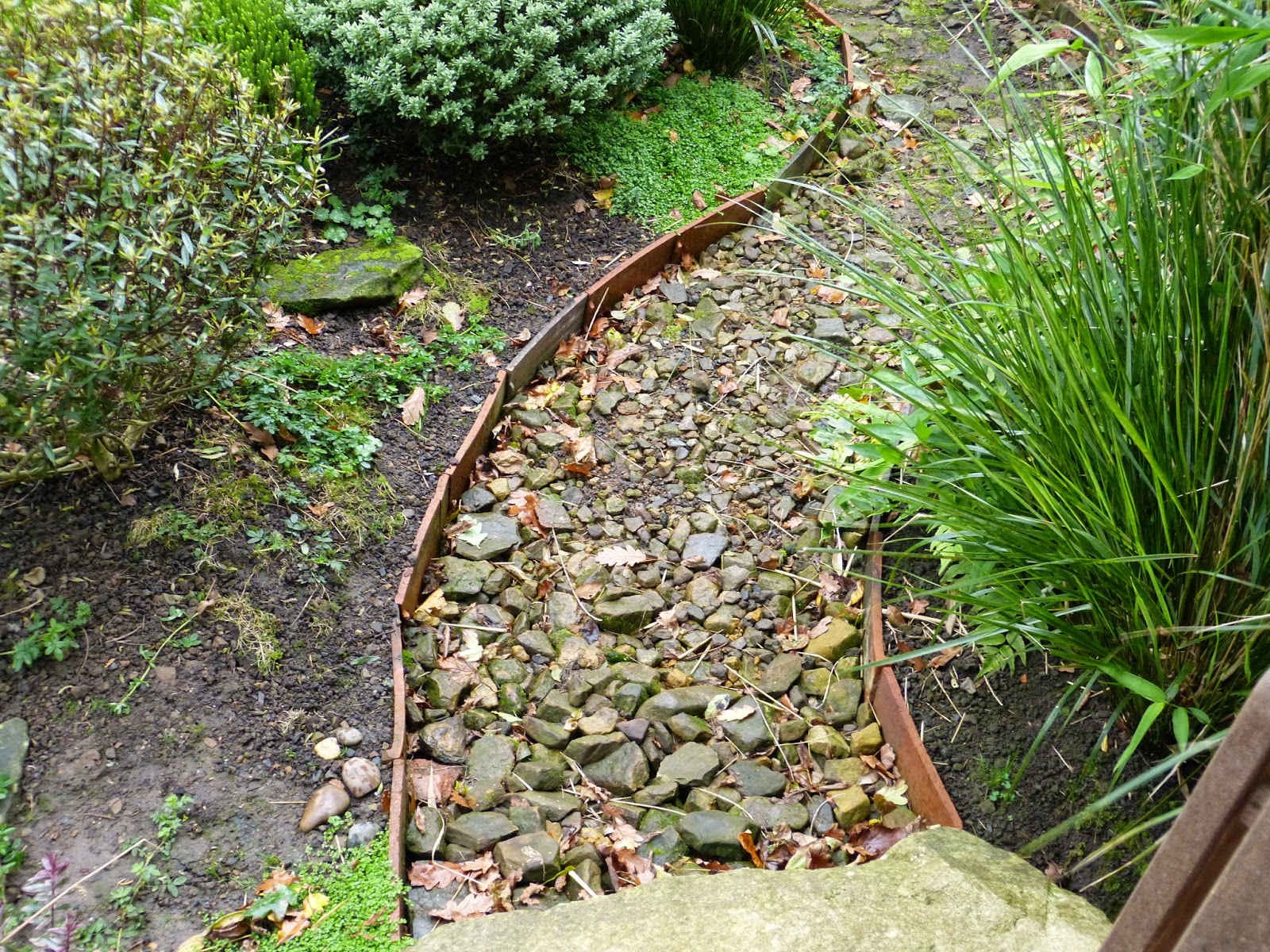 goes up to curve round past the twisted beech on the mountain..... 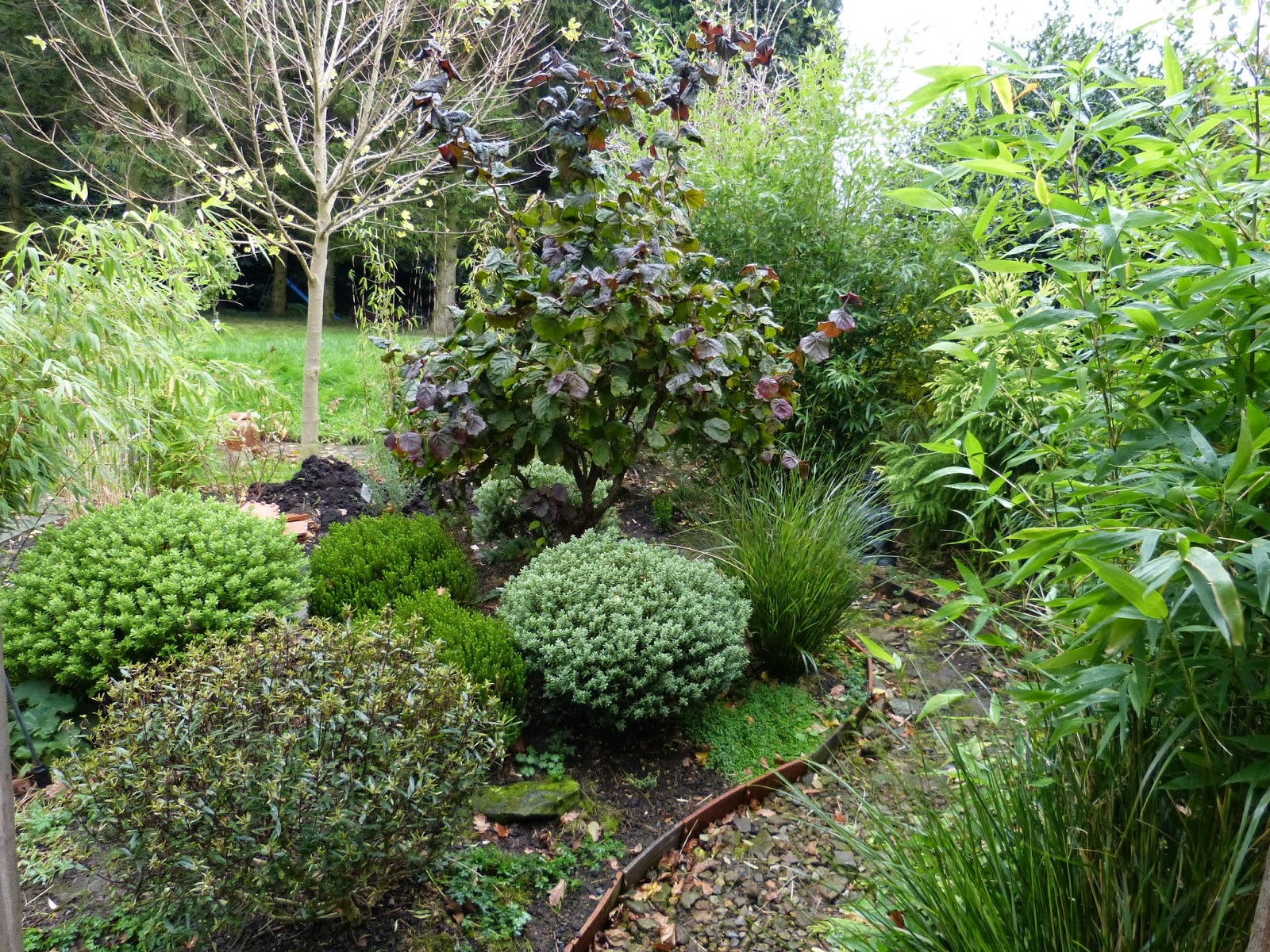 and has currently got as far as my lovely Buddha statue, which was a Christmas present from our best friends - they know me so well! 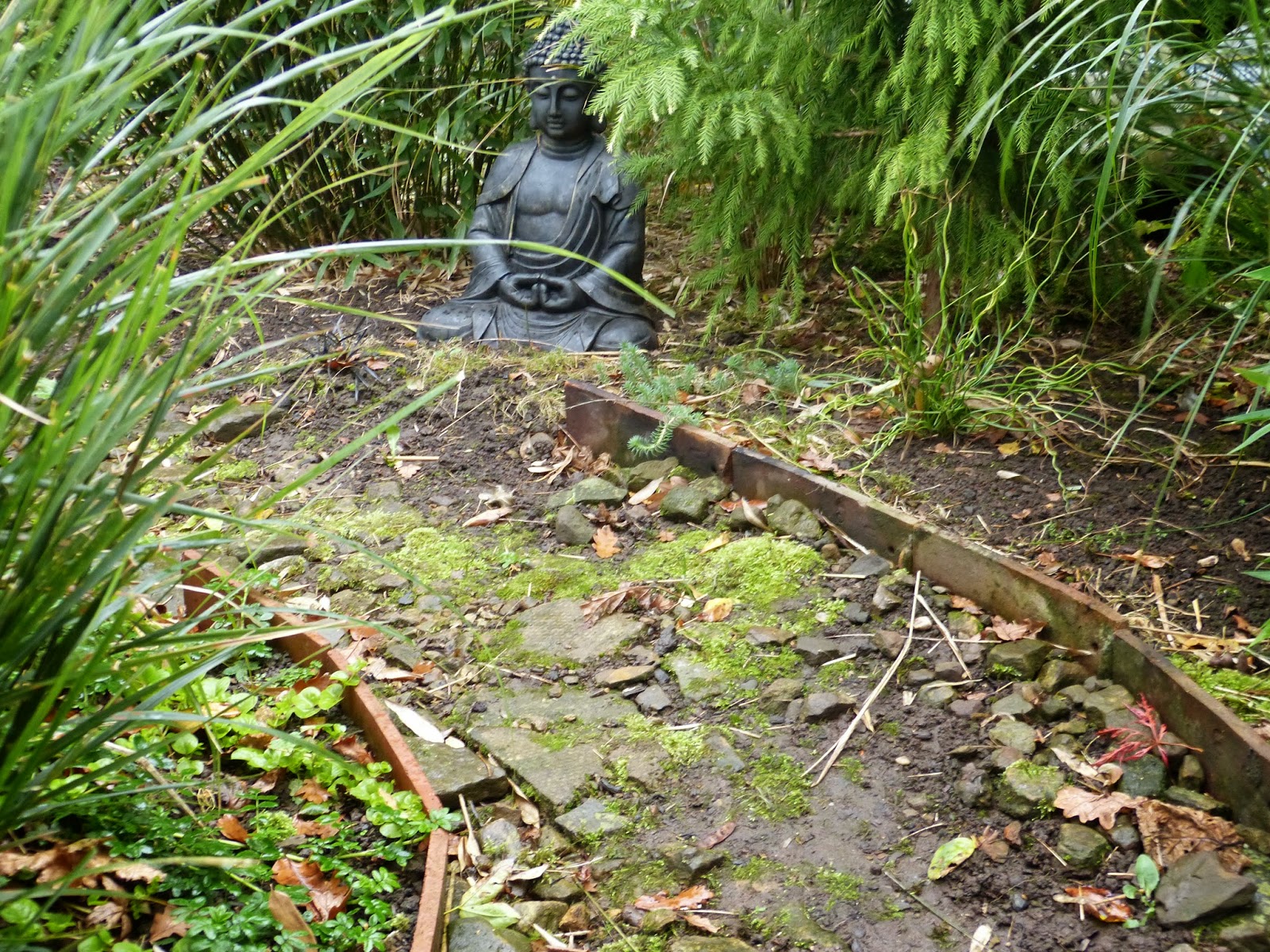 There is still a way to go yet though - but I'm hoping to get it finished off during the half term holiday next week if the weather is kind to me! 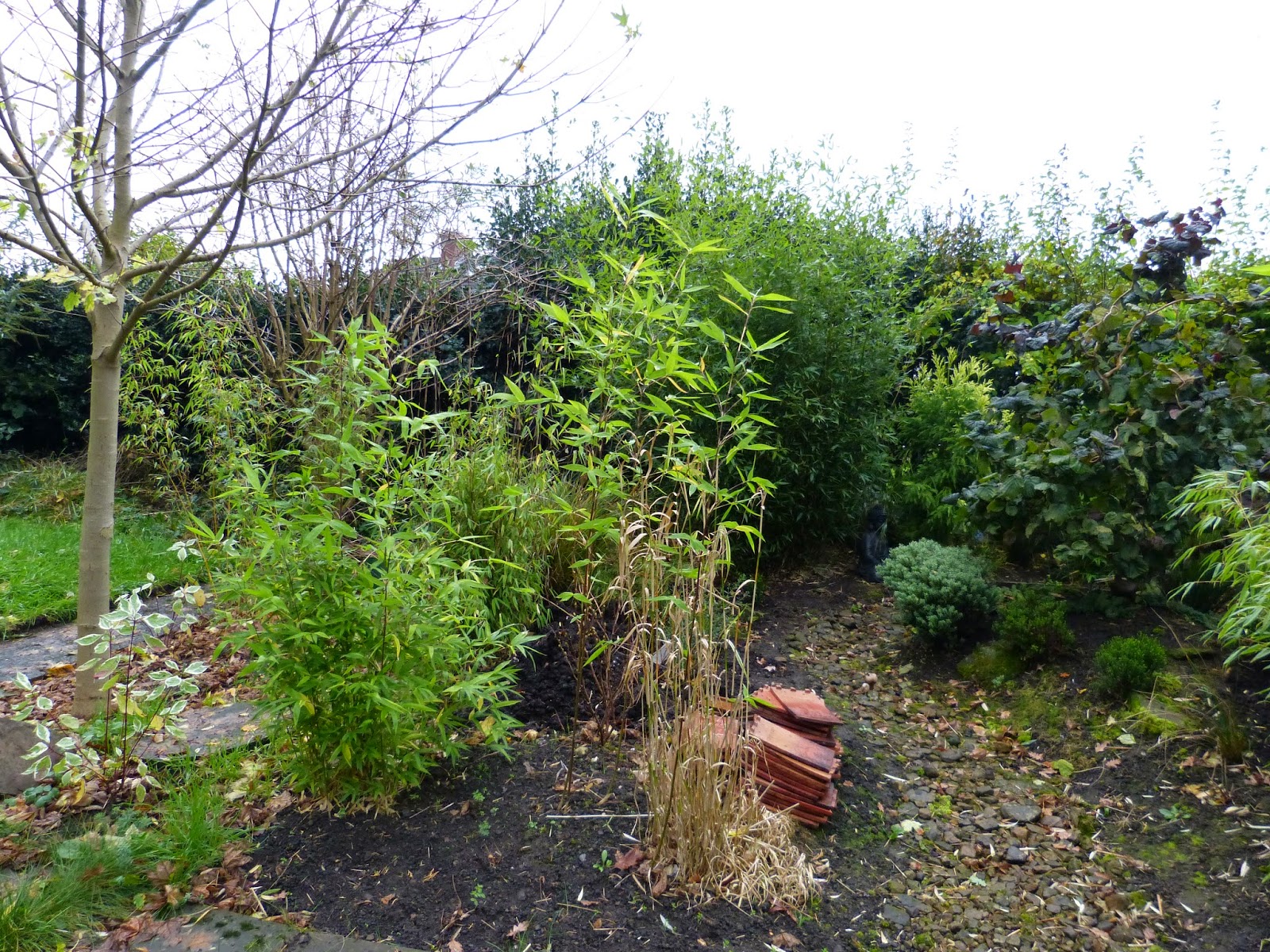 The sharp-eyed amongst you may have spotted a certain final bit of annexation! There was a metre (or so) beyond the back wall of the fruit cage that went up as far as the concrete path just behind the maple tree. This area was originally planted up with rhubarb and blackberries which appear to have moved themselves to the other side of the garden to be with the rest of the soft fruit ;-P

Various other bamboos, cornus, pieris, hebes and an acer have somehow appeared in the empty soil ...don't know how it happened!
I have now had very strict instructions from Himself that I am not allowed to annexe any more of the garden :-D
Posted by Nutty Gnome at 17:17 13 comments: