The roof, the whole roof and nothing but the roof!

Yeah, yeah. I know I said 'nothing but the roof' - but I lied!!!
First of all I 'd just like to say a big thank you to all the people who have popped up on my comments section, email or facebook to find out where I've been and to check up on me ........ I'm fine, I was just temporarily MIA.
The list of stuff I had to complete in the real world meant that my forays into the virtual world of blogland had to be temporarily curtailed until other proper deadlines had been met. But, as Arnie would have said if he'd thought of it ........."I'm back!"
The 'stuff' included watching Last-Born shine as the world's skinniest Tracey in a local production of Hairspray. I was so proud of her that I leaked tears throughout both the opening and closing numbers! She was magnificent and should clearly follow her dream to go into Musical Theatre - in my totally unbiased opinion of course! First-Born also gets an honourable mention here for the fantastic work she did on the costumes when she was home from uni for Easter - I think they would have been a bit stuffed without her!
I was also preparing to be inundated - which wasn't quite as painful as it sounds!
I had 10 family members in the house all this last weekend and a party for 40 people here to celebrate my 50th birthday on Saturday night. I'm still not quite sure how I got to 50 so quickly when I'm only 22 on the inside (make that 8 some days) and my dad swears he's only 33, but then maths never was my strong point! (or, as one of dad's friends pointed out, " yer dad's a lying bugger!!!")
I'm also not sure how, when it was my party to celebrate my birthday, I ended up doing all the cooking and preparation but, hey, I had a ball. I also got the world's best EVER birthday present............................................. a Tank Driving Day!!!!!
FANTASTIC!
I've always wanted to drive a tank!
Trust me. There WILL be a blog post on this once I've done it! :D
Anyway, back to the roof last summer!

Having got the purlin ring safely in place, Himself set about putting the waterproof, breathable membrane on the rafters. 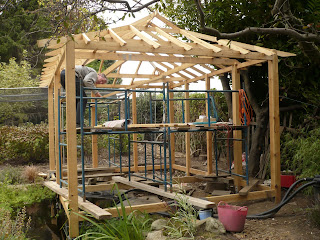 This involved him being able to use some of his clamps - which always makes him very happy for some reason that I don't yet understand ........... must be a man-thing! 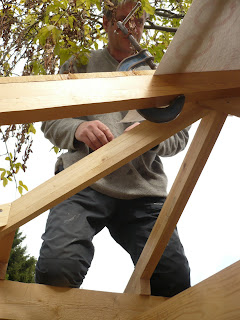 I was still clearing the holly jungle at this point, but nipped up onto the scaffold tower to do a bit of multi-tasking baton holding and photo taking! 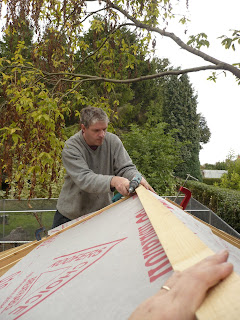 Having got the first baton fixed, Himself rapidly dispensed with my services and sent me packing back into the depths of dusty, spider filled holly and skanky old birds nests whilst he got on with laying more batons. 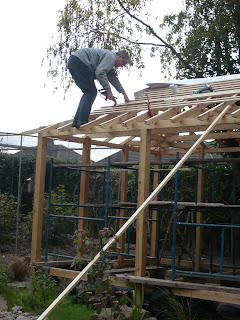 Even though the membrane is only covering the roof over my therapy room and not the veranda, the batons have to sit over the whole roof. They serve a twofold purpose of allowing airflow between the membrane and the shingles and give him something to nail the shingles onto. Good planning that man! :) 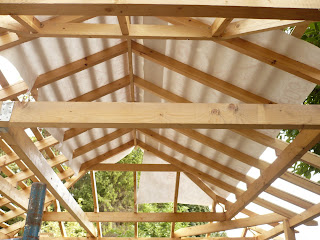 The tea house is beginning to settle gently into its surroundings. 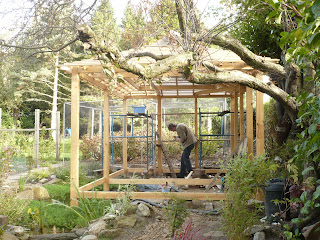 There was great excitement from both of use when the shingles arrived. Lovely Canadian cedar shingles - the smell of the cedar was wonderfully enveloping as I opened the plastic wrapping. 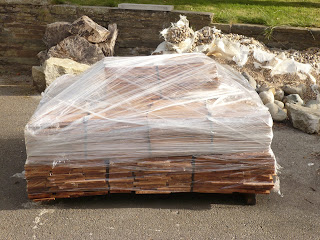 Now.In my defence, I have to say at this point that I had EVERY intention of doing the shingle roof myself! I had even told Himself I was going to do it - I planned to do an important part of the tea house rather than just being the mad ideas woman, gofer (you know ....... go fer this, go fer that!), lugger of heavy things and an extra pair of hands , but fortunately Himself is only too aware of my very low boredom threshold on repetitive tasks (except for weeding, but that's a completely different thing!) and so got started on it one day when I was safely out of the way doing something more exciting!
It's perhaps as well that he did - I would have been SO bored by the end of the second row and could never had got the level of accuracy on any of it, let alone all the beautifully mitred corners as he did. His commitment to detail and accuracy is unparalleled whereas mine is slapdash, to say the least! So, because of his ingenuity and foresight, we have a tea house roof that is a thing of beauty!
The first shingles are laid out. 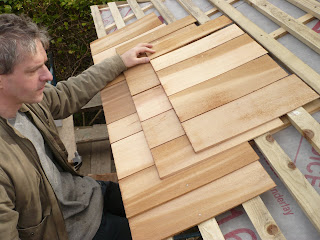 Himself made a jig frame to ensure that all the shingles were parallel. 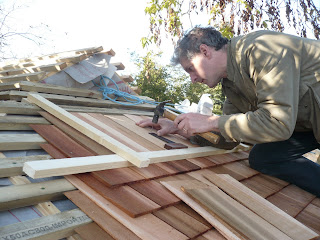 A complete row was placed and checked for size and thickness before any stainless steel nails went near them. 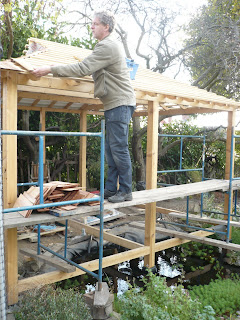 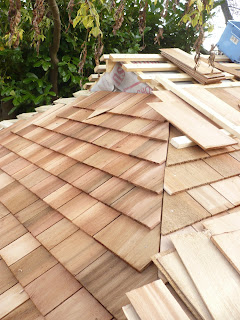 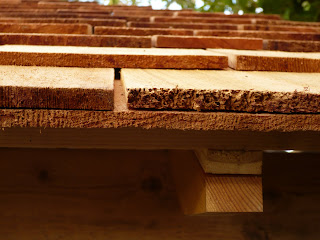 The ever wonderful Pete gave up yet another weekend to clamber around our scaffold tower. Himself and Pete made a good team - and Pete being a carpenter was a big help! Pete laid out the shingles, then marked and cut all the mitres whilst Himself nailed them on. They made cracking good progress that weekend. 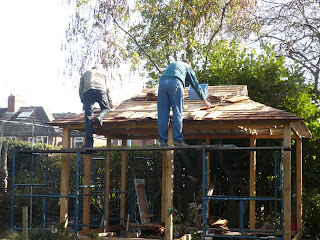 Working out how to do the ridge and hips. 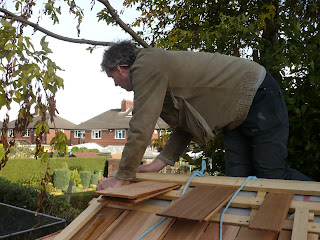 Moving round to the last side ....almost done! 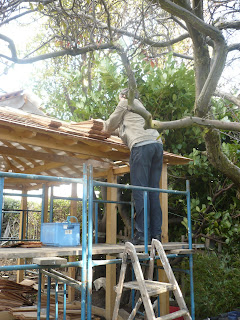 A pile of sorted shingles. 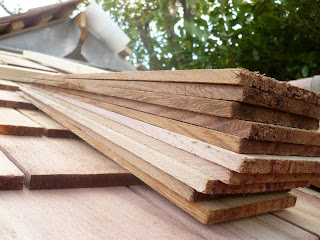 A work of art! 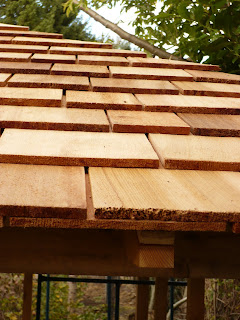 It even looks good from the inside! 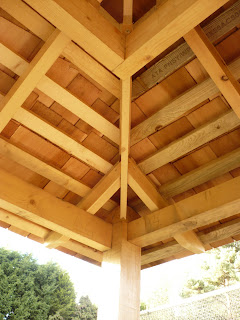 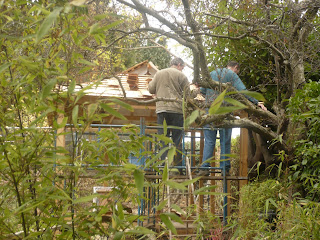 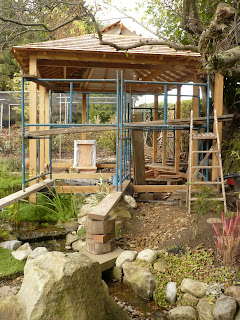 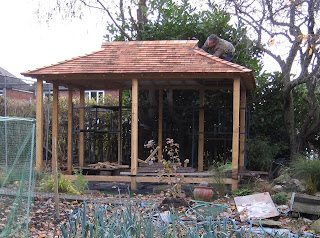