As many of you may well be aware, we have an unusually large garden for one so close to a town centre. It also runs parallel to a road, with all the gardens backing onto ours, so consequently we have 14 neighbours. Most of them are great - Tony next door is a joy, but the odd ones can be erm.... shall we say, a tad trying at times! There's 'Mr.Grumpy' at the bottom of the drive, 'Mrs. They've-Built-Another-Bloody-Eyesore' by the tea house and 'Mrs. Whinging-Bag' ("your trees have dropped their pine needles in my pond again") up at the top! But the ones we never expected any hassle from were 'that nice couple with the young children....I think he's a policeman' about halfway up the garden.

When I got a phone call from the local Council 'Tree Man' saying he needed to discuss an issue about our trees with me, I assumed Mr.Grumpy had been on at him again to try to get the Tree Protection Orders (TPO) rescinded on the two trees on our boundary by his house, but no!

"What was it then?" I hear you ask - go on then, ask!
Turns out that he'd had an email from someone - he wasn't allowed to tell me who (but it wasn't exactly difficult to work it out!), asking if the oak tree in our back garden had a Tree Protection Order on it because if it hadn't then the email suggested that they wanted to appeal to have it chopped down. The reasons for them wanting this were unclear at this point as the tree is neither dangerous nor dead, so.......

PANIC!
Once I'd calmed down a bit and started breathing again, the very nice Tree Man offered to pop round, have a look at the tree and discuss the options with me. I snatched his hand off and he was there within 10 minutes - who says the Council can't move swiftly when they need to? ..... and it was a Friday afternoon!!!

Here's my beautiful oak tree, as seen from Last-Born's bedroom window. It's slightly lopsided because 'that nice couple...etc' had asked permission from us to 'trim back' an overhanging branch, but then had lopped it so badly that we'd had to get our Tree Surgeon to sort it out - by taking the whole branch right back to the bole :( 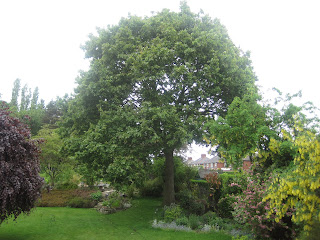 The Tree Man estimated that the oak is around 90-100 years old and, although they usually only put TPO's on trees in front gardens where they enhance the neighbourhood, he suggested putting a TPO on the oak tree to protect it. I jumped at the chance and by Tuesday of the following week, the paperwork had arrived with a 6 month temporary TPO for the oak tree.

Now we Brits just LOVE paperwork, but the Council excelled themselves this time! There were 14 (yes, 14) pages in the main document and 3 pages in the subsiduary document! The bits I liked best were:

any tree specified in Schedule 1 to this Order or compromised in a group of trees or in a woodland so specified, except with the consent of the authority and, where such consent is given subject to conditions, in accordance with those conditions.

I kid you not - this a word for word transcription. The other 13 pages list the exemptions, specifications, appeals system etc, etc, etc.

The photo below shows our garden (with the wobbly black outline - which kind of mirrors the wobbly boundary fencing!). It's the 1994 map showing the 13 trees in the front garden which were given TPO's at that time. The little circle marked T1 in the back garden is the oak ...spot where 'that nice couple..etc' might live?! 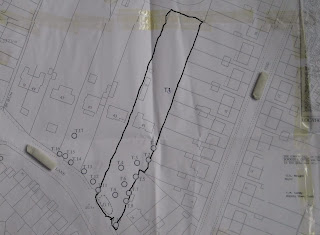 The Council have made the Order because:
1. It comprises one specimen tree, which significantly enhances the character and appearance of the locality. This tree is in a promininet position and can be seen from surrounding residential properties and from --------- Lane and ------- Road and as such it is considered an amenity to be enjoyed by the general public.

2. The tree is located in the rear garden of 41 --------- Lane and although not in full view from the public highway it is a tree of good shape and form and which contributes to the general amenity of the area.

3. The tree can then be retained as an amenity and effective control can be maintained over any future intentions for pruning or felling which may be proposed.

It's a 10 minute job to fill in the form for permission to do any work on the protected trees, about a week or so for the written permission to come back from the local Counciland about 3 months before our Tree Surgeon gets round to coming to do it, but that's another matter!! The work is then checked by the Council Tree Man as the Tree Surgeon is working and, as they say round here, job's a good 'un!

Here's another photo of our lovely oak towering above the Copper Beech (which is particularly gorgeous this year). I was standing on the Land Rover bonnet in front of the garage when I took this one - as you do! 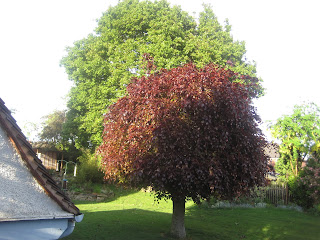 Oooops, forgot to tell you why they wanted the oak tree chopped down ........ apparently they don't like clearing up the leaves!!!

But it turns out that their selfish laziness has got them exactly what they didn't want and has ensured that the tree will remain standing long after they've gone.

Be careful what you wish for!

31.05.11 ADDITIONAL NOTE
The neighbour popped out to talk to me just now as I wandered up the garden. He wanted to apologise ...turns out it was "all a big mistake and a misunderstanding". He says he'd only asked the Council about TPO's because he'd wanted advice on trimming back branches overhanging his garden (and we all know what happened last time he did that!) and apparently the Council had ''misinterpreted'' it as him wanting the tree chopped down!
He was suitably apologetic and didn't want me to think he'd gone behind our backs or anything.....! Anyway, the Tree Man has been to see him and explained the procedures for any work on a tree with a TPO on it. He feels happy with that and he's not going to appeal against the TPO as he doesn't and, according to him, never did want the tree felling.
So there you go! :)
Posted by Nutty Gnome at 12:40 50 comments:

There have been moans from some quarters regarding the recent lack of posts about developments on the tea house - this was down to lack of progress because it got just a bit too chilly to work up there over winter ! 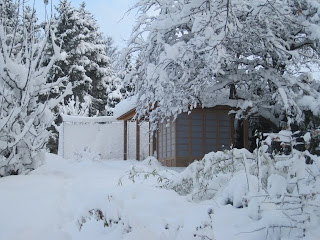 However, Spring has finally arrived and work is progressing again :) 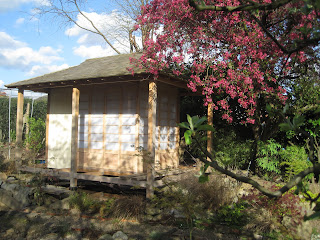 Himself, knowing how much I can gripe, whinge and moan if I'm cold, thoughtfully decided to insulate the entire tea house, ceiling and all - better now than having to come back to it later eh?! He started by cutting the insulation to size........ 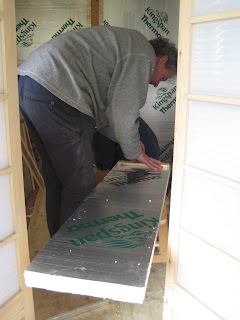 whilst the wonderful Pete measured, cut and fixed little batons to rest it on. 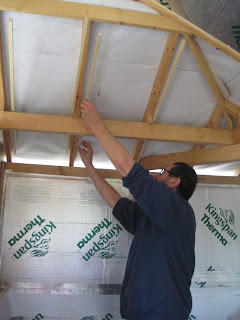 First side of the roof done. 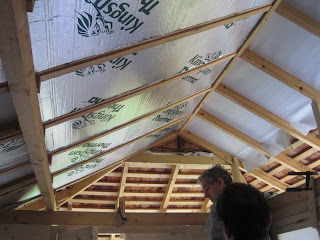 Whilst they were working away inside the tea house, I was busy forming the Brown Earth Society, creating lots of new vegetable and salad beds out in the vegetable garden - and getting distracted by low flying hot air balloons 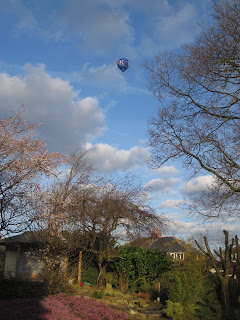 and the glorious rich colours on the Acer 'Shin Desojo', which has benefitted from its move out from under the shade of the Wiegelia where it had been languishing for a few years. 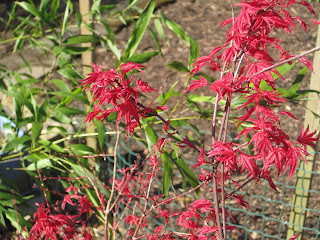 When the wonderful Pete returned to help out again a few weekends later, Himself had completed fitting the insulation, so it was time to tackle the plywood sheets that will cover the walls and ceiling, then it'll be ready for me to paint. This was a two hero job! (and, luckily, it was a lovely day!) 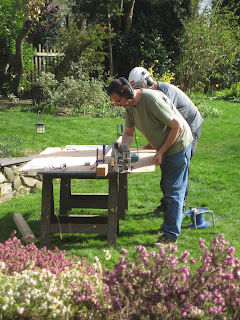 Happy with their progress. 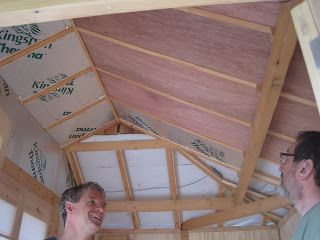 Himself doing all the tricky, fiddly bits he'd been putting off on the grounds that it might "all go horribly wrong!" ....needless to say, it didn't! :) 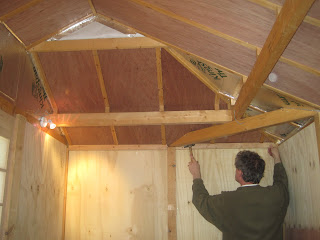 The tea house is now totally lined but I haven't got any photos of it completely finished yet as that bit happened over the Easter holidays whilst my camera was in America on a school trip with Last-Born!

The end may actually be in sight!!