...at least that what it feels like!
I seem to have been doing pond posts for ever and have promised to do this one on edging the pond for almost as long! (I've also had mega problems with Blogger not autosaving and have had to reload the photos so many times that I've been spittin' feathers in frustration!)
Anyway, we're here now and Blogger seems to be behaving itself, so we'll crack on. You may remember the saga of the pond extension but, if not, you can refresh your memory about it here. But if you can't be bothered to do that, here's a refresher of how the the newly extended pond complete with shelf looked last spring - yep, a whole year ago! 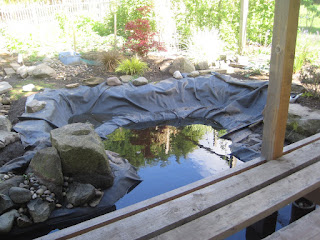 Himself carefully sorted out all the levels and edges so that they were strong enough for me to put multiple large rocks on. 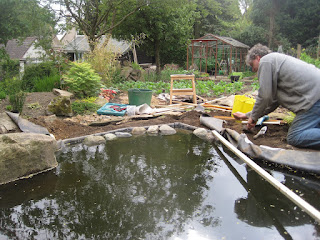 and, for reasons known only to him, he helpfully put a few rocks in 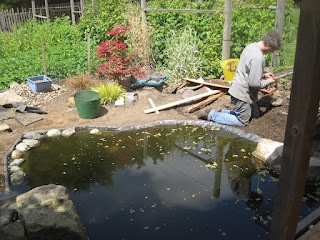 ........which I promptly removed!
My plan when pond building has always been to end up with it looking as natural as possible and with NO liner showing.....visible liner around pond edges is a pet hate of mine!
I began by building the beach area. This time I had learnt from my mistakes and had made the shelf slope upwards as it went out towards the middle of the pond - thus making it harder for the foxes, badgers, cats, squirrels, birds and other sundry small creatures to knock the pebbles and stones into the pond when they come to drink.
I put a layer of largish rocks on the shelf then added baby boulders, rocks and pebbles in a random fashion (you have NO idea how hard it is to do random with rocks when your head craves symmetry!!).
I also built back from the pond, over Himself's edge and onto the garden to make it look more naturalised. 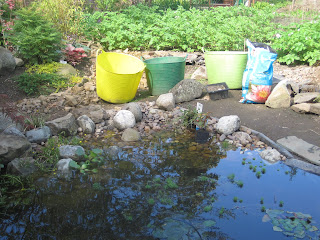 For the non-beach area, I decided that getting the plants into place first would be the best bet as I could then place the stones around the pots, making it look like they'd found little spaces for themselves ....and had absolutely nothing to do with me wanting to make it look more finished than it actually was!!! 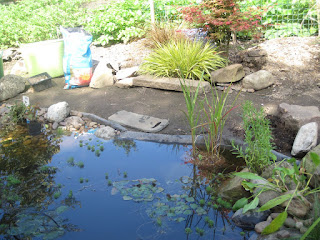 So I started at each end of the extension and worked my way to the middle, building up rocks on the shelf and garden - and mixing sizes and shapes as I went. I was very much working on what looked and 'felt' right for each place - causing endless amusement for and sarcastic comments from everyone else around me as this involved numerous attempts, multiple rock moves in and out of different spots and me running round to the other side of the pond to check the visual effects until I was satisfied it was right. Pedantic? Moi? 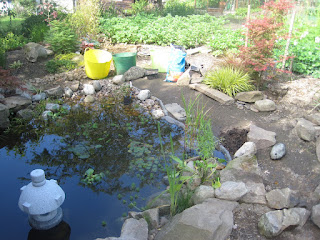 I also couldn't resist chucking a few plants into the middle of the pond - floaters, oxygenaters and a water lily which flowered in October, but there you go! 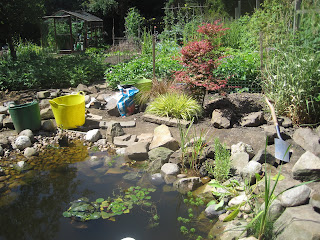 In the mean time, whilst I was faffing about with rocks, Himself had put a Japanese lantern into place on the newly built promontory which was the combined result of not being able to dig out too close to the wacking big rock that we'd hoisted into place originally and me wanting a lantern sitting in the water.
Did I ever do a post about Himself fitting the Japanese lantern? A work of art and my Reincarnated Victorian Engineer was in mini heaven working it all out - and, yes, it does have a light in it! 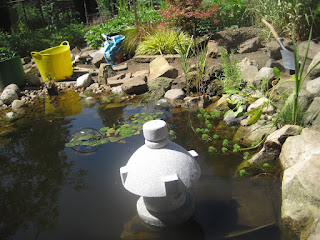 Of course, once Himself had got the lantern sorted, I had to make sure no liner was visible! 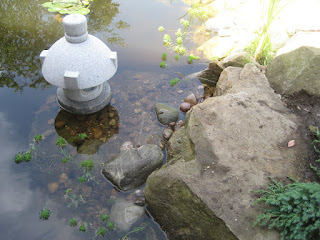 and planting around and close to the edges of the pond began to happen. Yes I know most people would have finished the pond before starting the planting - but I have never been most people so it happens in the order that I fancy doing it! 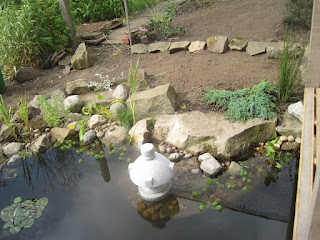 I lugged moss-covered rocks from other parts of the garden to create a 'pre-aged' feel to the pond area.
The black tray with plants in on the right near the watering can is full of Sagina Subulata (Heath Pearlwort/Irish Moss) which I am using as ground cover. Proper Japanese gardens use a wide variety of mosses as their ground cover, but apparently they don't have to contend with squirrels digging it up all the time!
The Pearlwort plugs were planted about 9" apart and will gradually join up to form a carpet of greenery that will become sort of springy and bouncy according to the bumph. I've got another 100 on order to come next month and as I can split each one into two I should get most of the new area covered....hopefully! 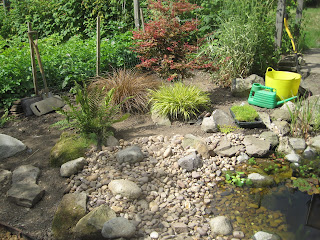 The pond was finished in time for The Big Bash (which, as we all know, was the real catalyst behind us getting stuff done last year!). It also came in useful for a photo shoot when Last Born and The Drummer Boy were off to their Year 13 prom a couple of weeks later! 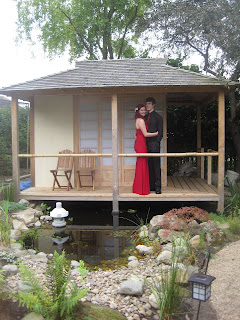 The pond from the waterfall end in late summer. 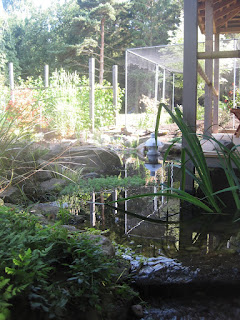 The pond yesterday.....with the plants just beginning to green up from their late winter stage, but with beautifully clear water again. Himself takes the Oase filter out every winter (as per the instructions!) and the water gets very very murky. A mere 24 hours of filtering gets it crystal clear again. It was quite expensive as I recall, but well worth it!
It's so clear you can see one of the frogs. No prizes other than a slightly smug sense of satisfaction for spotting it though! :) 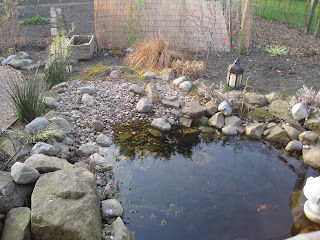 The Weeping Willow 'Kilmarnoch' was a Silver Wedding anniversary present from our lovely neighbour last year. It's going to fill that space beautifully. 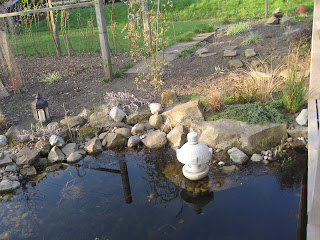 There's lots more work going on around the Japanese garden at the moment but, as ever, that'll have to wait until another day! I sometimes have days where I have a vague notion about just sitting in a finished garden and enjoying it without the urge to pop and weed something or shift a plant a two that have found themselves in the wrong place ;P
When those days do strike, I tend to wander the web looking for inspiration about what I'd actually sit on or how I might redesign bits of the garden to make it even better (!). One such wander took me to Robert Bridgeman's site at http://www.bridgman.co.uk/blog/ ...take a minute to pop over and have a look - you'll find yourself drooling at some of his ideas. Or is that just me?!
Posted by Nutty Gnome at 18:56 31 comments: