Why, in this season of peace, love, sharing and goodwill to all men, would someone want to torch our potting shed on Christmas night?
The outside 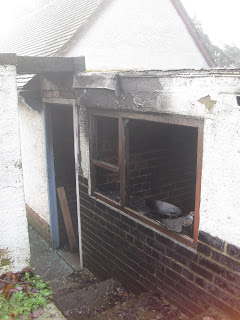 Looking through the window. Immediately under the window was a large wooden potting bench - as long as the window, about 3 feet wide and 2 inches deep. Gone. The facing wall had contained 3 full height shelving units with the world's largest collection of plantpots. The 2 charred remains of planks had held 3 propagators - 1 electric and 2 large normal ones, all of which have melted completely away. 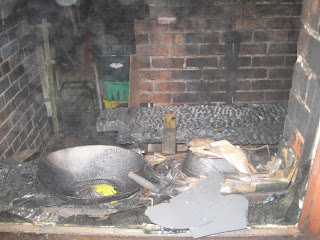 Looking in through the door - and, yes, that is a semi-melted Black and Decker strimmer in amongst the paint explosion. 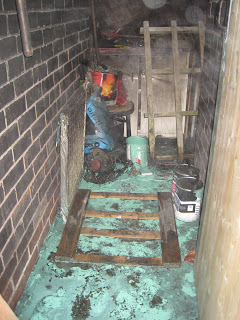 The corner under the window - where the fire was started. The fire officer thinks 'they' put or poured something flamable through the louvre window. That's the mangled remains of a petrol leaf hoover, the triton workbench and other as yet unidentified 'stuff' plus the ash of the potting bench. 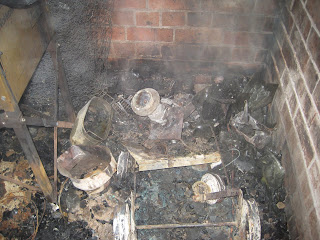 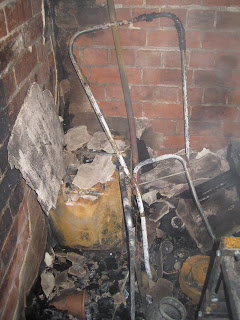 All that remains of about 50 metres of hosepipe. 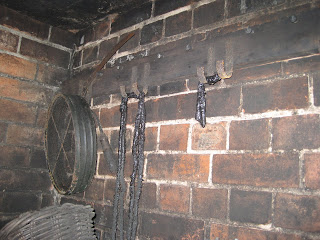 I couldn't bring myself to post any more depressing photos, but I can console myself that it could have been so much worse.
Happy Christmas.
Posted by Nutty Gnome at 18:09 38 comments: 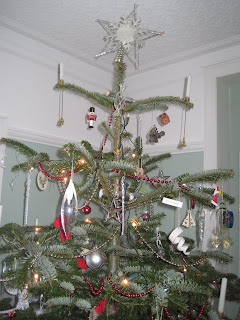 Merry Christmas to all of you - friends old and new from near and far who have visited my blog and left comments for me. You have made me laugh, made me cry, inspired me to better things (mainly photography and writing!) and allowed me to peek into your lives and pinch ideas and gardening skills. I thank each and every one of you for your kindness!
Soppy bit over now! :)
The snow continues unabated here......... 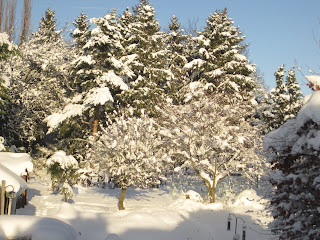 With just the occasional attempt at a thaw 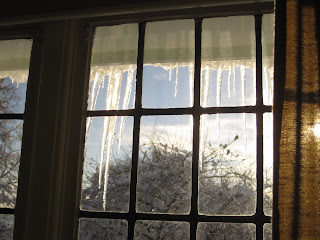 and although Ceefer cat no longer hates the snow, he has proved to be useless at hide and seek! 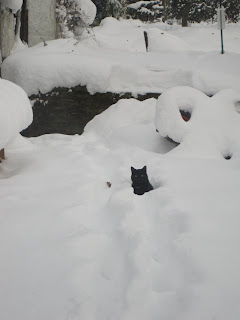 I think I know where Narnia is!

Snow started falling on Monday - the first time we've had snow in November in the UK since 1993 apparently. That didn't bother the snow - it just kept right on falling...and falling....and falling until it was the heaviest snowfall for 33 years - not that I cared about statistics.
IT WAS SNOW. I LOVE SNOW!!!


I opened the front door to find a tsunami of snow greeting me - doesn't look so big until you consider there are TWO steps down from the front door to the terrace! I realised that the last time we had snow like this I had ended up in Narnia. Could I do it again? Was it possible now that I was an adult - albeit an adult with an inner eight year old?! 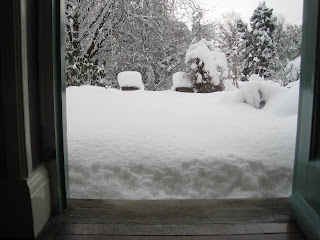 The inner 8 year old wussed out at stepping down into 2 feet of snow so, stopping only long enough to don 3 layers of thermals, 4 pairs of socks, coat, scarf, hat and 2 pairs of gloves, I left swiftly by the back door - a gentler route into the whiteness beyond The House.

The world was quiet and still as I ventured forth and decided to head north to start my search for Narnia. Briefly the sky cleared. I saw tree tops ladened with snow. The snow was deep, but I waded stoically onward..... I worked my way slowly up steep slopes and passed trees with their boughs bending under the burden of the snow. 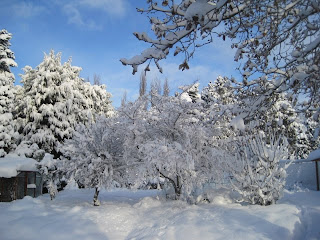 Moving yet further north, I paused to gather my strength and, as I did so I spied a fairy ring - a table and seats in the shelter of the trees. Was this Narnia? 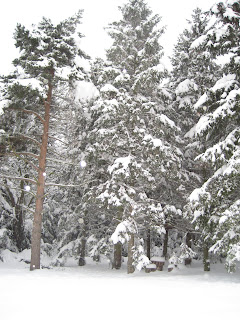 I remembered that beyond these trees lay wild animals and I was afraid to go further in case the foxes or badgers jumped me. I couldn't see a lamp post and Mr. Tumnus was conspicuous by his absence so, with a heavy heart (and just a slight sigh of relief) I turned south east.
As I pushed my way through the deepening snow I found one small splash of colour in the overwhelming whiteness of the land...an Acer 'Shin Deshojo' bravely peeking up above the snow and guiding me on my way. 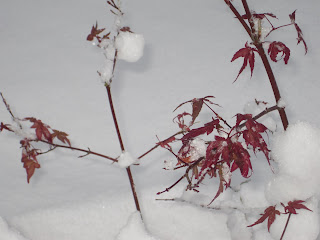 I paused again to consider the beauty of the snow on the gnarled old apple tree (- but actually it was just an excuse to to get my breath back. It's surprisingly hard work wading uphill through snow!) 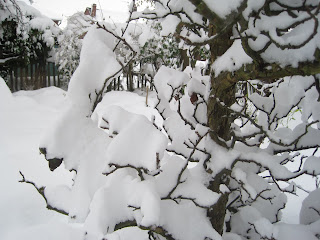 before resting for a while 'neath the shelter of a conveniently located tea house as I scoured the land around me in hope of finding that flippin' lamp post. 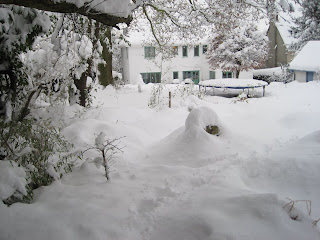 I moved on, but the Ice Queen's grip on the land was strengthening, I was loosing my bearings - I instinctively knew I had to keep heading south/south east, but I vaguely remembered that that involved going down some steps and I no longer knew where they were ... I felt they were somewhere close, but as to where - I could no longer tell. I paused, confused and disorientated.... 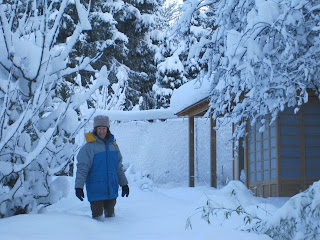 but then, stepping slowly and cautiously forward, I located the steps and managed to descend unscathed - a tricky business I can tell you, I nearly went base over apex more than once. 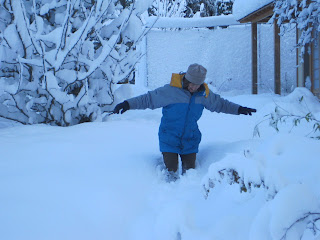 I shook in terror as I found myself wandering in the barren wastes of Lawnland, lost until I came upon Bench and Table, buried and unloved yet still hoping for someone to remove the weight of winter from the Ice Queen's grasp. 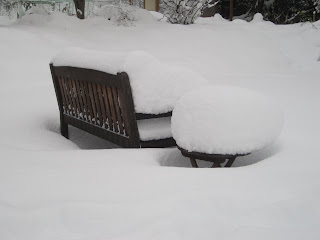 To my horror I realised that I had veered way too far west in Lawnland and was at risk of arriving in that most terrifying of places - The Herb Patch!
I swiftly took my bearing from the weak winter sun as it all too briefly showed its face. I headed due south once more and soon came across a fellow traveller. We paused to exchange thoughts on the whereabouts of that dratted lamp post and Mr. Tumnus, then I smacked myself firmly round the head - the snow and cold were getting to me. I was talking to a garden sculpture...the Ice Queen was winning! 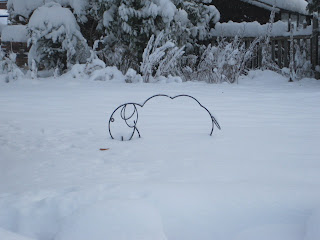 Altering my course to the south west away from my new found friend, erm *cough*- garden sculpture, I laughed hysterically in relief as I spotted The Bird Feeders. Moving precariously down the now invisible slope between the two posts I knew I was back on the edge of Lawnland (and possibly my sanity) and close to The House - but still no sign of any bloomin' lamp post. 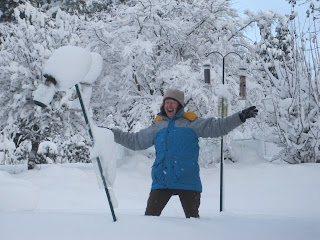 I headed due south down The Drive, keeping close to The House. But wait! My way was blocked - was this the Ice Queen's evil doing? Was I getting too close to the lamp post even though I still couldn't see it??? 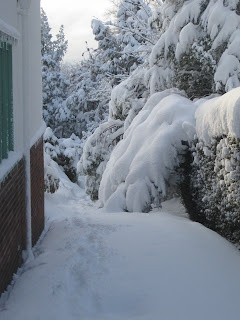 Popping briefly back into The House, I warmed my toes, ate chocolate (purely for the energy content of course), nipped to the loo, then peered out of The Bay Window, hoping to gain insight into the blockage on The Drive. It was worse than I'd imagined.
The Ice Queen had made the trees bow down before her and surrender to her will.......... I'd have to fight my way through - was I strong enough? Did I care enough?! 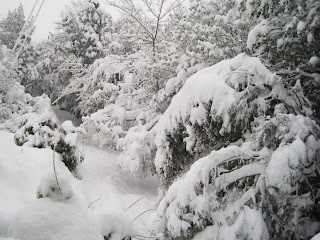 But I had no choice if I was ever to find Narnia before the sun went down. I HAD to go back out.
Returning to The Drive, to my surprise and delight a beautiful young woman was waiting to help me in my quest. Was this a sign?
(No, it was Last-Born, armed with a broom!) 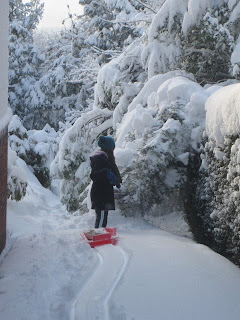 She battled heroically against the snow, wielding her trusty broom with gay abandon and releasing the trees from its icy grasp whilst I stood well back out of range of avalanching snow - I'm not daft!
As the trees shuddered back vaguely upright leaving the path clear-ish for us, I though I heard a distant scream of rage from the Ice Queen ...but it turned out to be a very angry magpie who'd been de-treed by Last-Born's broom attack! 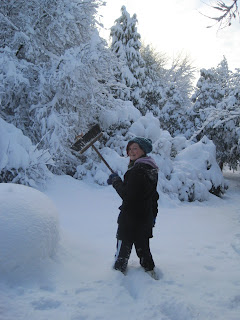 Free now to move forward, sure that Narnia lay before us and feeling that success was within our grasp, we surged south - well, when I say 'surged', it was more of a sluggish waddle, but then! Lo!
We'd found Narnia.............it's at the bottom of my garden! 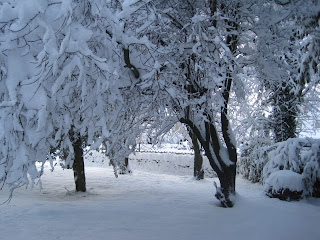 Last-Born gazed around in wonder at the beauty of it all. 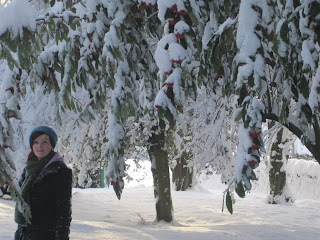 I gazed around in frustration...where the heck was that flamin' lamp post? 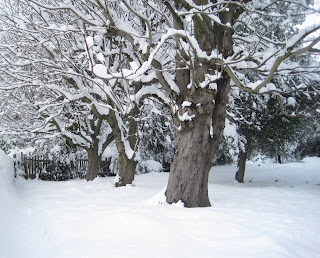 And then I spied it ....the modern equivalent. The guiding light to get me home.......
My Land Rover! 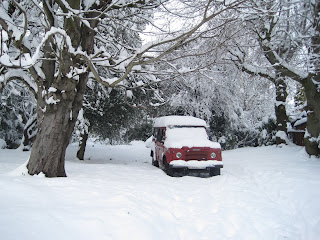 Now I know where Narnia is I can come back any time, so sod the lamp post - I'll buy one
in spring!
Posted by Nutty Gnome at 16:57 36 comments: