Life In A Time Warp!

Okay, look, I know - and I'm feeling guilty about it, alright?! I haven't posted in forever, I missed doing my Christmas and New Year post altogether and it's suddenly the end of January and I don't know how I got here so quickly...so the only answer is that  there's a problem with my space-time continuum again and I'm stuck in a time warp that is distorting everything and making October actually just yesterday for me!!!

So, guilt gone and I've accepted I am now really in January - it must be true because I know it's been raining forever and I'm heartily sick of it. It's a wonder Britain doesn't sink with the weight of all that water on our sodden land!

I'm going to use my useful time warp and transport us back to the hazy, crazy but not so lazy days of last summer to show you the work on the bottom pond...at last! :-D
Ooops, I've just realised from looking at the dates on the photos that building the reservoir actually happened in April 2012, but we didn't get any further then because the awful weather set in for the rest of the summer and it was never dry enough for long enough to get the pond finished!

Right. Get yourselves a nice cup of tea, or whatever takes your fancy, and sit back and enjoy the ride!

Given that Himself is a reincarnated Victorian engineer, it wouldn't have been right if  we'd built a reservoir without him having to produce some wonderful contraption to help it along.
He made 2 cruciform wheels of spokes..... 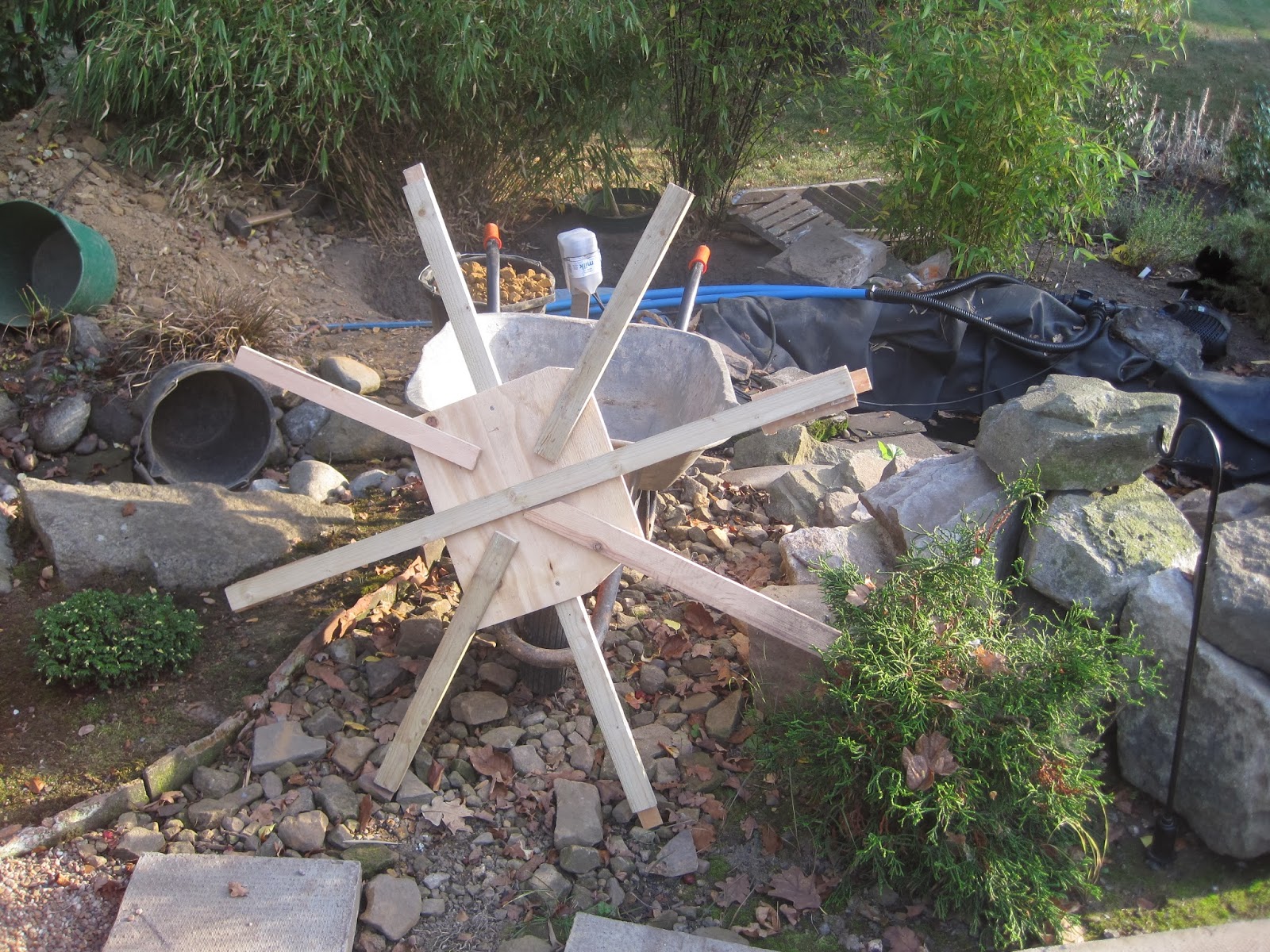 to go in place once he'd cleared out,shaped, sized,  levelled and put sand in the bottom of the long dug out reservoir pit. He then made a cylinder of 2 layers of hardboard - the inner one was shiny side out, the outer one was shiny side in and was 2" bigger in diameter - the reasons for this will become clear in a minute! 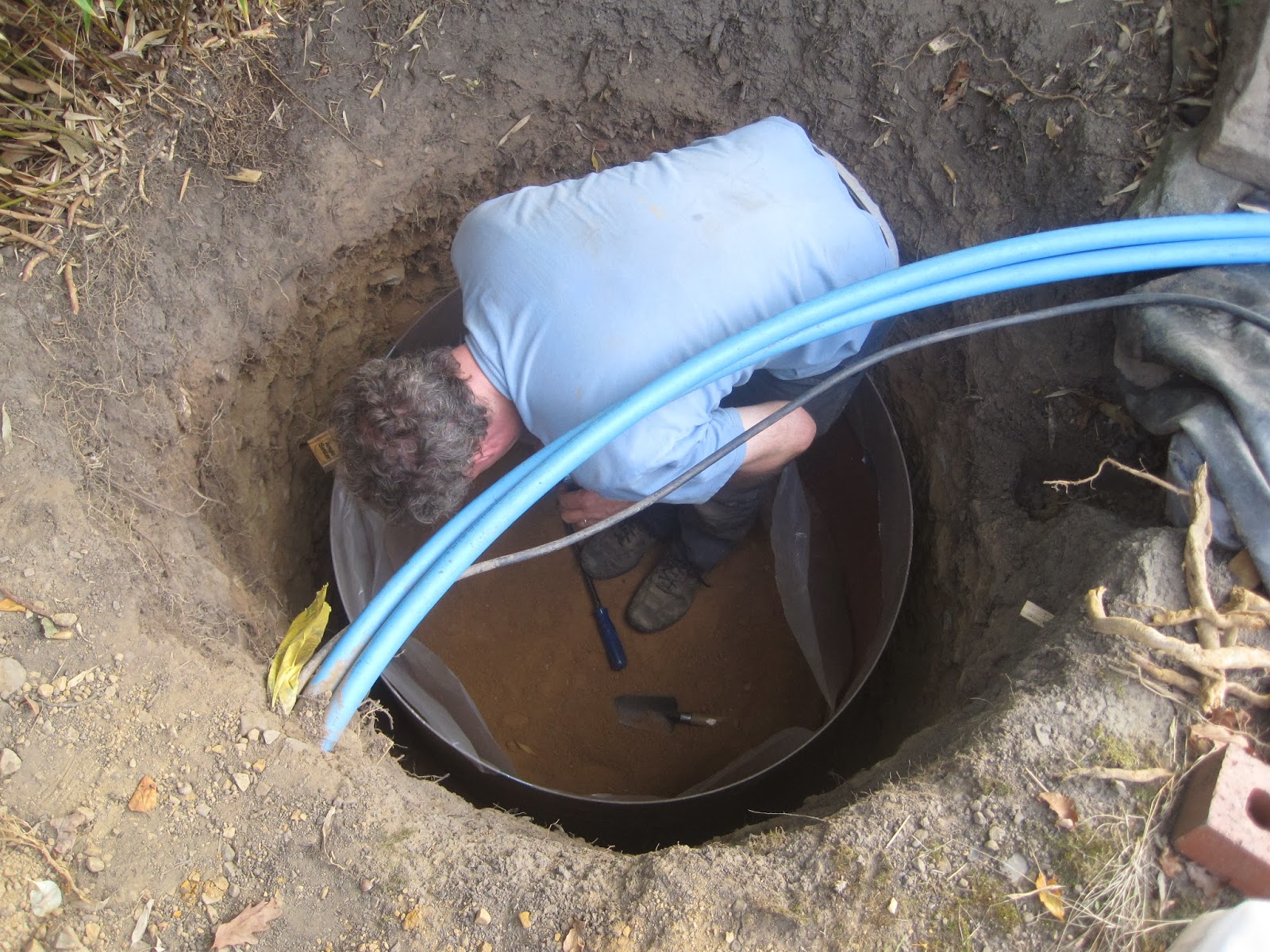 The two cruciforms wedged the inner cylinder in place and kept it circular. The outer cylinder, being bigger, left a 2" gap for concrete to be poured in and we used offcuts of tea house insulation  to wedge the out cylinder in place. I'm a really good mixer of concrete (she said, modestly!) 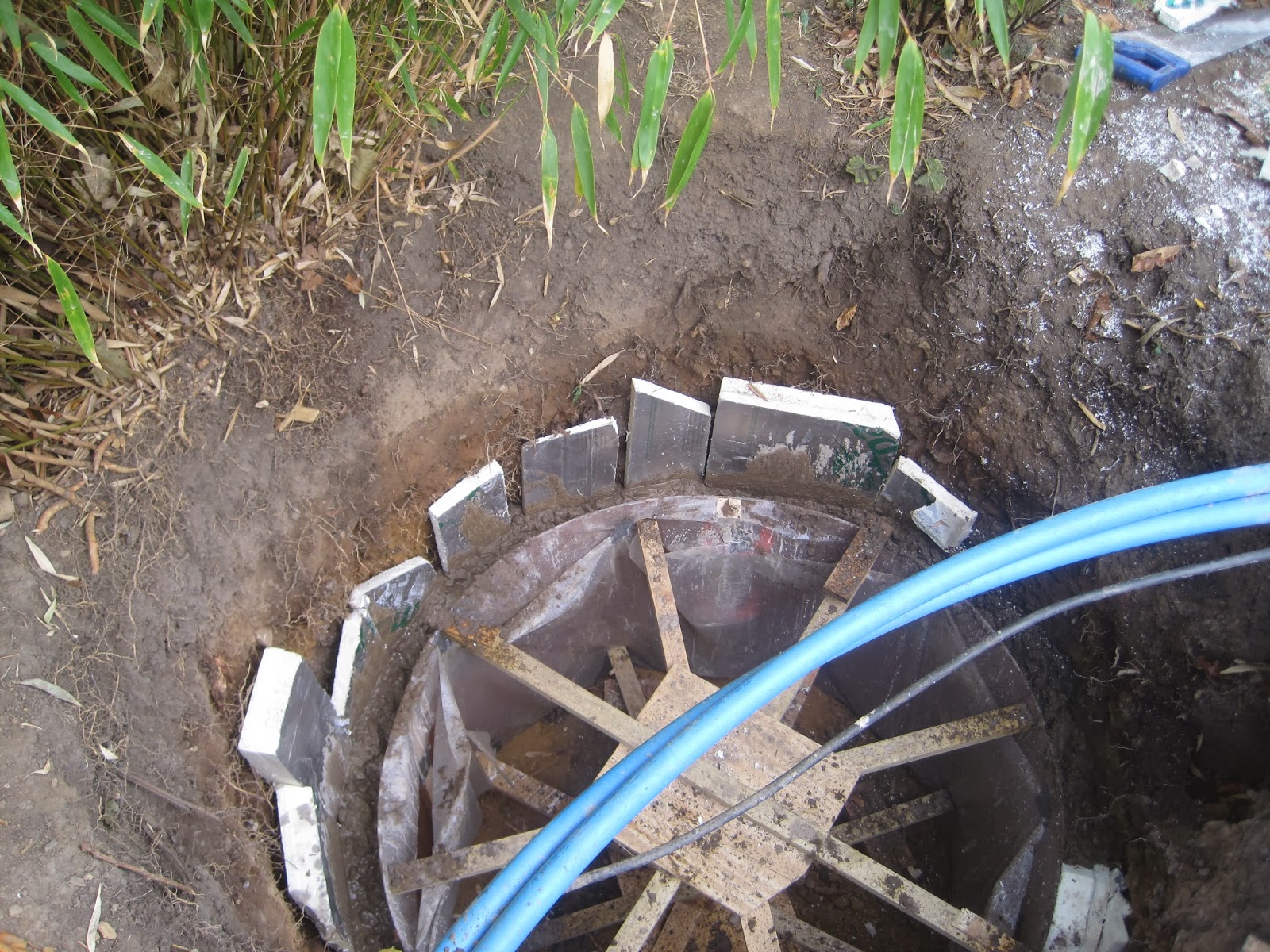 Once the concrete was set, we took it all apart, raised the cylinders and cruciforms up and repeated the process twice more - with a week between each move to let the concrete harden off. It was hard work and Himself proved to be a bit of a contortionist as he clambered inelegantly in and out of the hole with increasing amounts of stuff in it! 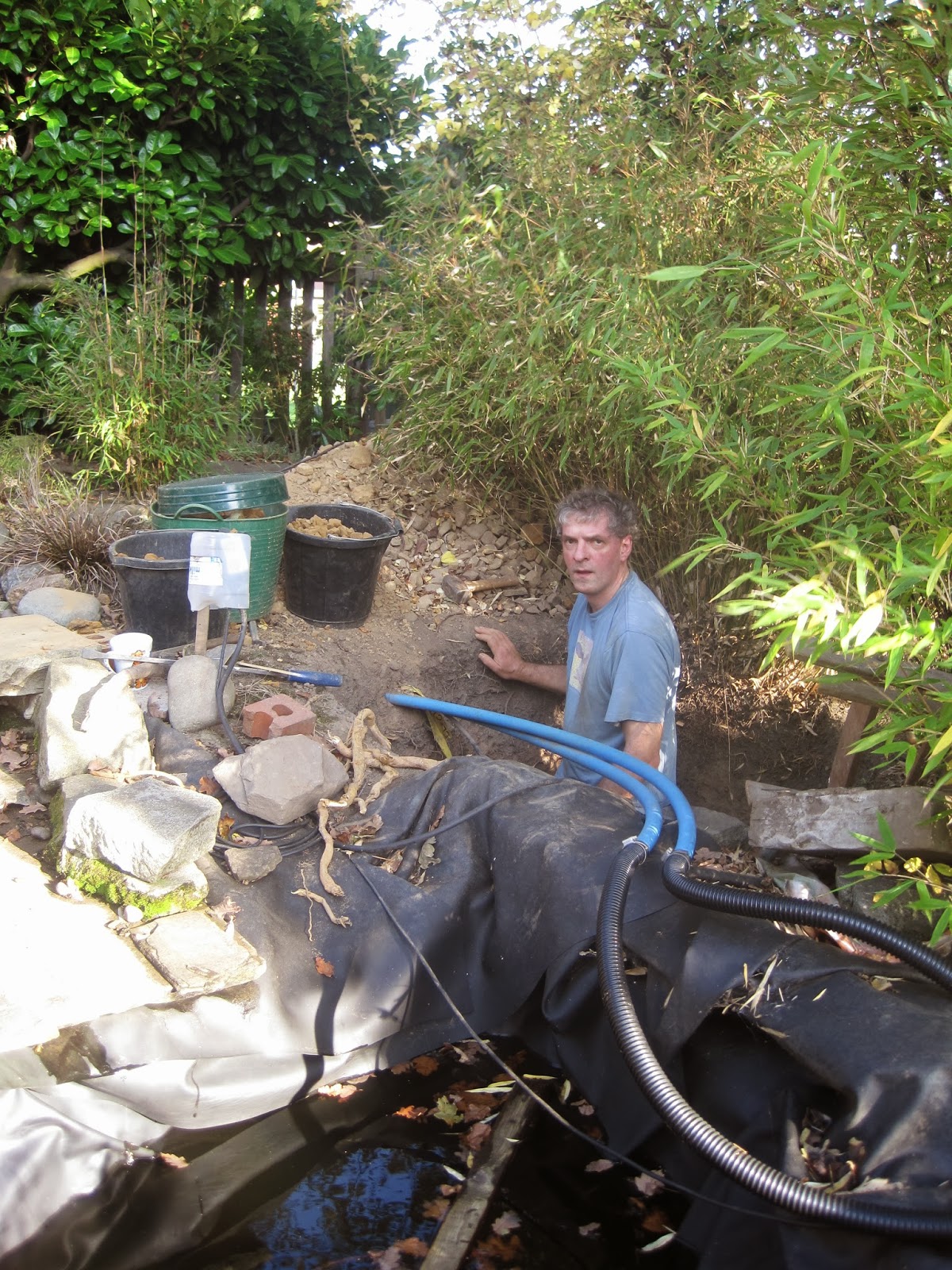 The result? A beautifully cast concrete reservoir! Himself is a star! 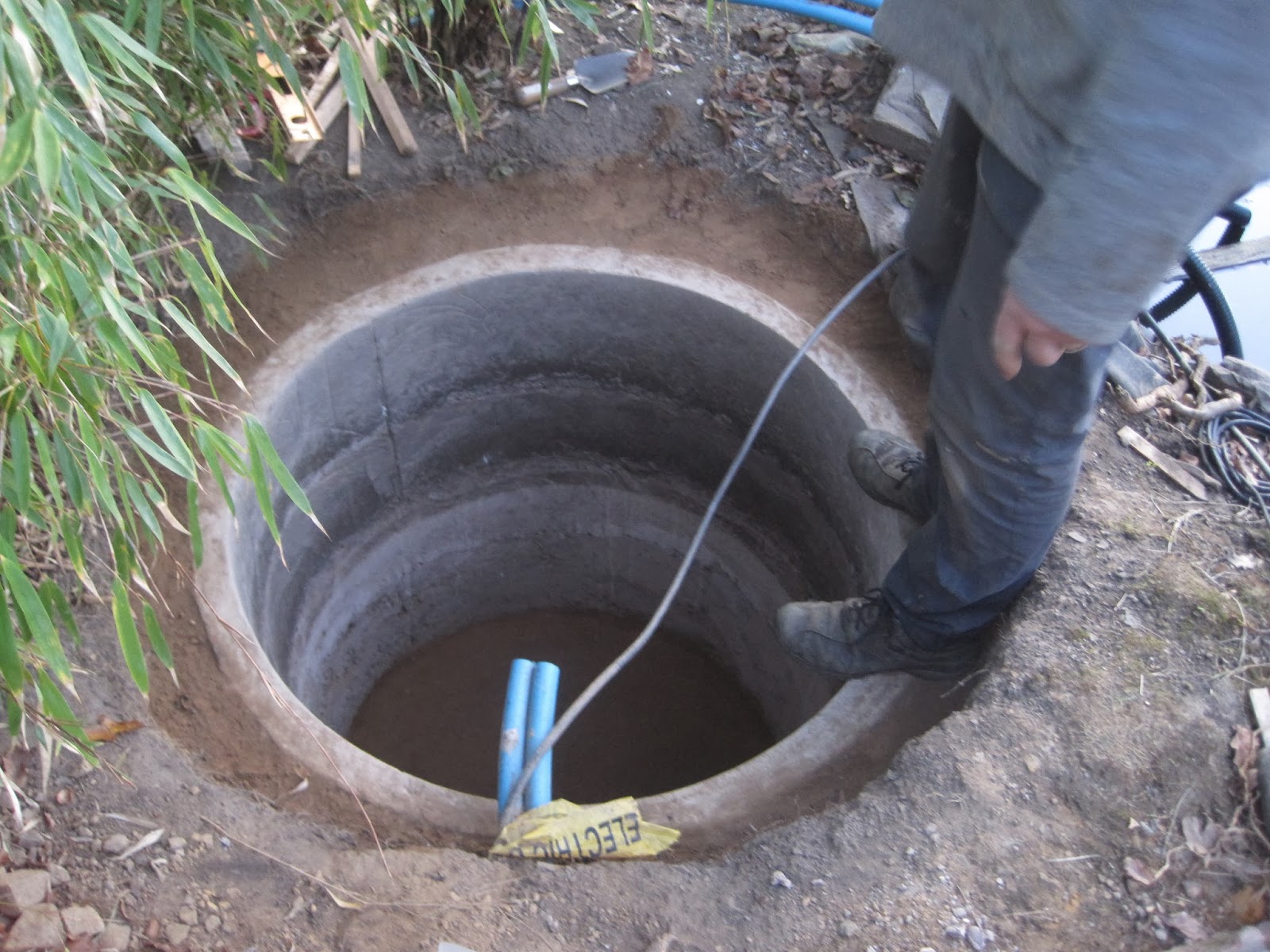 Now you're probably wondering why we needed a reservoir? Well even if you weren't wondering, I'm still going to tell you. The top pond is considerably larger than the bottom pond. It holds appoximately 6000 litres (or 1300 gallons if you prefer) and the bottom pond only holds about 2000 litres (500 gallons), so every time we switched on the pump to run the stream, the bottom pond water level went down about 2 feet - because the water level  in the top pond needed to rise by a couple of inches in order to get over the lip of the waterfall stone - but more about that later!

In the next photo, the green hosepipe shows the shape of the finished pond. It had only been, up to this point, a hole with a liner in it so that we could get the water levels right and check that the stream worked. It had never been properly dug out, shaped, shelved and 'done'. Part of the problem in getting it done was that I wanted the pond to extend across the skanky old path, part of which I'd already removed, hence the manky flagstones...... 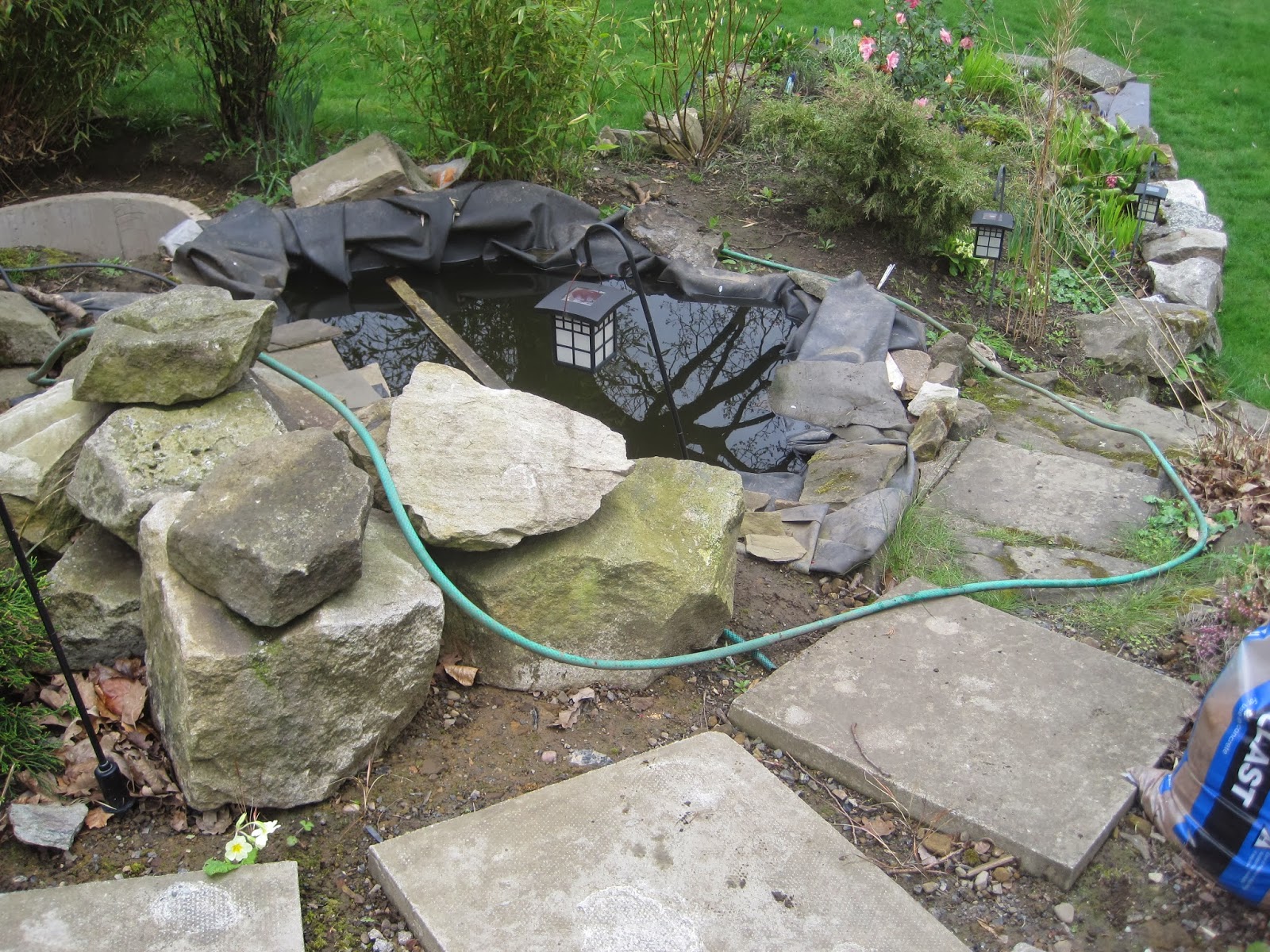 and it was at the top of some equally skanky old steps!!! Yeah, yeah, I know ...first I build ponds under treees, then I put them at the top of steps!
We pumped the water out of the pond hole to let us access the hole. 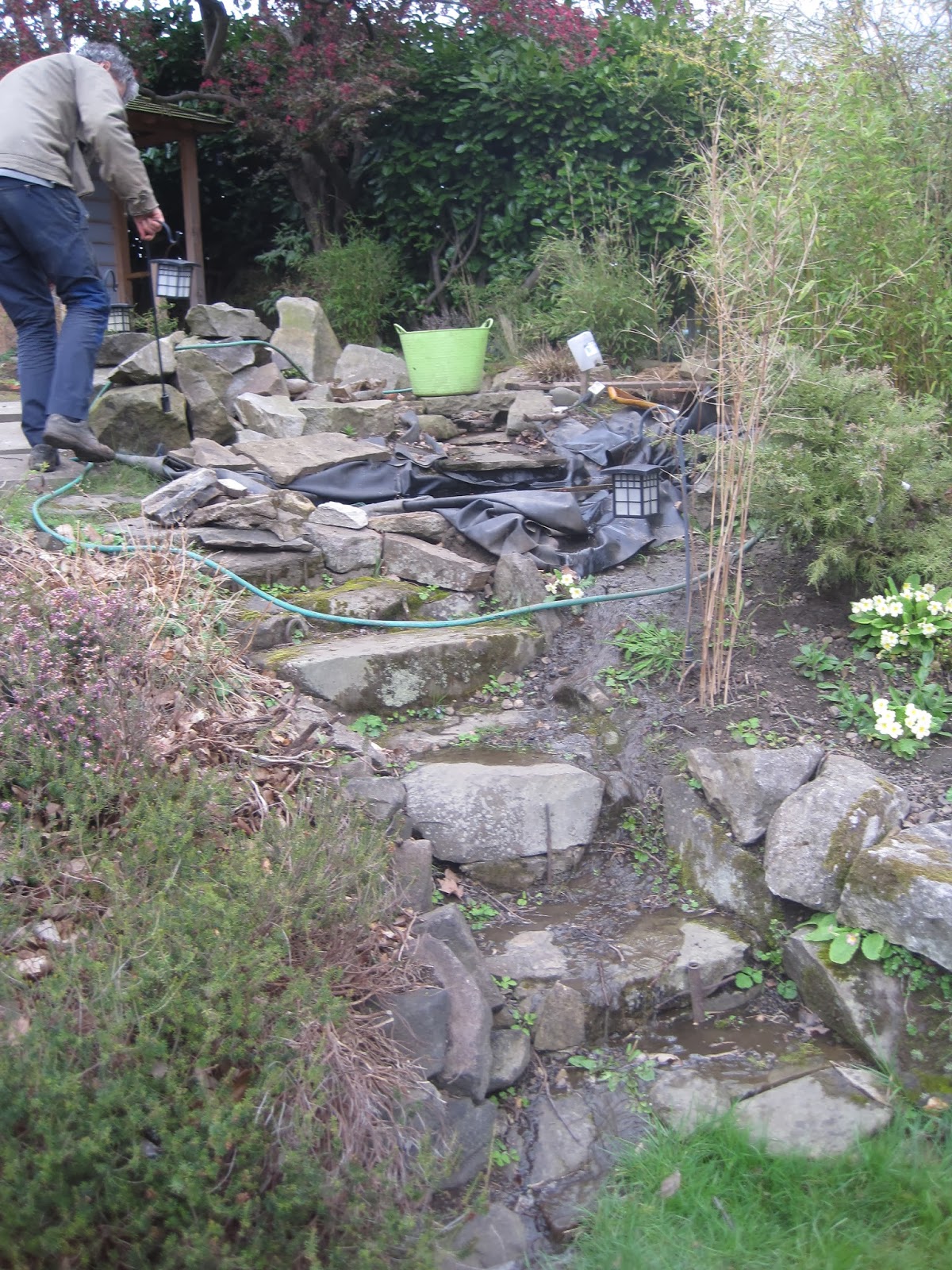 Anyway Himself , as ever, had a cunning plan to deal with my idiocy! He took out the old steps, used a few chunky pieces of pond stones to construct a dry stone wall to join up with the hideous old wall on the right (which at some point will be replaced with a nice wall!) and then he backfilled it with the topsoil we'd had lying in a heap from when we originally dug out the pond hole about 5 years ago! 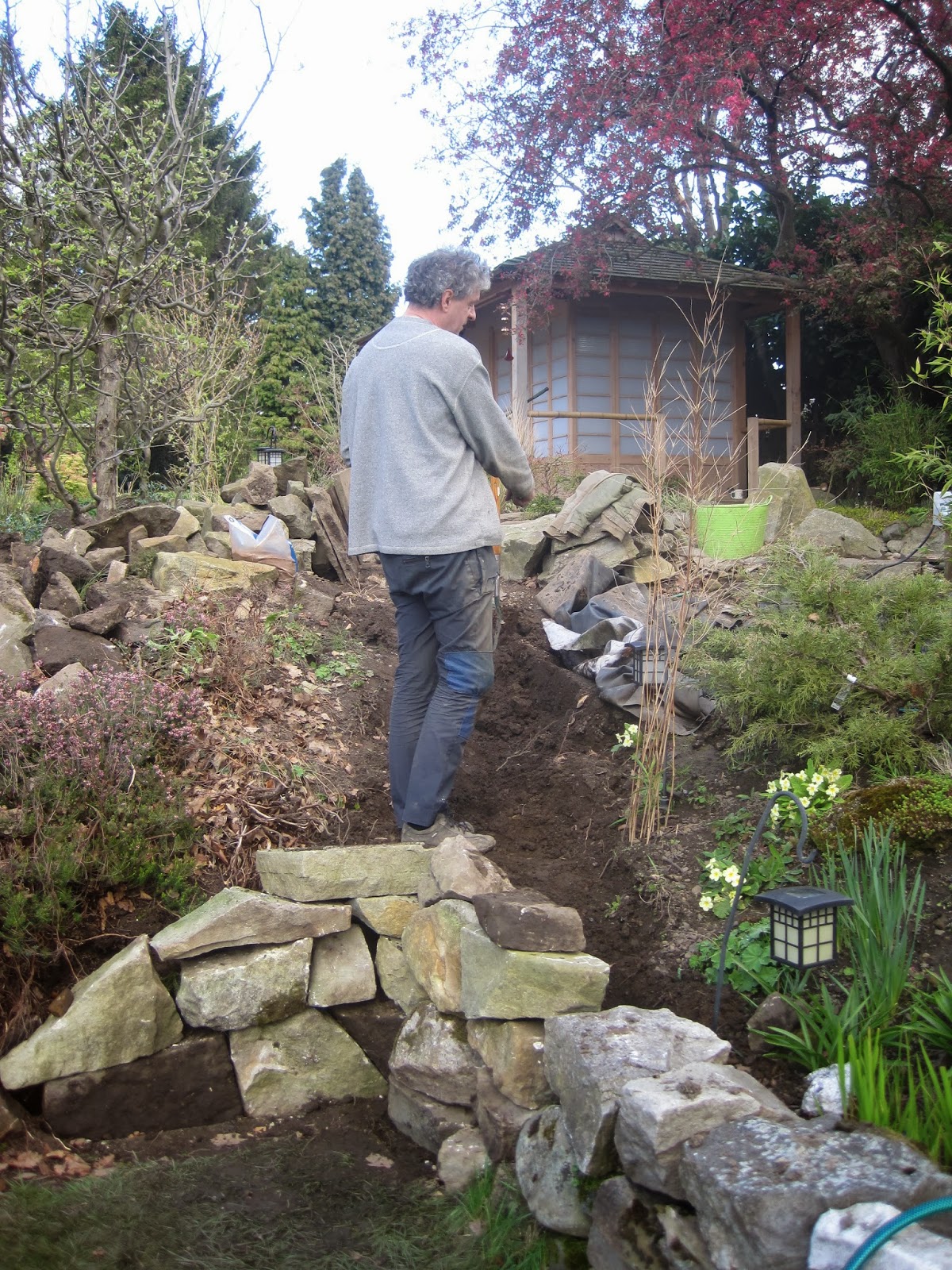 I then had the dubious pleasure of clearing several years worth of leaves, gunge, frogs, newts and assorted other squirmy things out of the  bottom of the hole. Balancing somewhat precariously on the edge of a hole where the bottom was juuuust deeper than I could safely reach did wonders for my core muscles - ouch! 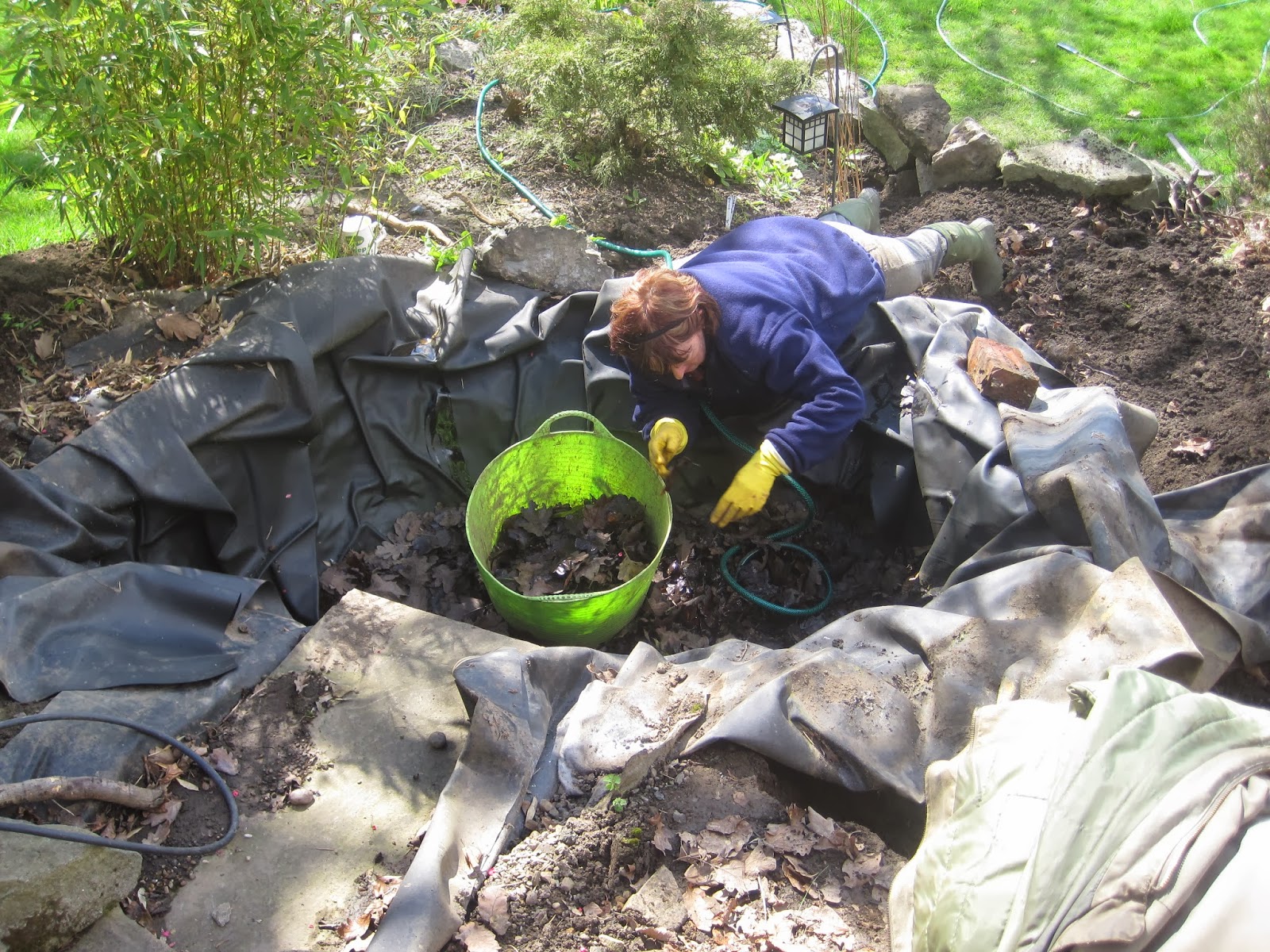 Then liner was then removed and Himself went all technical again. I pointed out where I wanted the shelves to be. He then carefully worked out all the levels and did the scary bit of drilling the hole through the concrete to put the outlet pipe in place. No use having a reservoir if you can't get water in or out of it! 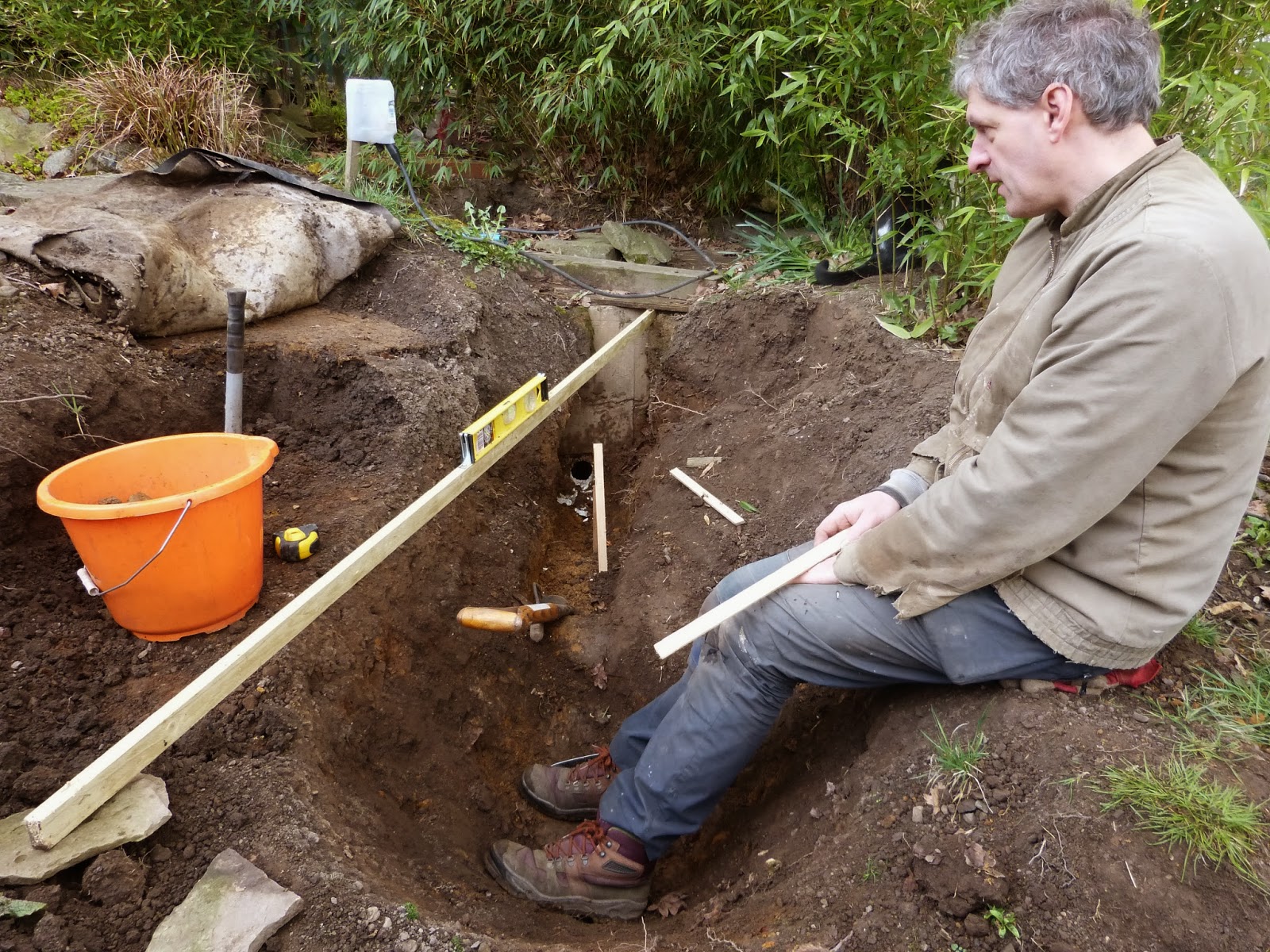 The outlet pipe was fitted - after a bit of a struggle in a confined space again, but at least there were no cruciforms in there this time! 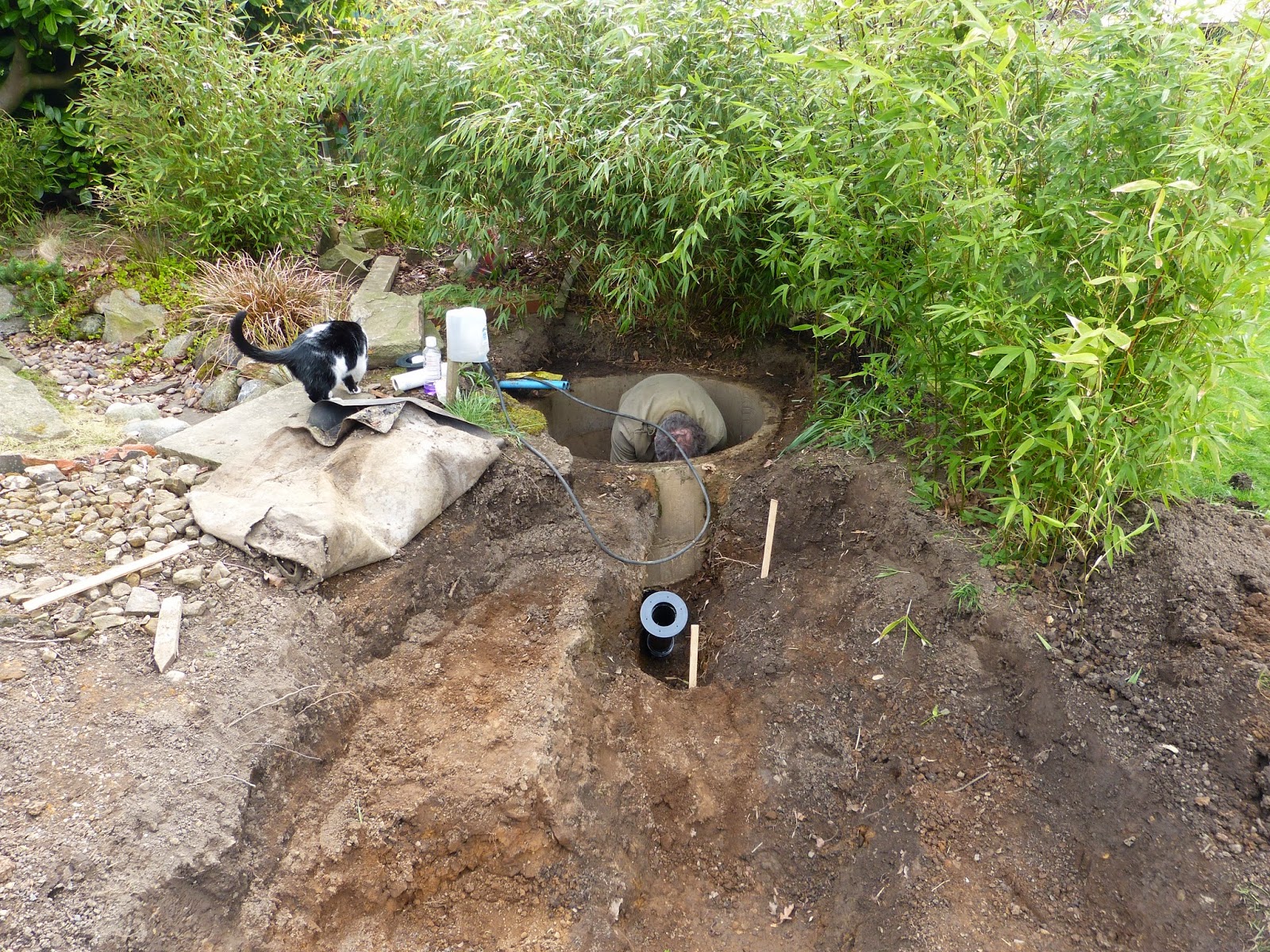 and backfilled with soil, then a layer of  builders sand on top. 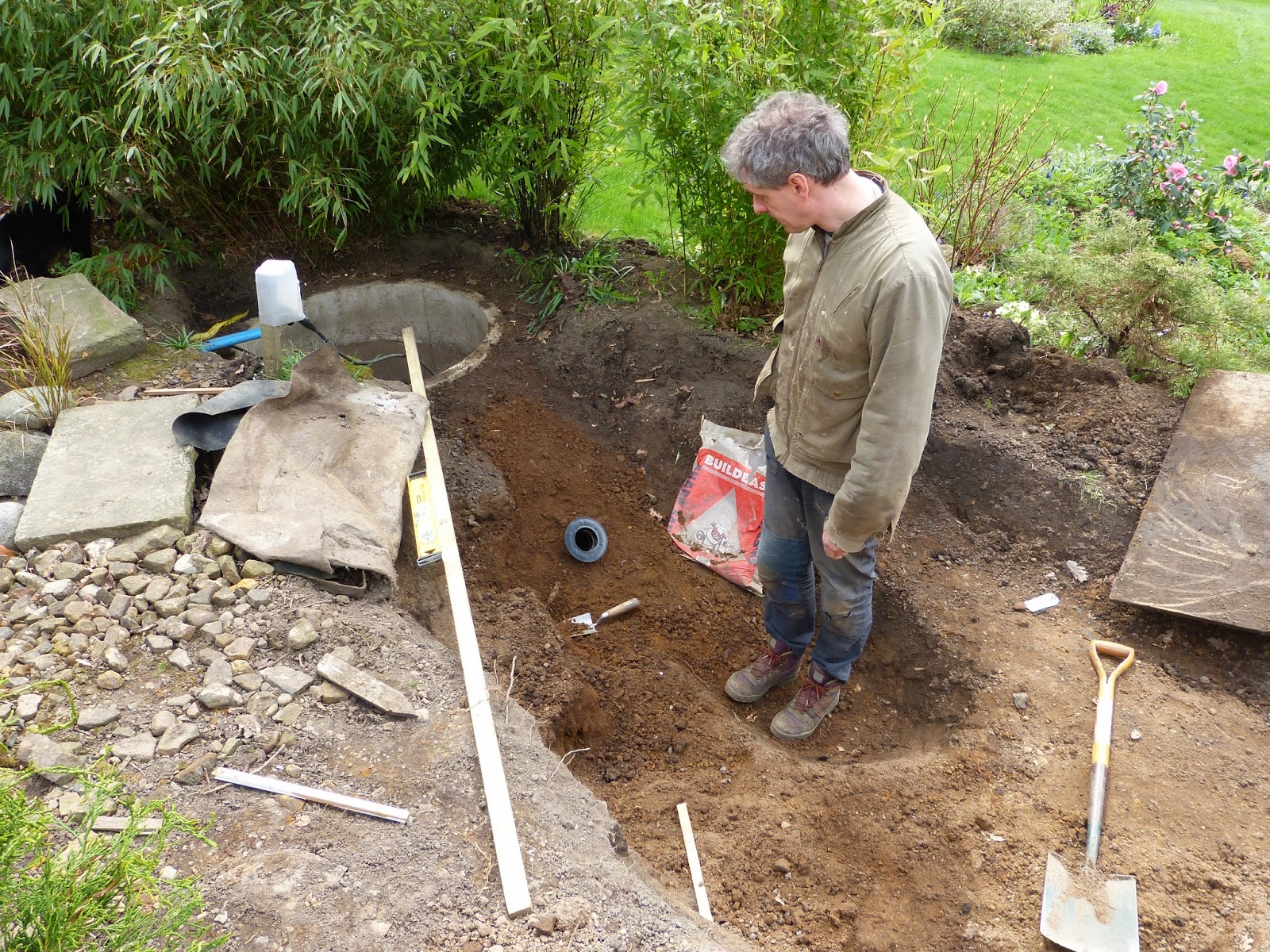 The tank was lined with fleecy pond underlay 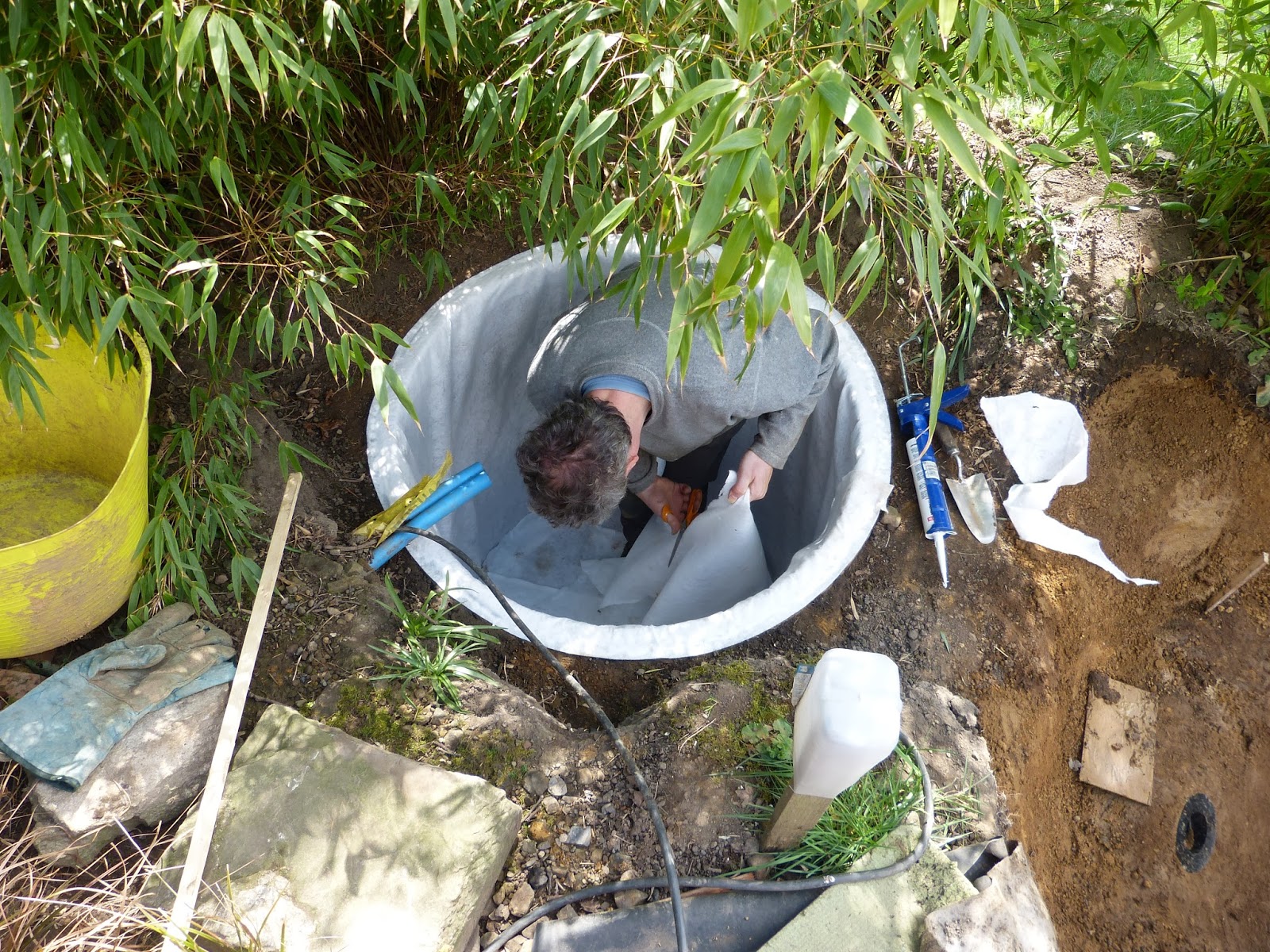 and then, with Ower Dave's help, a specially made 'top hat' shaped butyl liner was carefully put into place and glued down. 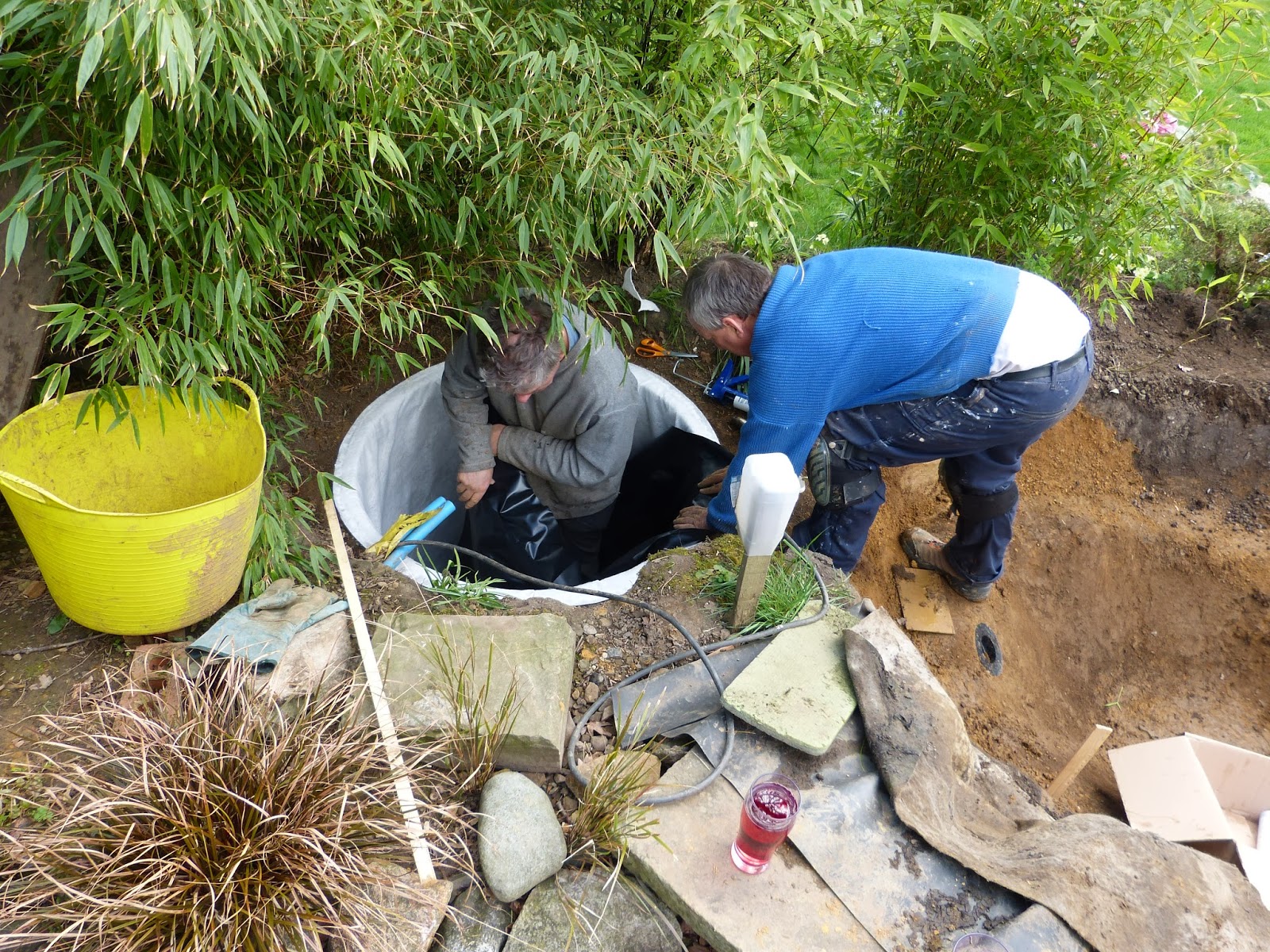 The rest of the pond was properly dug to size and levels. Ower Dave lined it all with fine sand - that I had spent hours making from the sandstone I'd dug out of the pond holes years ago and stashed up the garden on some tarpaulin. It just needed a bit of bashing and putting through a griddle. 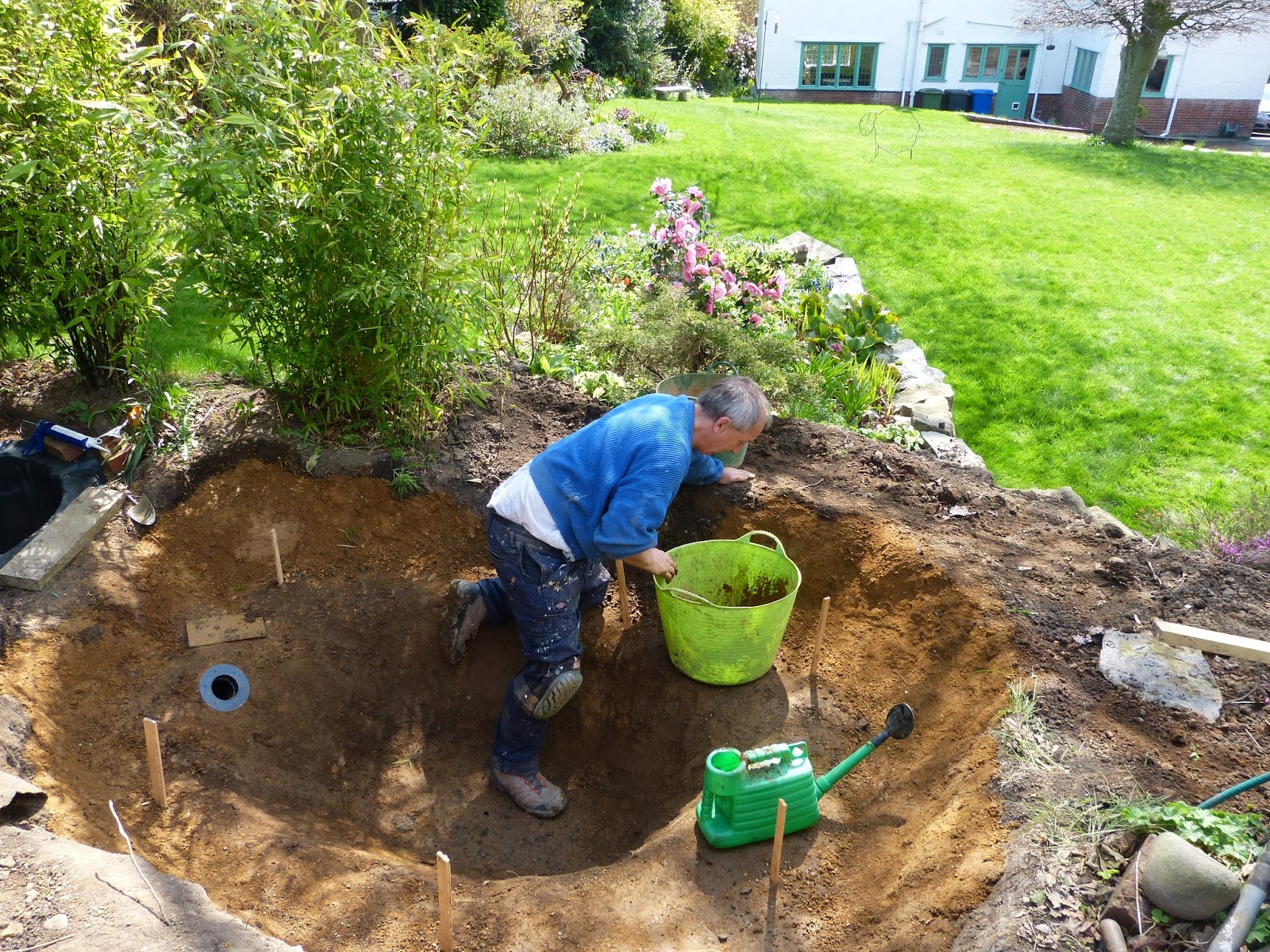 We filled the reservoir, checking carefully for any leaks - and, of course, there weren't any! 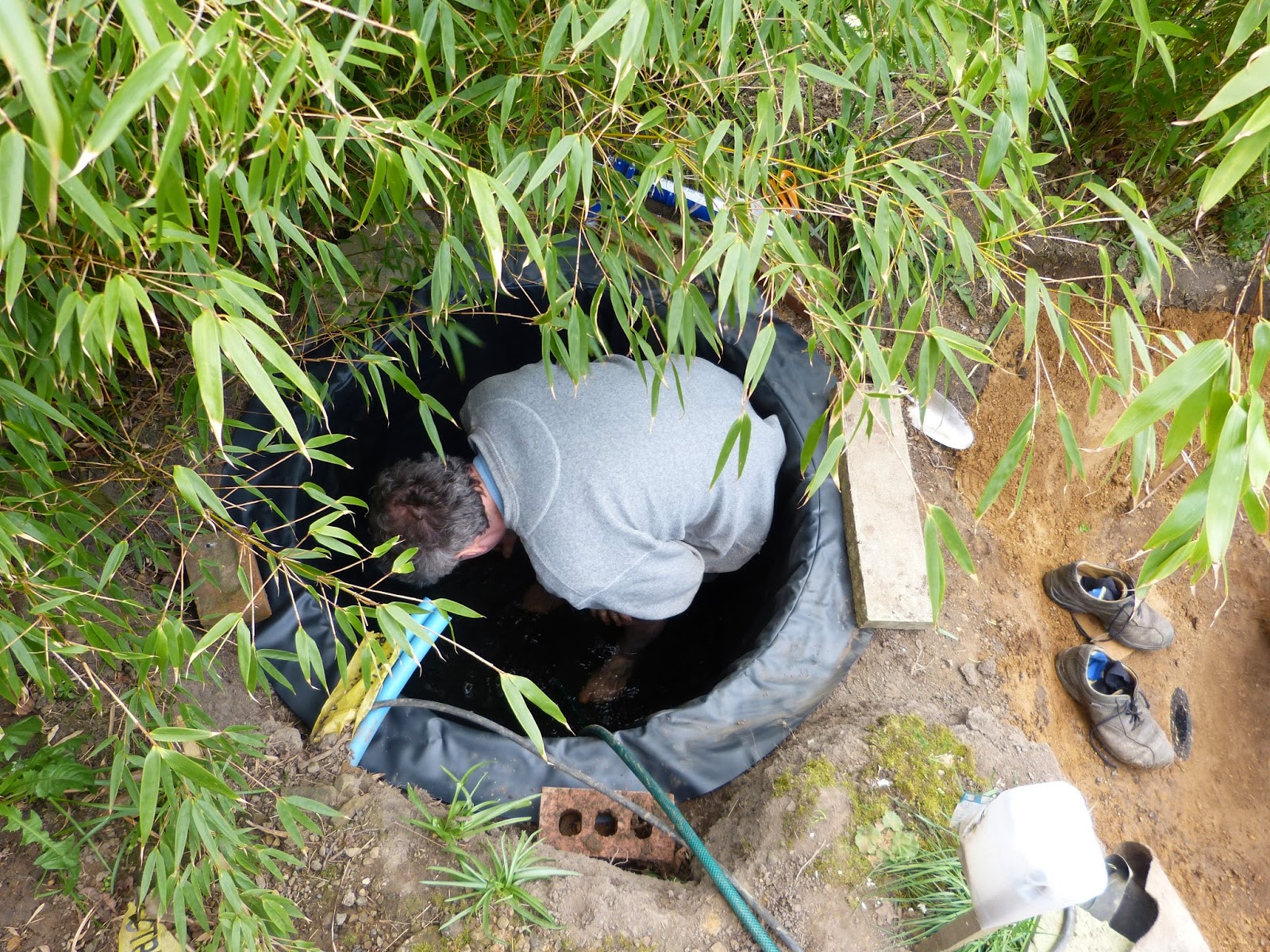 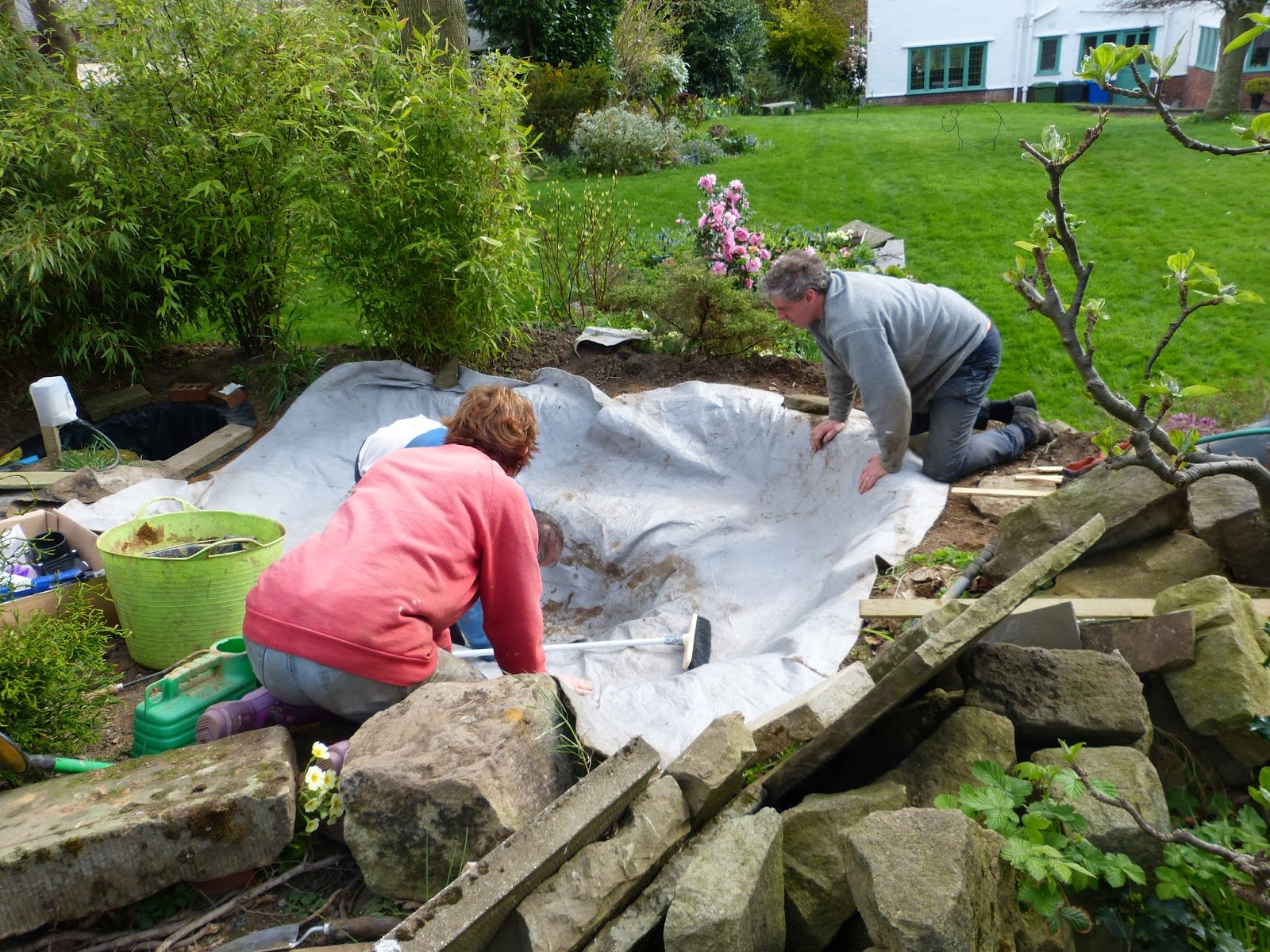 before the butyl liner was finally laid...after sitting in the shed for 2 years! 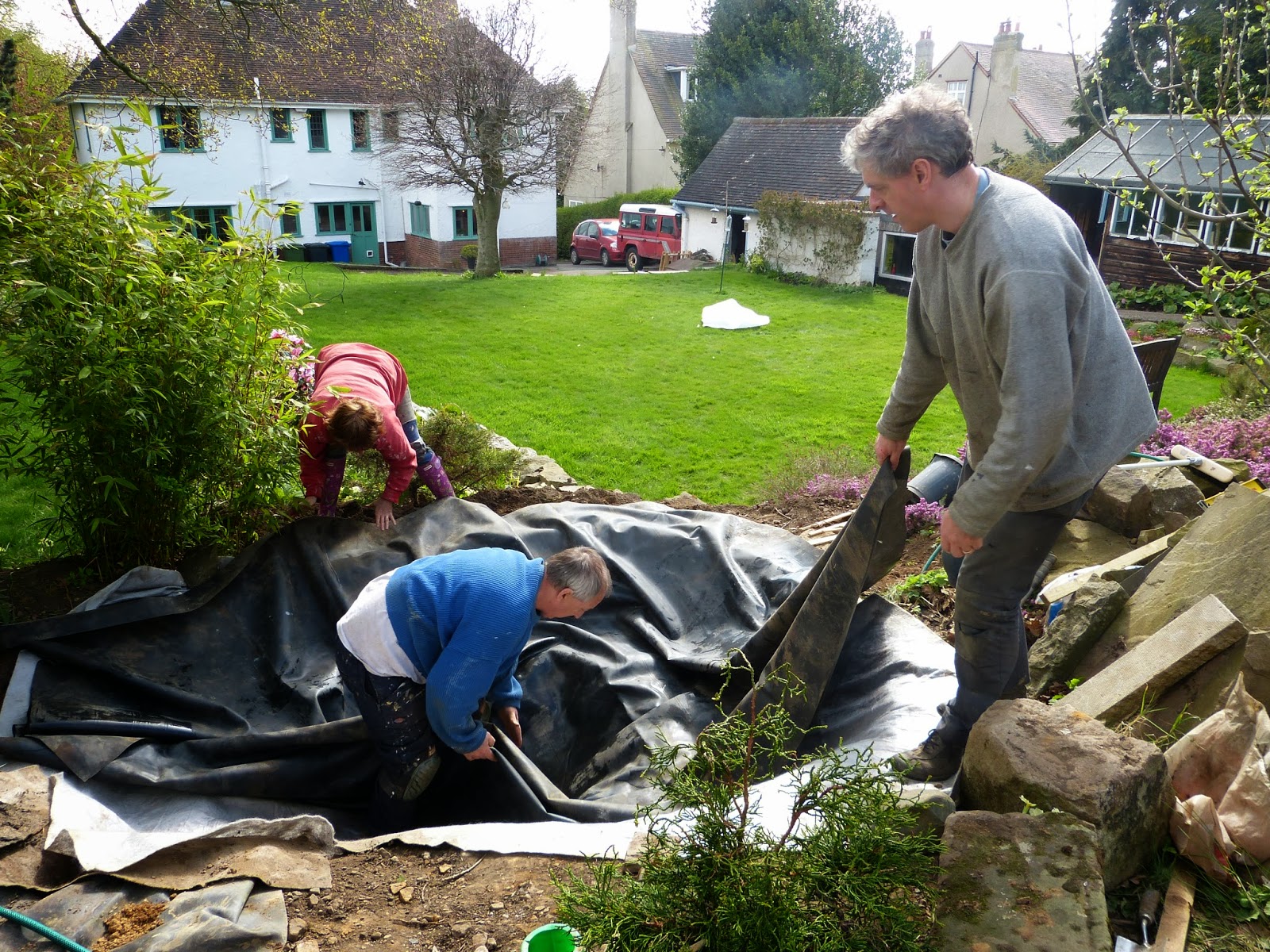 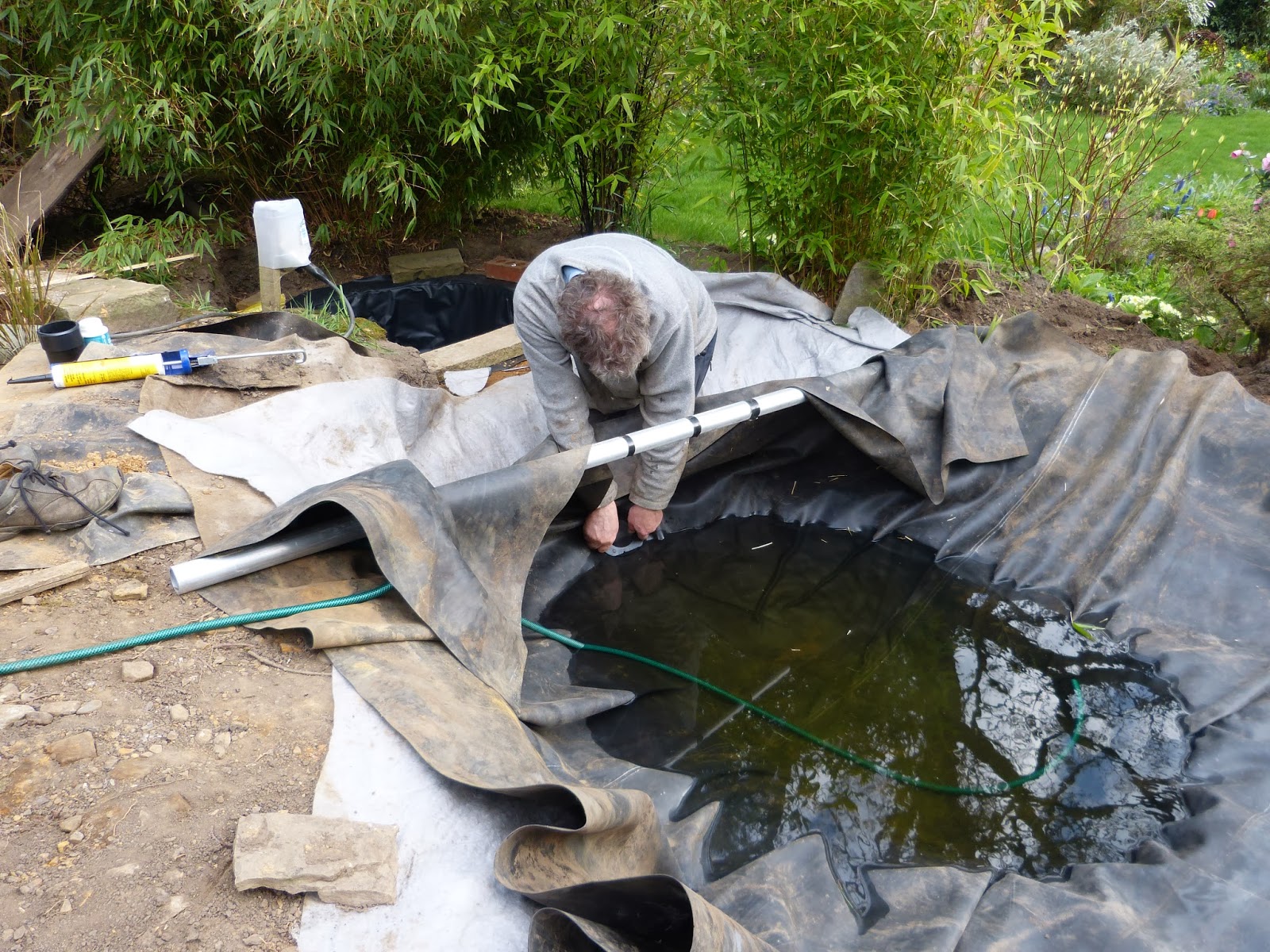 and we left it to fill up with water 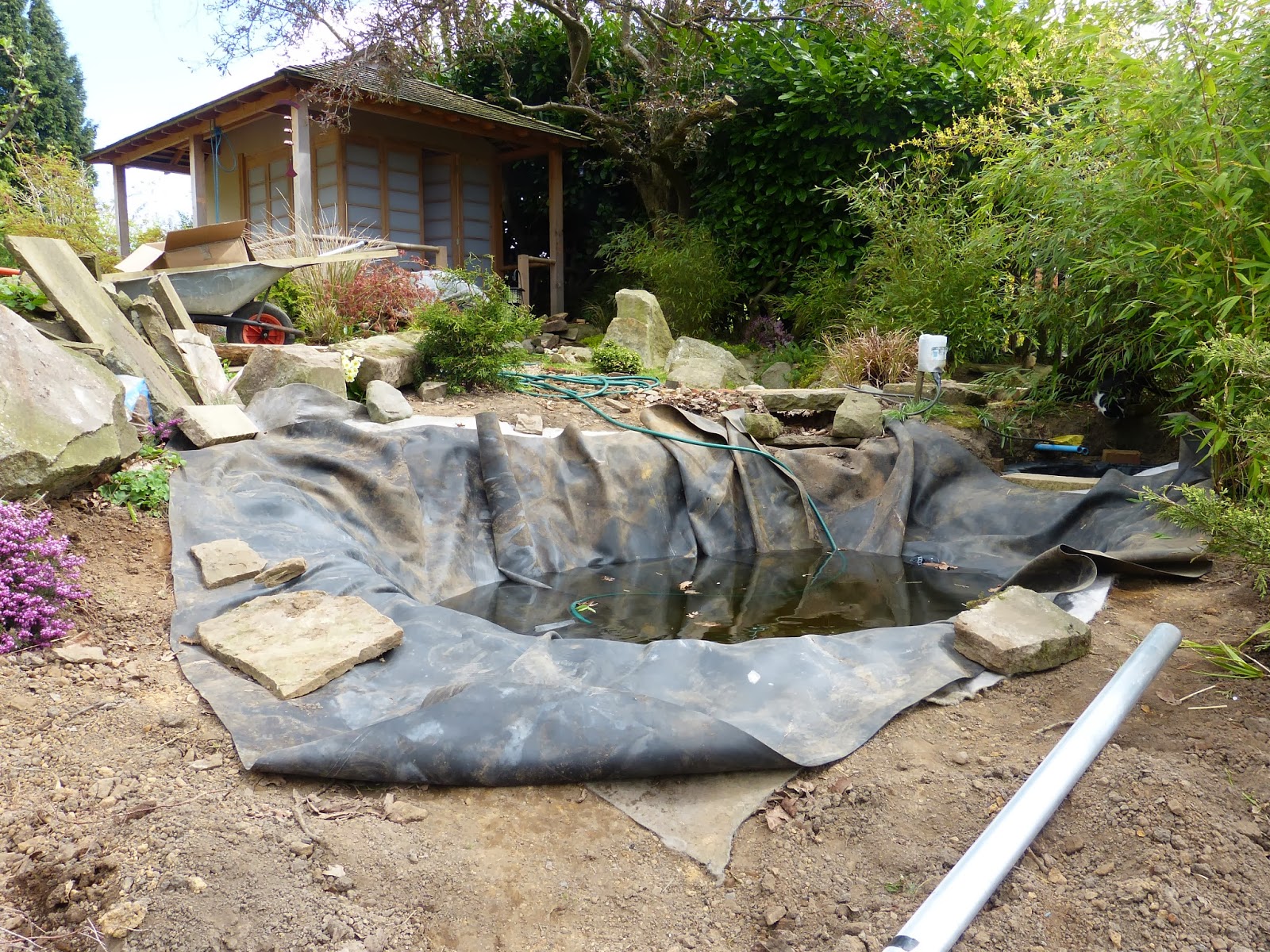 ...and it stayed that way for a whole year! 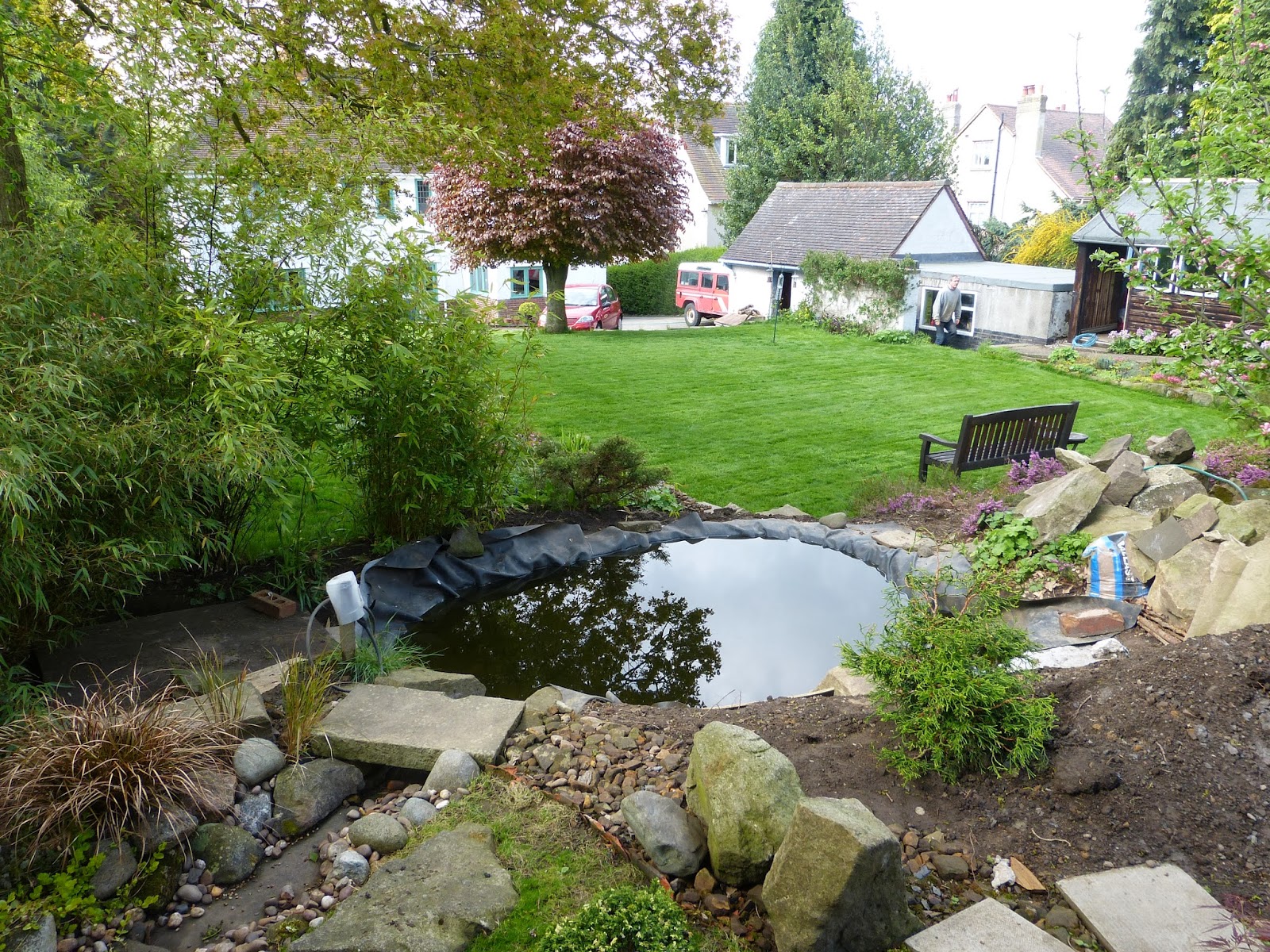