Parting Is Such Sweet Sorrow

Shakespeare was wrong, parting is most definitely not a sweet sorrow, parting is agony. It is curling up in a foetal position, holding yourself and rocking until the pain and silent screaming have passed, whilst knowing that the agony will strike again and again for the foreseeable future because it is outside of your control.

It's the seemingly endless tears we can produce at any time - the ones that stream down the face for what seem like hours and leave you snotty, red eyed and exhausted and the ones that just leak silently from the eyes unbidden at unexpected times. It's the howling like a banshee with your face pressed into an old coat, the sight of which had caused the flood in the first place.

It's that intensely sharp stab through the heart at a piece of music, a specific scent, the touch of a cashmere jumper, the memory of a frequently shared old family joke or seeing a beloved face in a photograph. It's the tossing and turning in bed at night, unable to get to sleep then finally doing so only to wake, exhausted, in the wee small hours to start tossing and turning all over again.

It is the intense weight of lethargy - that sheer inability to make a decision or even to do anything some days, the total lack of enthusiasm for things that you normally love, the sudden inability to concentrate on anything except iPad jigsaw games for more than a couple of minutes at a time. It's the favourite book that has suddenly been translated into Russian and no longer makes any sense no matter how many times you read the same paragraph.

It is the burning desire and the need to become a hermit from the social world to be alone with your pain without having to deal with other people. It is the immense heaviness of grief. But strangest of all, it is the mind that wanders off to a different place at will - a place of bland nothingness, but where it was safe, where you weren't bereft, rudderless and adrift in the sea of life, alone as an orphan.

You may have realised by now that, at the age of 55, I have become an orphan. The death of a parent is always devastating and I don't think it matters at what age it happens, but the death of your second parent is even more so because of that complete loss of the guiding lights of your life and the only people who can and will ever give you total complete and utterly unconditional love.

My wonderful Dad died on February the 26th after a brief illness - the first in his 83 years of life. Ower Dave and I are left bereft. We had such a strong, loving, open, honest and laughter-filled relationship with Dad, as you can see from the photo below. 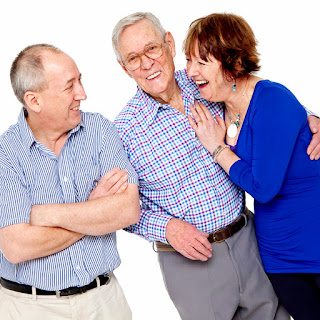 I wanted to say so much about Dad, but as Ower Dave gave a fantastic and very moving eulogy at Dad's crowded funeral, and as I share so many of the same strong memories, I figured I couldn't write anything better than that so I've pinched a few bits from it instead. It's over to Ower Dave now, but any bits in brackets are my comments and thoughts:


Dad was a big family man and most of my earliest memories are around the things we did as a family:
As we grew up, home and the family continued to be important to Dad. We lived as a family in three houses over the years but whichever house we were in, he and Mum always made it a welcoming place for other people. 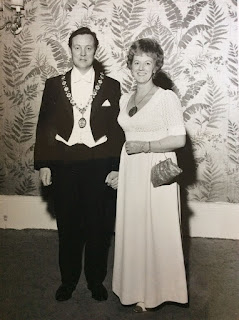 As the family grew up and we found ourselves with our partners, Dad and Mum embraced them all fully as part of the family and of course loved and treasured their 4 granddaughters when they came along.
Part of that was Dad's sheer capacity to love, his underlying kindness, personal resilience, courage and fortitude. He was devastated when Angie (our sister) had an accident that left her paralysed. And I'm certain he thought he was going to die of a broken heart during the first few months after mum died in 1991. But he found a way of working through these and Angie's subsequent death in 1996, and continued to find great joy and pleasure in the family. He loved it when all the family was together. (Like the time 2 years ago that we had a professional photography session for the family - he was at the centre of the family then, as he always was. This was the photo we chose to go on the front of the Order Of Service at his funeral as it seemed so right to surround him with our love one last time) 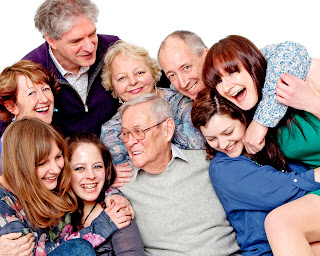 The last area of Dad's life I'd like to touch on was the overall way he was able to connect with people. When Mum was alive she was so vibrant that I thought she was the main connector, but I've come to recognise that Dad and she were at least equally matched.
Both before and since he died, so very many people have told me (us) what a genuinely good and nice man he was and how fond they were of him and I think that was one of his true gifts. Sometimes it's just the little things. People remember him as being kind, thoughtful and caring - a true gentleman, but they also remember him being smartly dressed with a jacket and tie or his trademark cashmere jumpers.
Wherever Dad formed his connections and friendships, he held them all dear, and this completed the circle for him of family, work, faith and friendship. The one thing that was common throughout all this seems to have been that there was always laughter wherever Dad was. Liz often tells the story that the people where she worked always knew when she was talking on the phone to Dad because she laughed so much and I remember Angie saying much the same thing.
Even amongst the sadness we laughed with James from Bartholomew's when we were arranging the funeral. We laughed with Sasha at the florists when we were the flowers. We laughed with Father Desmond when arranging the funeral service and we've laughed amongst ourselves as we've remembered what Dad meant to us and the things we did together.
Dad would have been fine with that. I came across a piece of paper when I was checking his papers for his thoughts on today which said, in his words, that it was alright to take the mickey out of him at his funeral.
One of the things that Dad often said in good humour to us, usually after he'd been teasing, messing around or just generally being daft, was "you'll miss me when I've gone".
He was right. We do and we will, but these then are some of the ways I'm going to remember him: 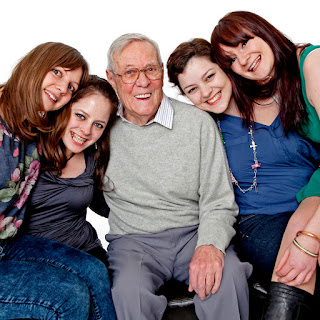 Back to me now for the final word.
I feel so fortunate to have had such amazing parents. We were financially poor﻿ when I was little, but we 3 children were never aware of it because we were love rich and protected from such adult worries. Dad and Mum both set us firm and consistent boundaries with known consequences if we didn't follow them - and they never failed to carry out those consequences either, but they also praised and rewarded us for the positive things we did and for our achievements - even though Dad was smarting a little when, at age 12, I finally beat him in a swimming race! (Competitive? Us? Dead right!)
The best thing they gave us throughout our lives though was the knowledge that we were loved. "I love you" was a commonly used phrase by everyone in our family.....although from Mum and Dad, it was sometimes (okay, often) followed by "....but I don't like your behaviour right now!", but it was never used in a trite or offhand manner. It was always heartfelt and meant.
Dave and I had the painful and heart-wrenching privilege of being with both Mum and Dad when they died, 24 years apart. But we also had the immense privilege of hearing the last words from both of them to each of us be "I love you".
I love you too Dad.