Good things can happen too!

As many of you already know, some cowardly slimeball set fire to our brick potting shed on Christmas night whilst we were away. (If you're not already bored with the subject, you can read about it here).

As a result of their actions we lost all our vast collection of plant pots, propagators, seed trays, seeds, tools and numerous other gardening goodies that I'm still trying to identify from the blackened, mangled heaps.

Anyway, IG from 'The Idiot Gardener' having read my tale of woe, very kindly sent me a goodie box to begin my seed replacement and to cheer me up ....it worked!

Look what he sent me :D 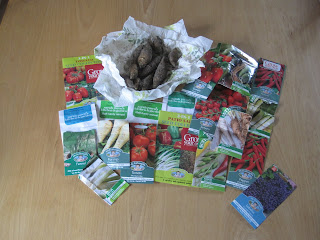 If you haven't read his blog before, go over and have a read. He claims to be a beer swilling idot, but I think that's just a front because he's actually a very articulate writer who appeals to my sense of humour, often wanders off at an apparently random tangent then makes me laugh out loud. He's also just a little bit rude at times , but that usually makes me laugh too!
The world's biggest tomato seed collection?! 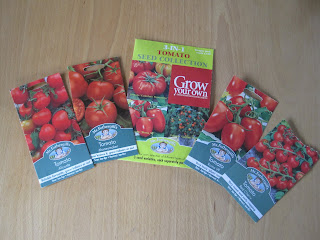 I have NO idea why Blogger insists on turning this photo on its side! I've had numerous attempts to get it the right way up, but to no avail - so you're stuck with it!
But just in case you can't read sideways, these are things I've never grown before -
fennel, hot cayenne peppers, munchkin pumpkins and salsify..... 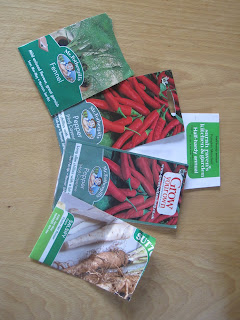 I can't wait to get them started, so I'm off to blag some spare pots off my local gardening friends .....but before I go, I just want to say Thank You IG from the bottom of my compost bin. You have restored my faith in my fellow men!
Posted by Nutty Gnome at 17:06 27 comments:

Whilst we were down on the Isle of Wight for Christmas with Ower Dave and his family we all went a bit traditional. One of my nieces, Megan, was in a Mummers Play on Boxing Day so the remaining 8 of us drove half way across the island to Arreton Barns to watch -yes, I know it's not that far to anywhere on the Isle of Wight but have you tried organising us lot?!
Anyway, Mummers Plays are Christmas folk plays that have survived since the early 18th century - although the term 'mummers' has been in use since medieval times. The word 'mummer' is variously believed to derive from Middle English 'mum' (silent) or Greek 'mommo' (mask) or Early New High German 'mummer' (disguised person), but wherever the word originates from, Mummers Plays still happen all over the British Isles in fairly similar forms and all seem to revolve around a quack doctor with a magic potion that can restore life.
Typically the plays take place in a pub! 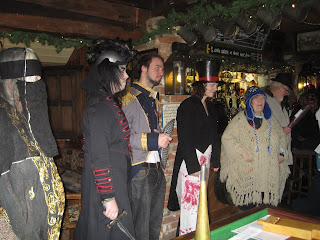 As well as the Doctor, each play contains a Hero - King George *hurrah*, a Villain - the Turkish Knight *booo*, Old Father Christmas, Mother Christmas, a Noble Captain and various others who I can't remember despite having seen the same play about 5 times now! The plays are broadly comic (this one was hilarious and included King George having his script taped to the inside of his shield!) and apparently represent the battle between good and evil. The onlookers are expected to cheer, boo and hiss as appropriate, whilst the actors have licence to forget lines, ad-lib at will and thoroughly enjoy themselves! Best ad-lib this time? ......."stay there, you're still dead"!
Each character introduces him or herself in rhyming couplets and battle swiftly commences, resulting in the seriously overacted 'death' of one or the other character, thus allowing the good Doctor to rush to the rescue with her magic bottle of potion to restore the victim back to life *Hurraaah!* The play finishes with a song from the whole cast before a hat is passed round to raise money for charity. Excellent fun!
(that's my niece as the Doctor) 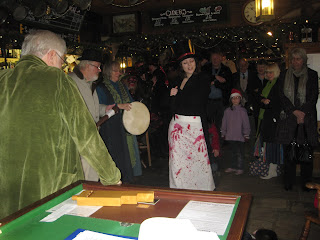 After the excitment of the Mummers Play we went out into the cold to see some Morris dancing - once the, erm, 'band' set up! 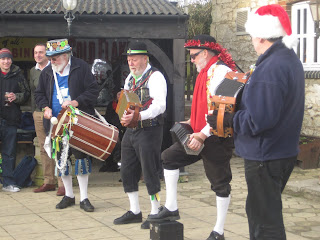 First came the ladies - a bit twee and insipid for my liking I'm afraid... all boughs, bells and garlands. I'm sure it's very clever, just wasn't for me! 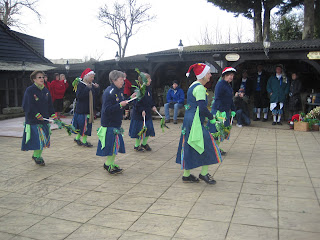 Then the clog dancers, who were quite impressive in their speed, the loudness of the clogging on the boards 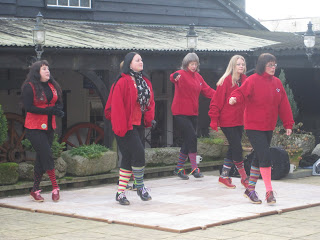 and the complexity of their steps. I'd always thought clog dancing was a Northern thing, so I was quite surprised to see them 'down south' - they were good though, for southern jessies! 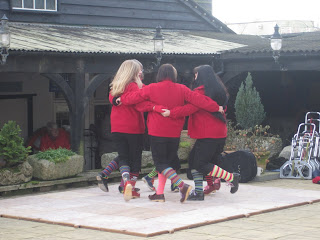 Then the bands changed and Santa came to play his violin - a man of many talents is Santa! 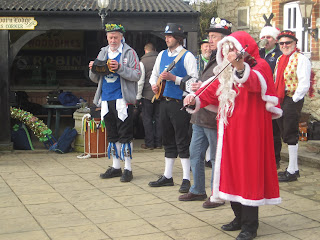 as the first Morris Men came out - a bit more roughty-toughty than the ladies, but still with tinkley bells on their legs! They managed to remain looking quite serious as they danced, despite looking a bit daft! 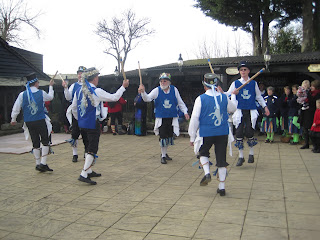 The next set of Morris dancers were a young mixed male/female group. They have eschewed traditional Morris dress for anything as long as it's red or black - resulting in a slightly piratical look. Their music remains traditional, but was played slightly faster. The woman in the left of the photo called the moves for the dancers, who appeared to be having much more fun than the previous ones! 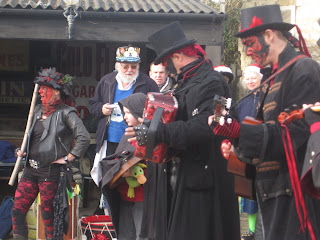 They also put much more 'ooomph' into the wacking together of the sticks.......(good use of technical terms there Nutty!) 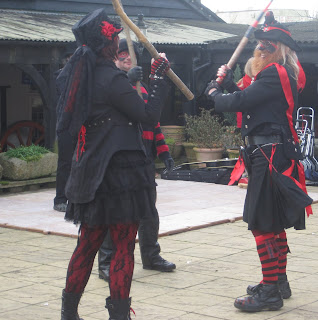 ...much more vigour into their faster dancing and lots of shouting and grunting as they whipped around each other - but then they were all a good 20 years younger than the other Morris men! 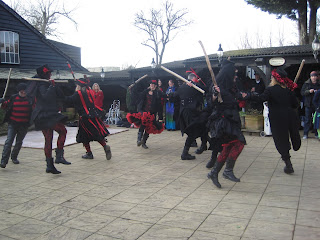 Having lost all feeling in our fingers and toes by that point, we denied ourselves the pleasure of seeing the other Morris groups perform and we headed home - although some of us would have prefered to go back into the pub for a pint by the roaring log fire first.....or maybe that was just me!
Keeping the traditional theme going, the following day 14 of us aged from 4 to 79 went to the pantomime, along with about 300 others - "oh no you didn't!" ...."oh yes we did"!!
Shanklin Theatre was doing a production of Aladdin. It had all the prerequisits of a panto - a man in the female lead role with a totally over the top set of costumes, a villain who was thoroughly enjoying his role, a sweet Princess, a handsome Prince/Aladdin (unusually, this was a actually a young man.It's usually a young woman)lots of 'bad' jokes, old jokes, wobbly scenery, cute little children dancing, cast ad-libs that reduced other cast members to quivering laughter jellies, forgotten lines, lots of audience participation with booing, shouting...."he's behind you", "he's nicked the lamp" etc, plenty of communal lobbing of dry sponges onto the stage to get the baddie, a cast-led singing competition between the two sides of the audience (- we won!) and, of course, the Happy Ending! I love a good panto! :D
It was all great fun and a great way to end our family Christmas holiday!
Posted by Nutty Gnome at 15:34 23 comments: