Spring is sprung ...if only the sky were blue!

As I sit at my desk with the day drawing towards evening, I can still smell the fragrance of the wisteria drifting gently in on the breeze through the open window .......... glorious! So I though I'd divert into a little Spring-like post about blossom and flowers before continuing with the saga of the stream!


The wisteria hasn't got enough flowers on it to look good in a photo as yet, so I've had a general wander round the garden to see what was happening instead.

The first photo was taken a couple of weeks ago and looks up the back garden. The Japanese Garden is to the right of the picture between the steps and the fruit cage. 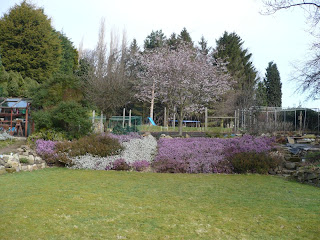 Ceefer cat 'hunting' an interloper in the heather! 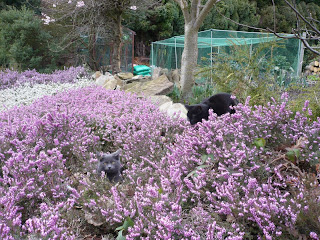 I have several large clumps of these pretty yellow flowers - but NO idea what they are! So if anyone could enlighten me I'd be very grateful! 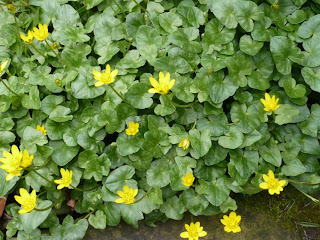 An Acer 'Shin Deshojo' stands out against the euphorbia in a bed I'm currently working on in the back garden.
. 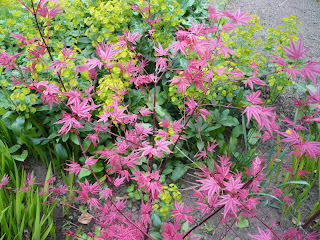 Crocuses nestling in the shelter of the oak tree - my favourite tree in the entire garden. I sneak up and hug it when no-one's looking! 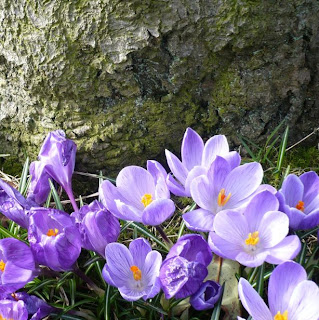 Frank the cat (because of his 'ol blue eyes!) keeping a watchful eye out in amongst the euphorbia. He was one of several garden-based presents I received when I left the NHS to start my alternative therapies business over 3 years ago now and he still makes me smile with his nodding head and wobbly tail! 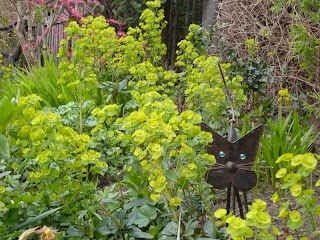 Derbyshire's oldest flowering cherry, well .... flowering really!
We have had some beautiful sunny days with glorious blue skies, but they stopped happening as soon as the cherry had enough blossom to be worthy of photographing! It looks far better in reality than it does in the photo - probably because I haven't worked out how to eliminate backlight yet. It's almost luminescent in an evening as dusk sets in - it's beautiful. It's also huge!
The cherry is on the island at the front of and below the house. 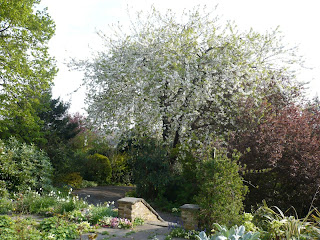 The sky was just teasing here! 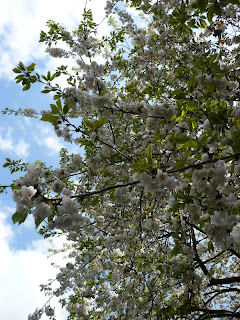 The ornamental cherry on the island mixes so well with the varigated grasses and the moss covered stones - not my doing, I have to confess, but that of the previous owners of our house. 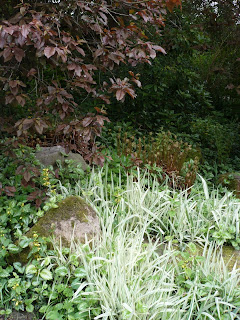 Ferns always look prehistoric and a bit sinister to me as they begin to unfurl, but I like them when they're open so I'm prepared to put up with the few days of creepiness!. 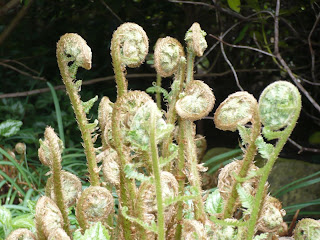 A random mix of (mainly self-set) flowers at the top of the steps at the front of the house. 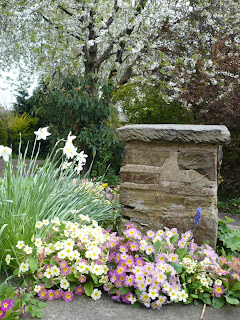 There you go - a whistle-stop tour round some of the garden. Hope you enjoyed it!
Posted by Nutty Gnome at 16:07 35 comments:

The start of the REAL stream building!

Digging out the stream was done in stages - it was hard work and always seemed to involve me needing to go where piles of rocks happened to already be, thus necessitating yet another round of rock shifting! By the time I'd finished the stream I'd finally gotten quite good at moving the rocks to somewhere completely out of the way - although heaven only knows why I couldn't have worked that out earlier!
Digging out the top part of the stream: The route and the shape of the stream opening from the waterfall went through various manifestations before I was satisfied that I'd got it looking 'right'. I'd originally planned to have a promenentary at one side of the waterfall for a granite lantern to stand on, but this would have caused me to have a sharp bend in the stream and when I marked it out with my trusty hosepipe length I wasn't happy with it, so reverted to a more linear exit from the pond and a smoother curve on the stream - but I will find somewhere to put a lantern near the water before I'm finished! 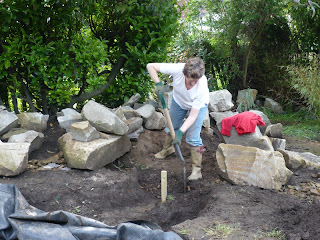 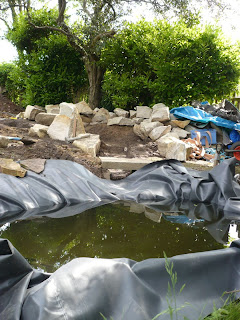 We then laid down the fleece underliner and the butyl top liner down the length of the streambed, making sure that any overlaps overlapped on the downhill side before we glued it! We used a special waterproof glue that still works even when the butyl is damp or even under water - essential in case of leaks, not that there would be any given Himself's meticulous work. 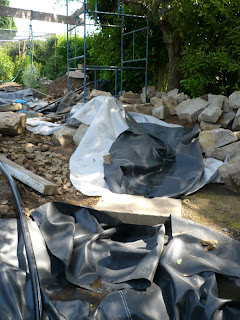 My original idea for the stream had the water cascading at speed down to the bottom pond, but when we tested out the waterfall before I'd fully finished off all the digging and levelling I found that I actually quite liked the accidental look we had achieved of a shallow pool between the pond and the top bridge - and decided to keep it like that! 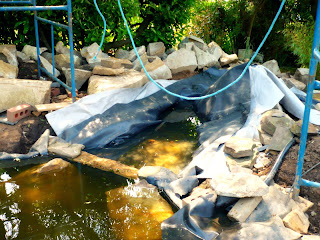 The accidental pool from below! 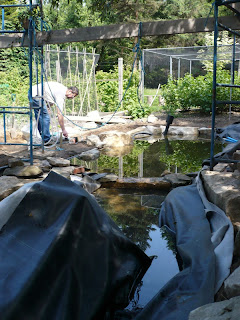 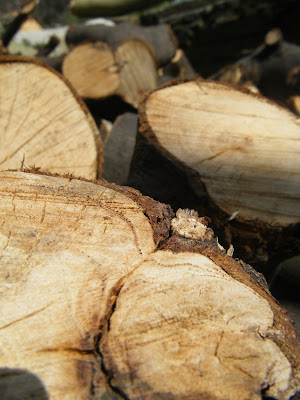 Hello wonderfull readers of my mums blog, I am first born (gnomelet). And though I normally just stick to doing the techi work (backgrounds etc) I just thought I would give you a sneaky peak at the rest of the garden and a tiny bit of the japenese garden as it stands now.
I am back home from uni for easter and I really appreciate the garden all the more when I come from the inner city. Thankfully we have had quite a few days recently of non typical english weather, so I snapped these in the sun. 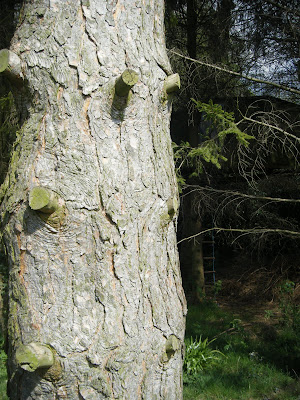 The ladder through the trees goes to the tree house my dad (himself) built. 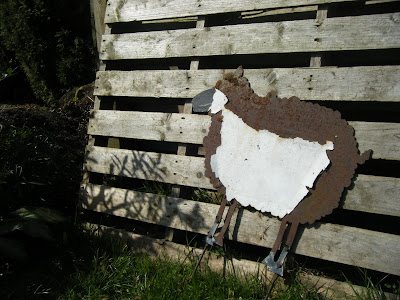 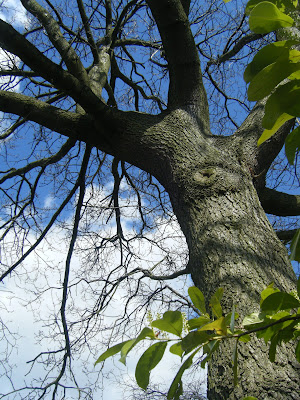 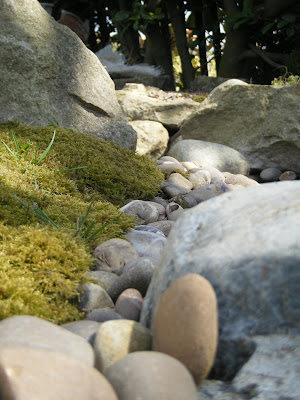 These artfully arranged pebbles go around the edge of the stream. Don't let this picture fool you into thinking they finished the garden though. I zoomed in on the only totally complete section, though when the chief gnome saw this her first thought was that it needed weeding. She will never give up, I can tell you that.
Posted by Ruth at 15:49 21 comments: