After the wettest April to July period since records began back in 1910, my vegetable garden is looking pretty...well, pathetic really! Want to take a tour with me and see what's grown? Well I can tell you now for nowt, it's sod all!! Too wet, too cold and too flamin' miserable!

Here are my sweet peas - the grand total of 3ft tall and, after a couple of days of sunshine in amongst the rain, I've got ONE flower - it's the middle of July for heaven's sake and I've got one sweet pea flower! 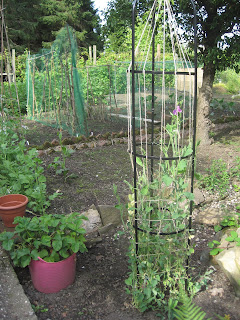 Did you notice the salad bed behind the sweet peas? No? Hardly surprising as nothing has grown here except for 2 bolting spicey mixed leaves and a fine crop of radish tops - but no radish bottoms... as it were! :-(  I seeded and re-seeded about 8 rows of different salad crops and have now given up and am growing them in trays in my greenhouse.

Here are my runner beans. They should have romped up to the top of the frame by now and be full of flowers and beans, not skulking away down at the bottom with narey a flower in sight*sigh*
The potato tops in the background are coming into flower and look healthy enough, but I have no idea of the state of any spuds underneath them...if indeed there are any spuds underneath them! 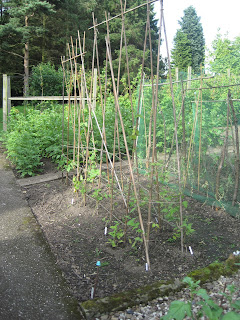 And as for the peas......... :-(  I adore freshly picked peas, but I'll be very lucky to get any this year at the rate things are going - and the rate crops are rotting! 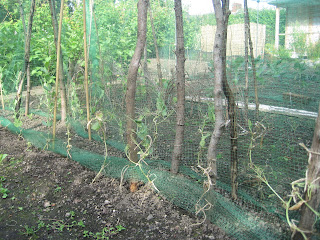 Can you spot the carrots and parsnips? No, neither can I! Actually, after 3 sowings of 3 rows of each I've got the princely sum of 2 carrots and 4 parsnips. What's happened to the rest of them? Drowned! 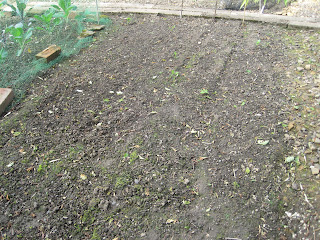 Spinach and kale...juuust about holding their own. But the leeks are struggling as the amount of rain we keep getting in each deluge fills the holes and lifts the leeks out. I've lost count of the number of times I've stuffed the leeks back into the holes...and have NO idea if any of them will stay there long enough to grow. 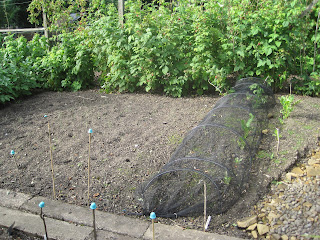 Sweetcorn, squashes, pumpkins and courgettes - many have rotted away and the rest are doing nothing much, so I don't hold out much hope of a crop here either. Last Born is quite happy about this as she really doesn't like courgettes ever since the first year I grew vegetables and grew 8 courgette plants...well I didn't know how many courgettes one plant could produce, did I? We all overdosed on courgettes that year! :-P

Anything that doesn't get drowned has a fair chance of being eaten by the huge slug and snail population that has grown because of the very wet weather. I accidentally trod on one yesterday - it was nearly as big as my foot and it was like squashing a sausage! 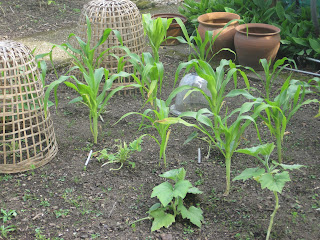 The things that are doing well are....the weeds! Yesterday I completely filled my large green bin with sticky weed and willow bay herb that I pulled up on the island at the front - miserable! ...and I haven't even touched a couple of other weed-filled areas yet :-(

Although one bed along the right hand boundary in the back garden (which has had absolutely No attention whatsoever since I did some planting there in late March) has flowered  well in spite of the weather - it obviously thrives on total neglect and lots and lots and lots of rain! 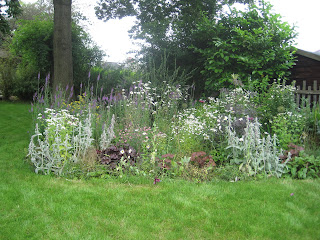 Another special thing that has planted itself in the garden (with a bit of help, obviously!) is my recently acquired sculpture,'Atmos' .......Atmos-sphere, geddit?!! Ah well, it made me laugh!
It was a present to me from me for a job well done recently - something that was so far out of my comfort zone that I could barely see it in the distance.....so you just have to reward yourself after times like that don't you?!

It was made by Alex Moore from Moore Designs in West Sussex and I absolutely love it.Once I'd seen it - in a magazine if I remember rightly, but don't ask me which one, I just had to have it...a response that is most unusual for me except for with plants! And, yes, it IS meant to be rusty and, no, it's not just rusty from all the rain we've had! He makes them in shiny stainless steel too, but I didn't think that'd sit so well in my garden. It was made to order and delivered within a month - and with a phone call from Alex to check when I'd be in to take delivery. A very impressive personalised service.
Check out Alex's website for some other great ideas! 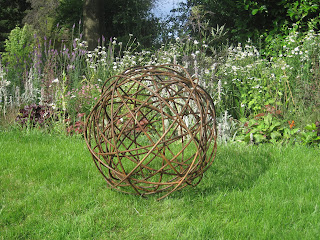 Another acquisition that cheers me up every time I look out of the kitchen window is Gerald, my Javanese wood carving. Why Gerald? That is First-Born's fault! I'd popped to Nottingham for the day to see her back in April and there was a craft market on....dangerous places, craft markets! Anyway, we both loved the carvings on one stall and I couldn't resist buying this one. I had a very interesting conversation with the stall holder about the village he supports by selling their produce, about the Suar hardwood they use and about various Javanese names that I could pick from. As we walked away, purchase completed, First-Born announced "Gerald. You should call him Gerald"!

You try remembering complicated Javanese names once Gerald is in your head!!! 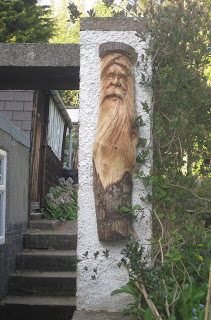 Hope the weather's better where you are?!
Posted by Nutty Gnome at 21:06 19 comments: