Himself gets expansionist ideas!

Don't get me wrong here - I'm not talking about annexing France or invading Wales, just something a bit more, well, modest really!

Let me take you back to late spring of last year........!
As we stood on the planks on the as-yet-to-be-completed veranda, a strange look came over Himself's face. He paused, then sucked in through his teeth in a 'there's a bit of problem' sort of way before sighing and saying (in a very Eyore sort of voice) "Pond's not big enough".
I coughed and spluttered for a bit before conceding that, actually, he was right! Now that the tea house was up and the extent to which the veranda covered part of the pond was fully obvious, the pond was diminished and out of proportion.
I sighed. I knew what this meant ......I would have to extend the pond! 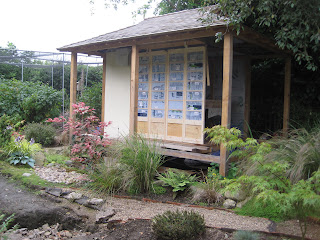 However, I had a cunning plan. I called on my friend Sarah, who has the strength and endurance of an Amazonian woman! A few weeks later Sarah came over for the day and we dug. I had already cleared the beach, stones and plants from in and around the edge of the pond and Himself and I had freed up the liner and underlay fleece, folded it back over a plank and weighed it down with the stones I'd removed. 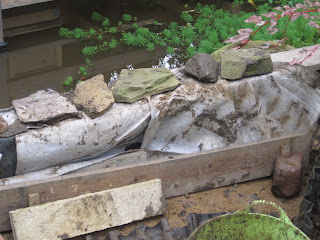 We filled innumerable trugs, emptying them into the nearby barrow which Sarah then hauled up the garden to dump on a tarp for use later on. 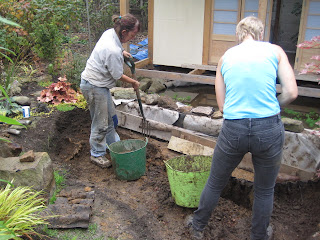 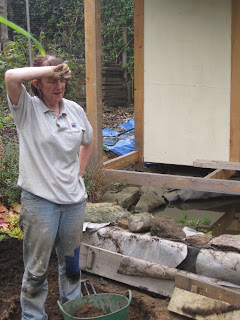 Pond extension hole finished, work then ground to a halt on that project as other things in the garden took priority.
Ten months later, with a party deadline looming, we realised that we couldn't put it off any longer just because we weren't quite sure how to do it. So, taking a deep breath........
we built a temporary pond on the lawn using our largest groundsheet, some random planks and old bricks. We used the pond pump to take the water out of the top pond and into the temporary pond. 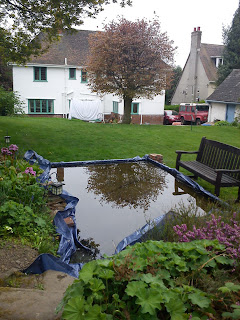 Taking enough water out to get the level to well below the original shelf level so that we could excavate under the liner where the old and new parts would join up. 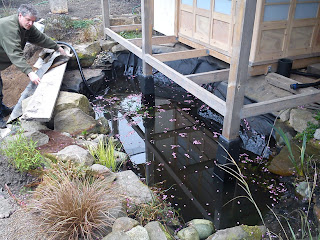 We cleared out all the zillions of leaves and bucketloads of gunk that had accumulated in the hole whilst we'd ignored it and Himself barrowed back down the garden some of the sandstone that Sarah had barrowed up last year.
We then put it all through a griddle to separate out sand and stones - the stones were then used to make foundations in a new path I was building elsewhere (all will be revealed on that little task later!) 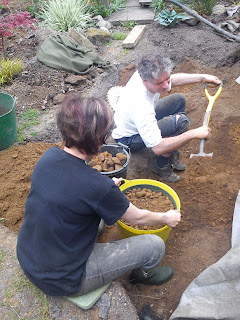 and the sand was used to line the hole, the new shelf and the bit under the liner where the two parts would meet. 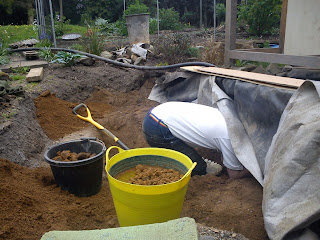 Whilst Himself was grovelling about under the liner, I took the opportunity to sort out the 'rockage' in front of the waterfall as I'd never been totally satisfied with it. I cleared everything out except for the rocks that we'd hoisted into place - I'm not daft, I wasn't even going to think about moving them! 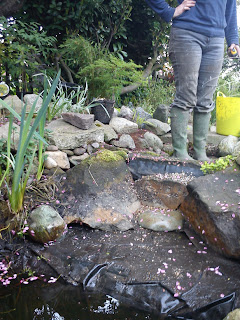 I cleaned the base, put new fleece underlay in place and had a happy time arranging new rocks until I was satisfied with how they looked. The frog who lives behind the left-hand big rock kept popping up to glower at me to try and get his water back, but we weren't to be rushed on this. 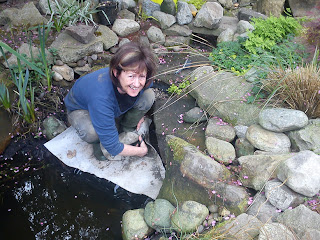 Somewhere along the line it was decided that the bottom of the pond ought to be de-gunked ....a luuurvely job! 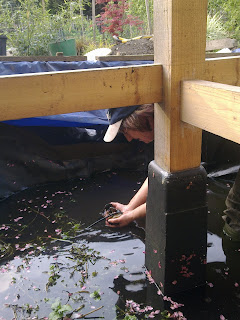 and I had to be very careful not to lean too far over ! 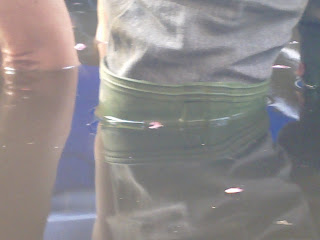 The bit that had put us off doing the extension was the joining of the new liner to the existing liner. In the end, it was just like doing a giant 15ft long bicycle tyre puncture repair! I haven't got any photos of the process as we were more concerned about getting it right than getting it photographed! We had to clean, de-grease and scour the old liner, apply glue to the edges of both liners, wait for it to go tacky then stick a special sealant strip one one side, using a decorators' roller to press it down and get any air bubbles out, whilst making sure that there were no kinks, twists or creases in the liner or sealant strip - easier said than done when the liner isn't a straight edge and you're pressing down on sand!
Himself had, naturally, worked out how to get round this. He used chalk to mark where to glue the liner and created a solid base underneath where we were working by using a strip of hardboard propped up on wood - with stakes driven into the base of the extension to make sure it was secure (never knowingly overcomplicated or over engineered!) to rest the liner edges on and give us something solid to work against. He's good!
We then had to position the 2nd edge on top of the sealant strip, hold it in place, peel off the special backing paper and roller the 2nd liner onto the 1st liner all at the same time ...a tricky business!
It all then had to be left overnight to go off - but covered by a tarp in case of rain as we weren't allowed to let it get wet at this point.
The following day was crunch time. We laid out the fleece underlay then carefully unfurled the joined liner and eased it out into position - you can see the fold where the two liners join, running between the 2 large rocks of the original pond. Then we pumped the water back into the pond and waited with baited breath to see if it leaked.
Of course it didn't leak - Himself was in charge! 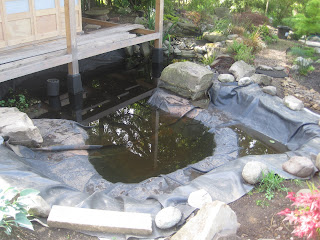 A couple of weekends later, when the water hadn't gone down at all, Himself declared that he was satisfied with the seal and started making the pond edging. He excavated enough sand and soil away to be able to put wooden strips in to fold the liner over and give a good, solid edge for me to put rocks and stuff on - naturally the rough wood had strips of fleece on top so that the liner wouldn't get ripped. 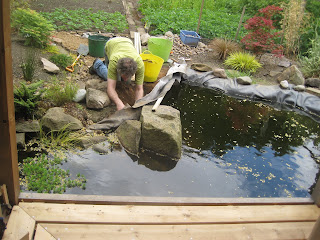 He built a measuring 'thing' to ensure that the edge was level all the way round. 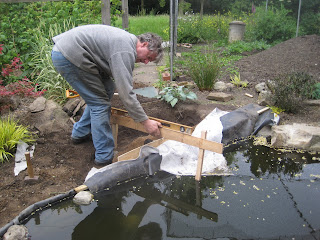 Then he tucked the liner into place and backfilled with sand and soil. 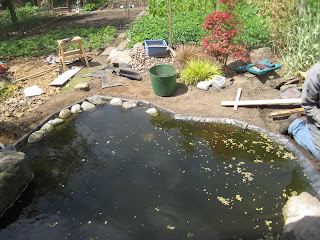 Me? I was busy on the inside of the tea house - but I was happy with my waterfall rockage! 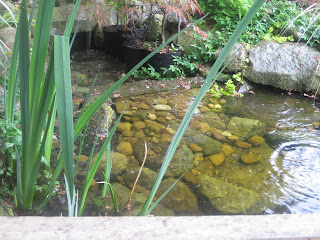 It's ended up a bit of a long post, so I'll leave the arty-farty finishing off stuff we did until next time!
Posted by Nutty Gnome at 11:13 42 comments: