Right, a bit of a warning before we start....it's a long one this one! You might want to pop to the loo, make a nice cup of tea or get a glass of your favourite tipple to keep you company as we go! We're off back to last summer again.
Before we could start on the bottom pond properly, we had to sort out the waterfall stone out of the top pond - it's never straightforward is it?! The waterfall stone was a 50p offcut from the local stonemason's scrap pile a few years ago and was never a brilliant stone. It really didn't like the hard winters of 2010 and 2011 - the frost and snow caused it to split along its natural striations and the top pond slowly went down by about 3 inches, which was somewhat worrying at first as we spotted the water level drop but didn't know the cause. I spent ages one weekend carefully working my way around the entire edge of the pond, moving stones, checking that the edge support hadn't failed, looking for tears etc, but all to no avail - which left a split waterfall stone as the only answer.

We aquired an old stone step from somewhere (but I can't remember where as it was so long ago!), which was a bit big and needed cutting to size.I shifted the streamside stones out of the way then Himself and I gently peeled the glued liner away from the original, broken stone, lifted it out....and it fell to pieces, so at least our deduction about the cause of the water level drop was proved correct!!! 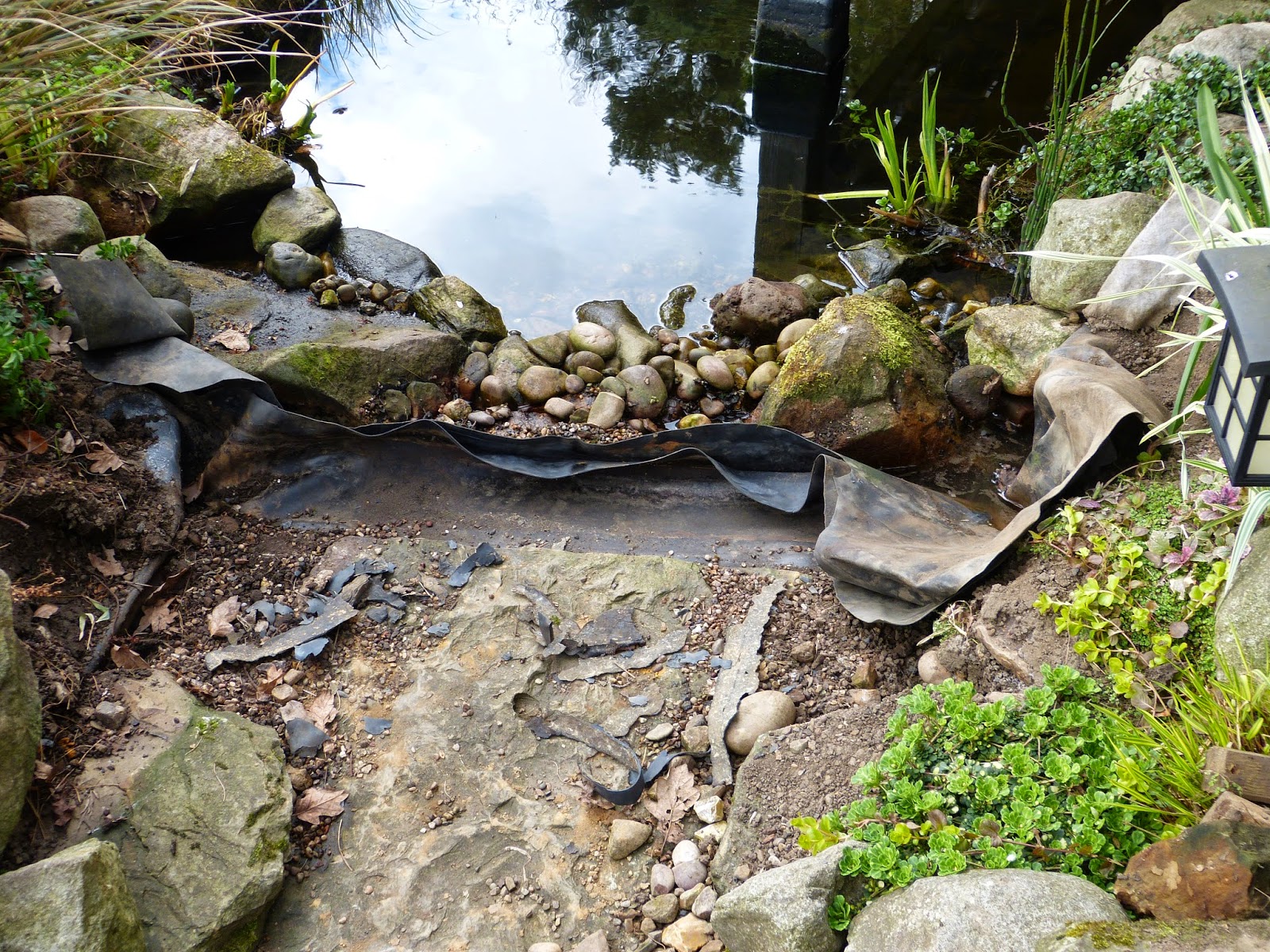 The only time Himself really pays heed to the old 'elf n safety' is when he's using the chainsaw or the stone cutter and duely kevlar gatered, gloved and helmetted up he set about cutting the stone to size, having measured and checked several times each side that had to be cut .
It has to be said at this point that our dear, happy, cheerful neighbour Mrs AnotherBloodyEyesore was absolutely delighted by the stone cutting and yelled jaunty encouragement over the hedge at us for a good ten minutes! She is such a joy! ;-P 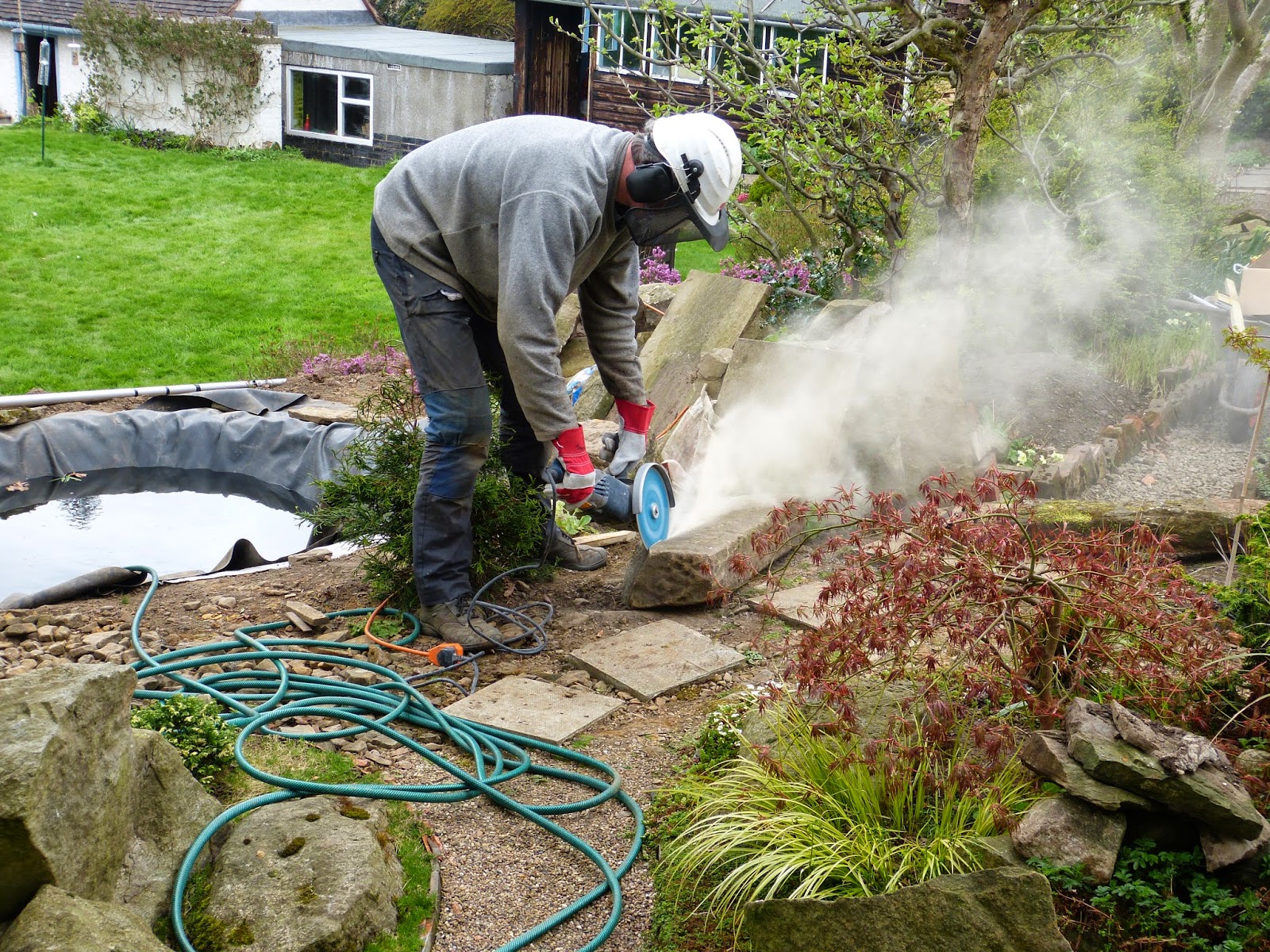 Once cutting was completed Himself put it in place and tickled about with it until it was completely level. 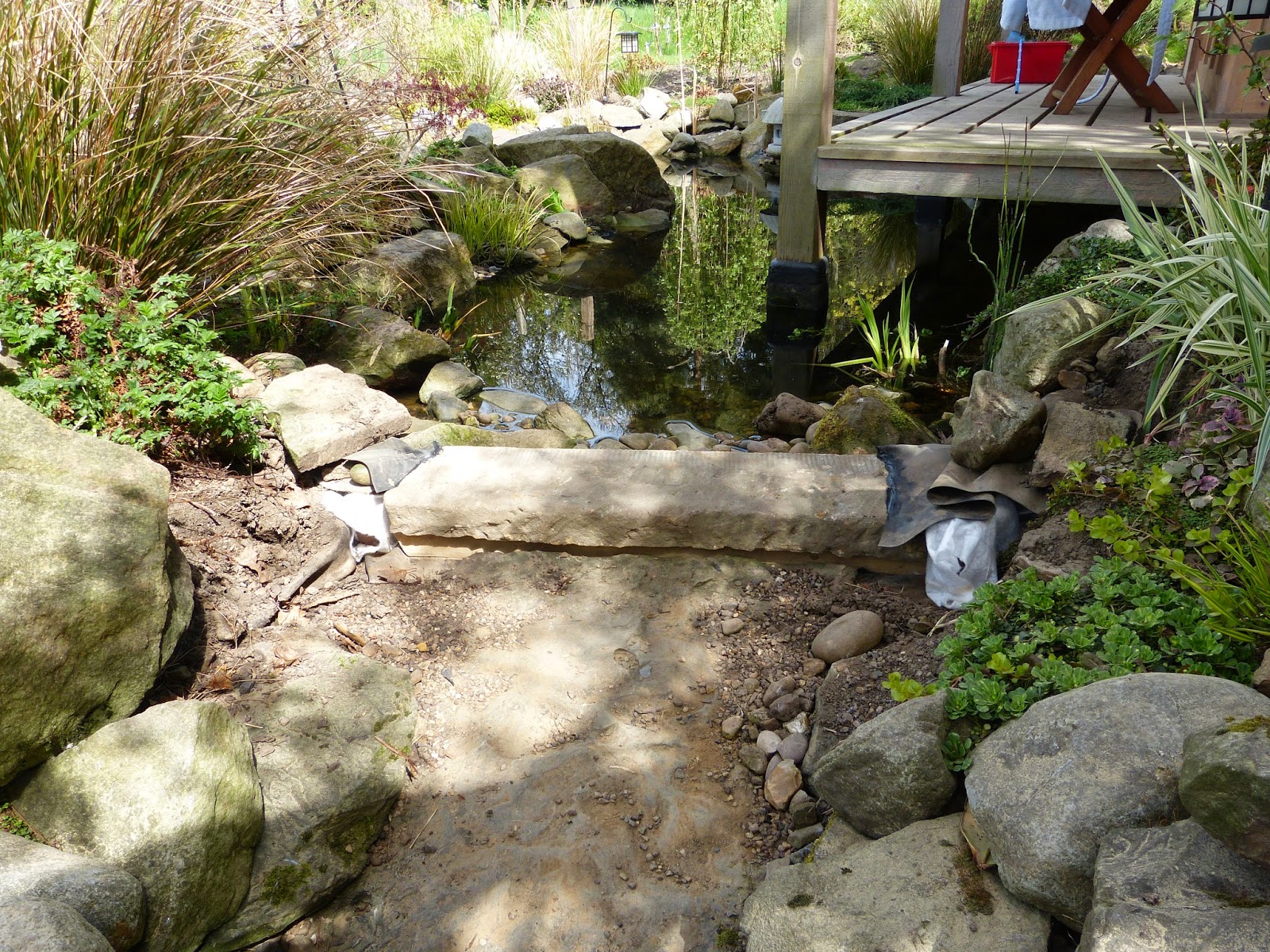 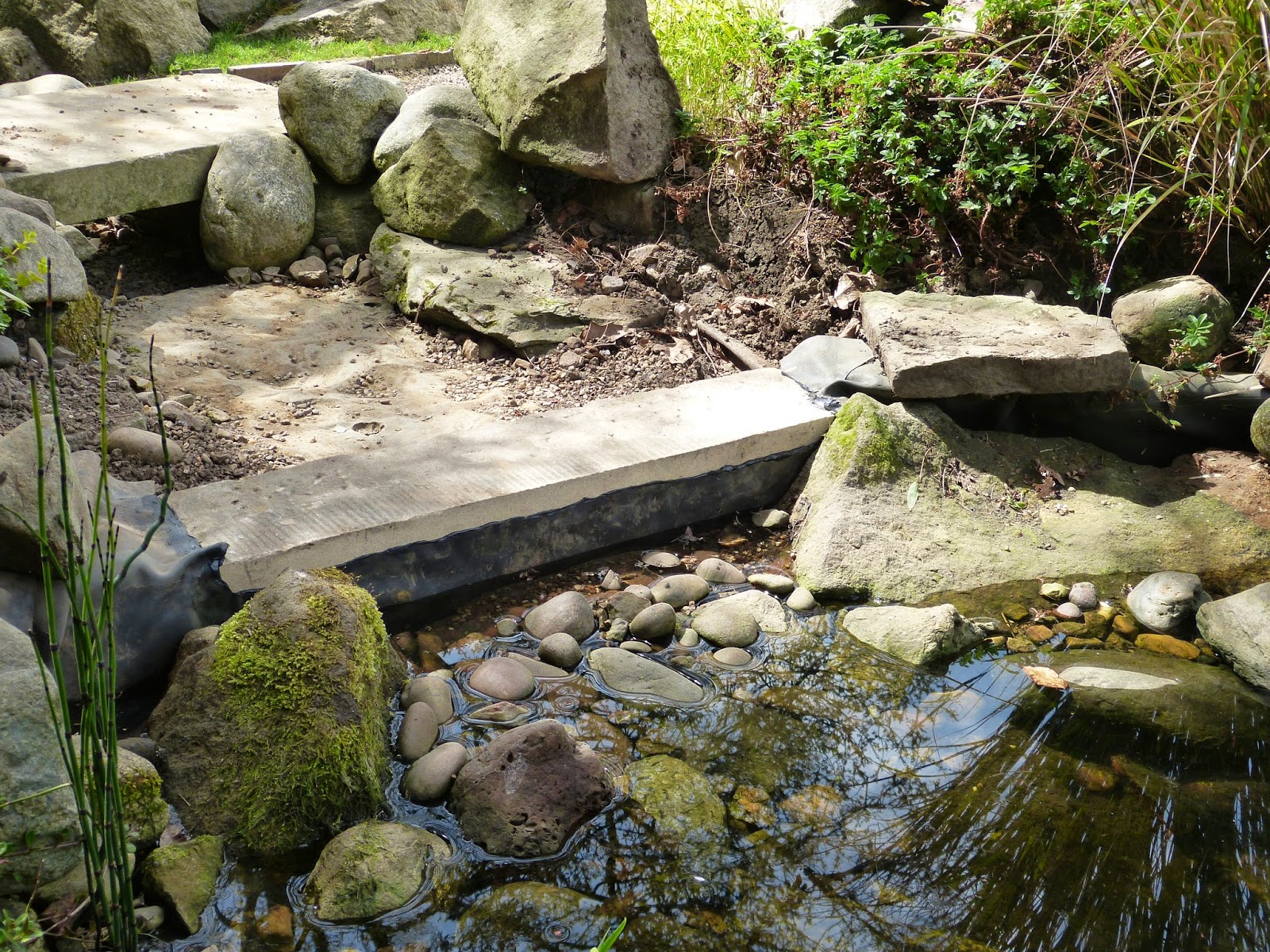 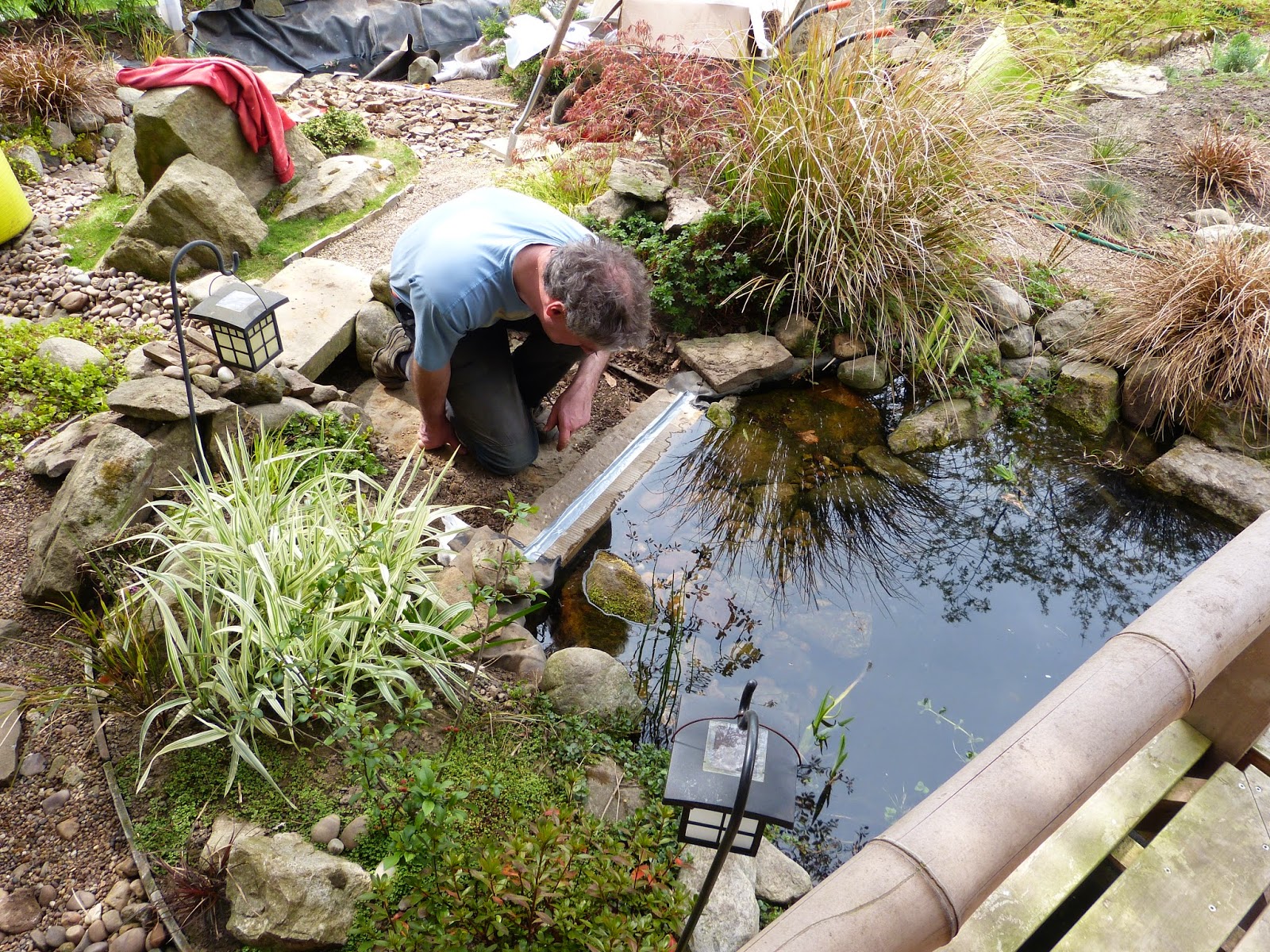 and we filled the pond back up to its original and correct level. After two years of low water it was lovely to have it back to normal again....however, I then had to try and retro-fit all the streamside stones back into their old - and sometimes new places. 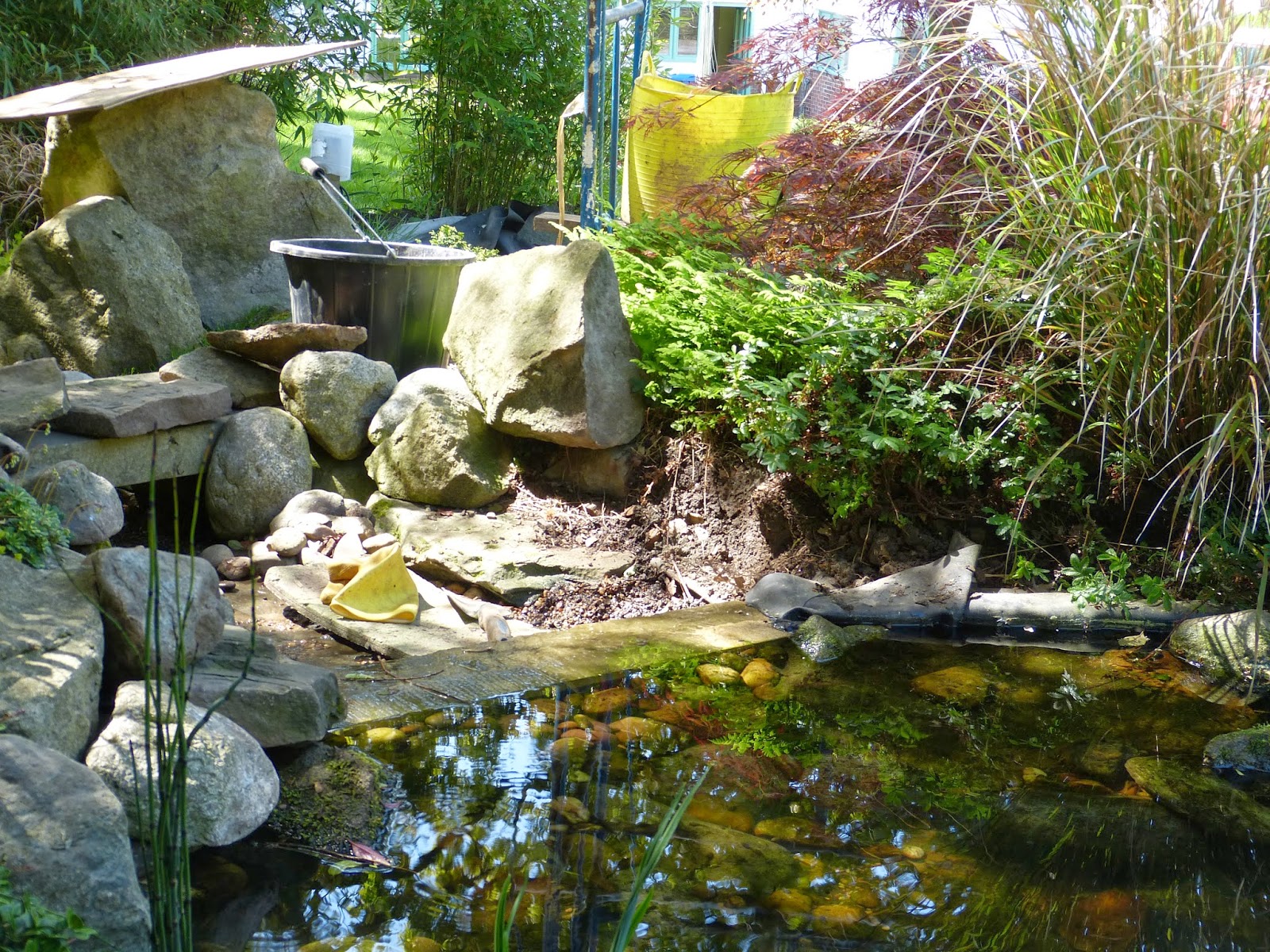 It didn't end upquite the same as previously, but I was still happy with the result. 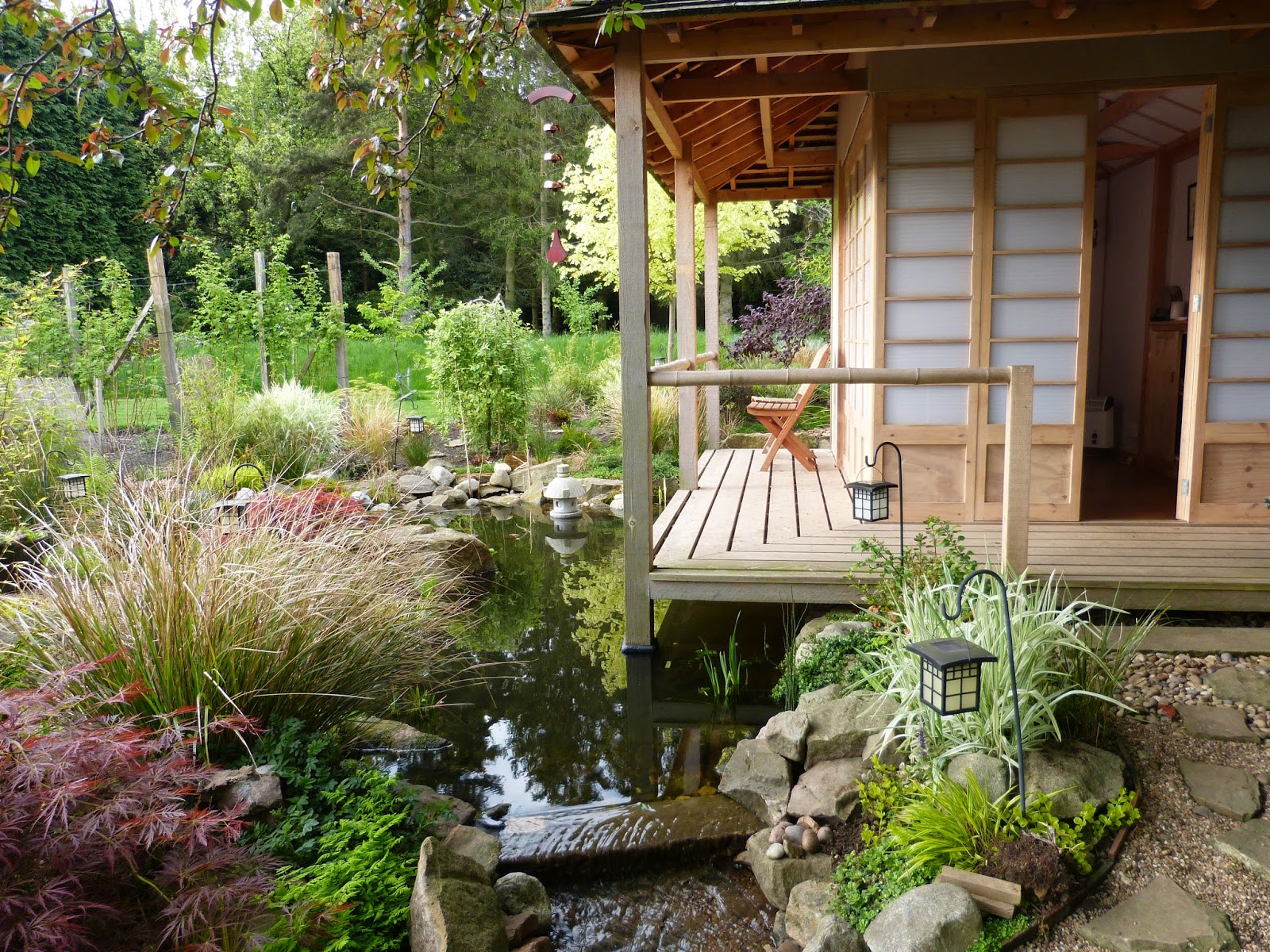 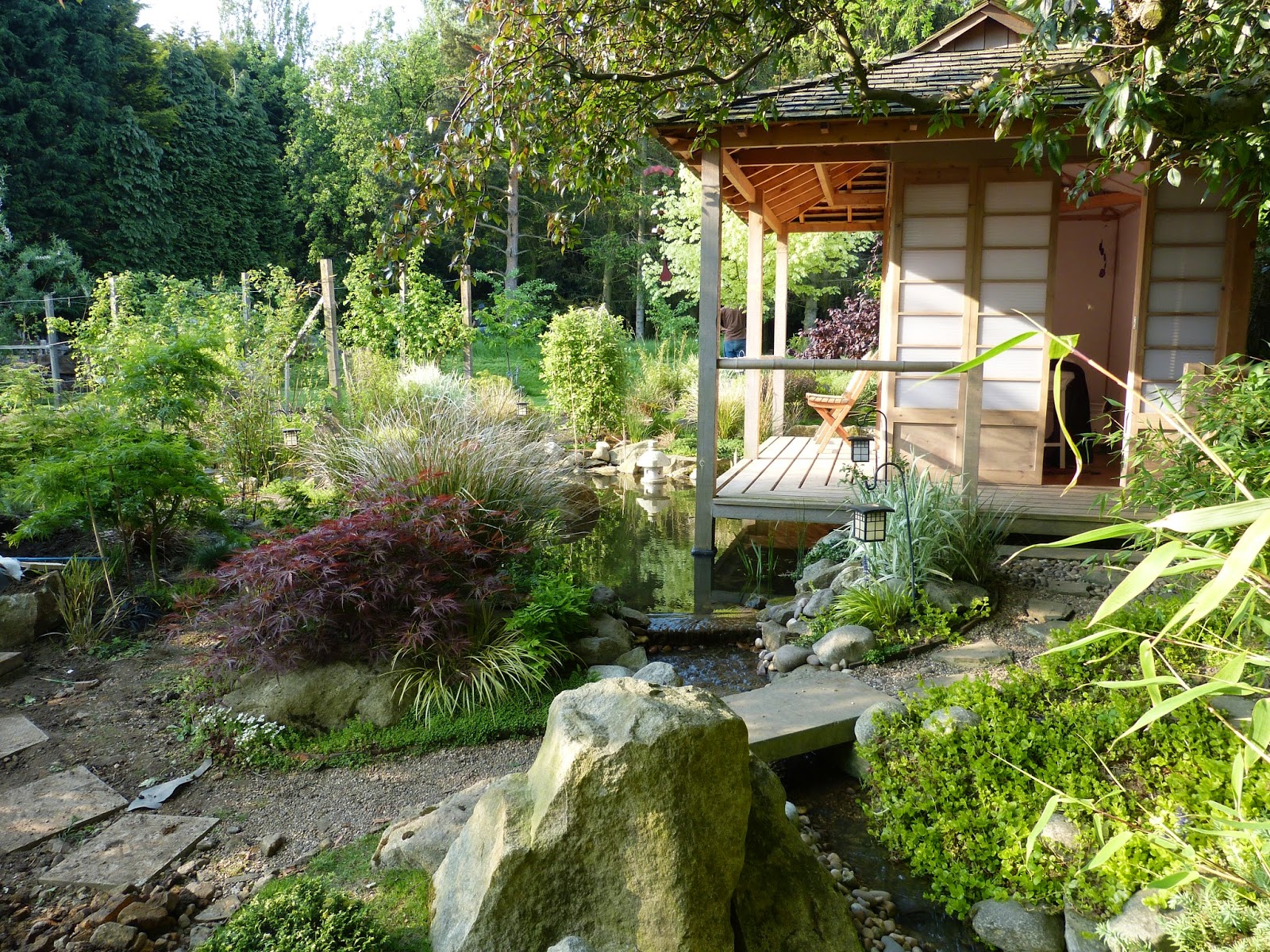 Himself had a little respite from playing with big boys toys by spending time packing sand onto the shelves on the bottom pond in preparation for the arty-farty stone placement. Last-Born, as you can see, was fully engaged in the whole pond building process and in there getting down and dirty with us - not! 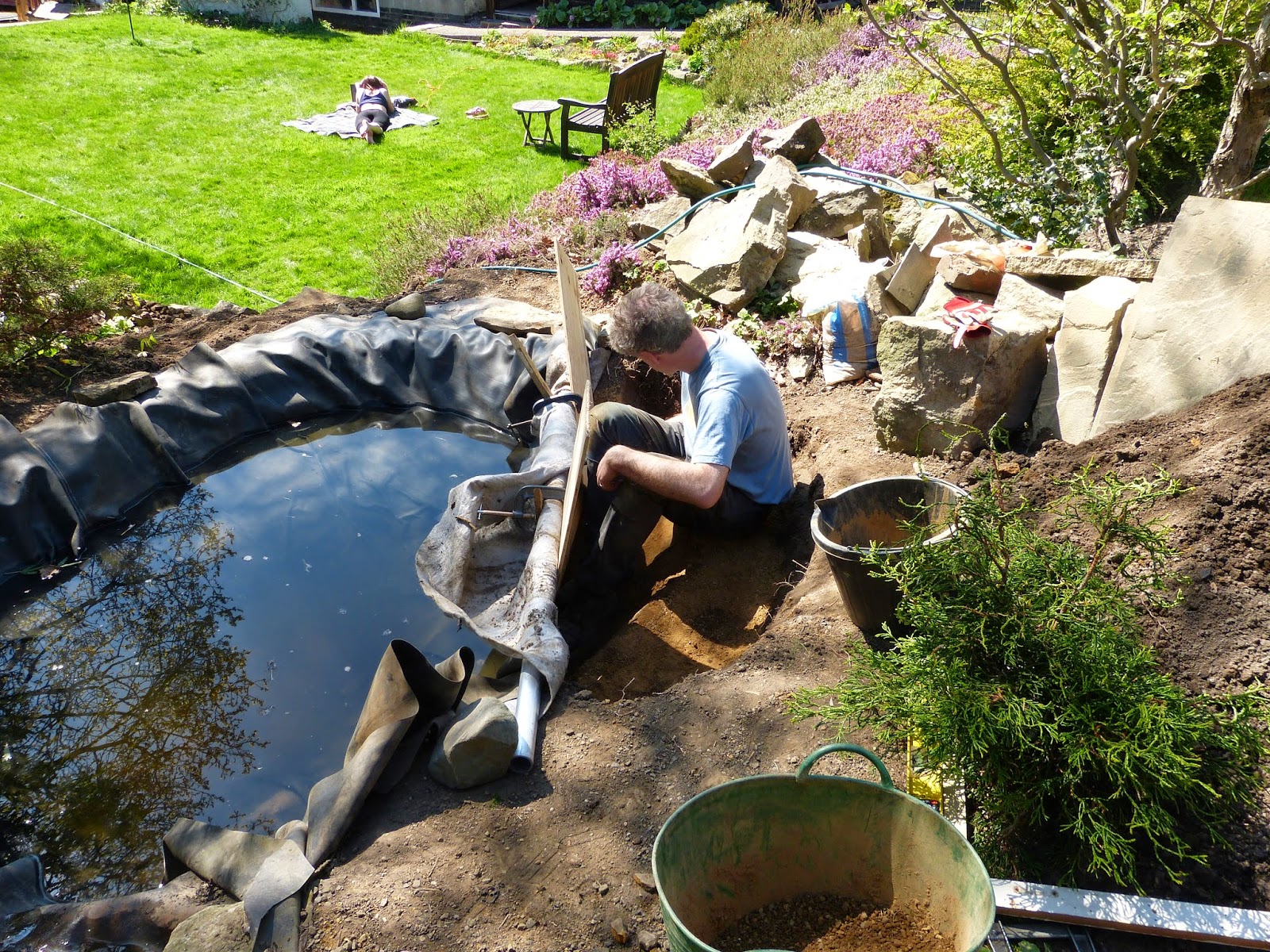 The following weekend The Wonderful Pete (TWP) came up to help. He has done this so often that there is no way we can ever repay his imense kindness....other than with lots of good food and nice wine or beer when he's with us, obviously!
Anyway, we started off shifting the stones onto the pond shelf using  the scaffold poles to hoist them in..... 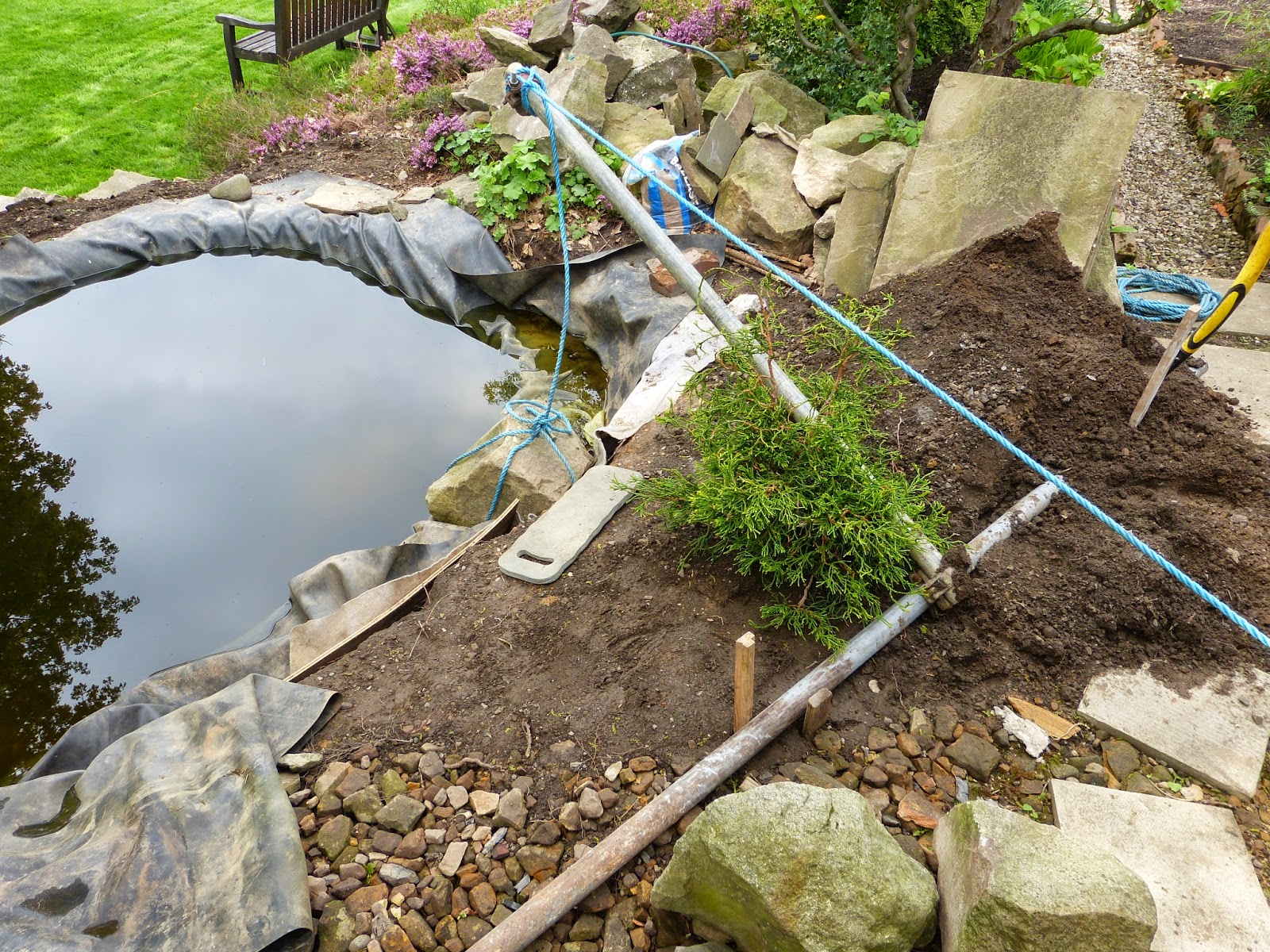 but the second stone bent the pole, so we had to bring the big guns in! Given that we  were working on a sloping site with veeeeerrrrry heavy stones, it seemed prudent to fill the trugs with stones and put them on the scaffold boards for a bit of extra ballast.....just in case! It may not be elegant, but it does work. 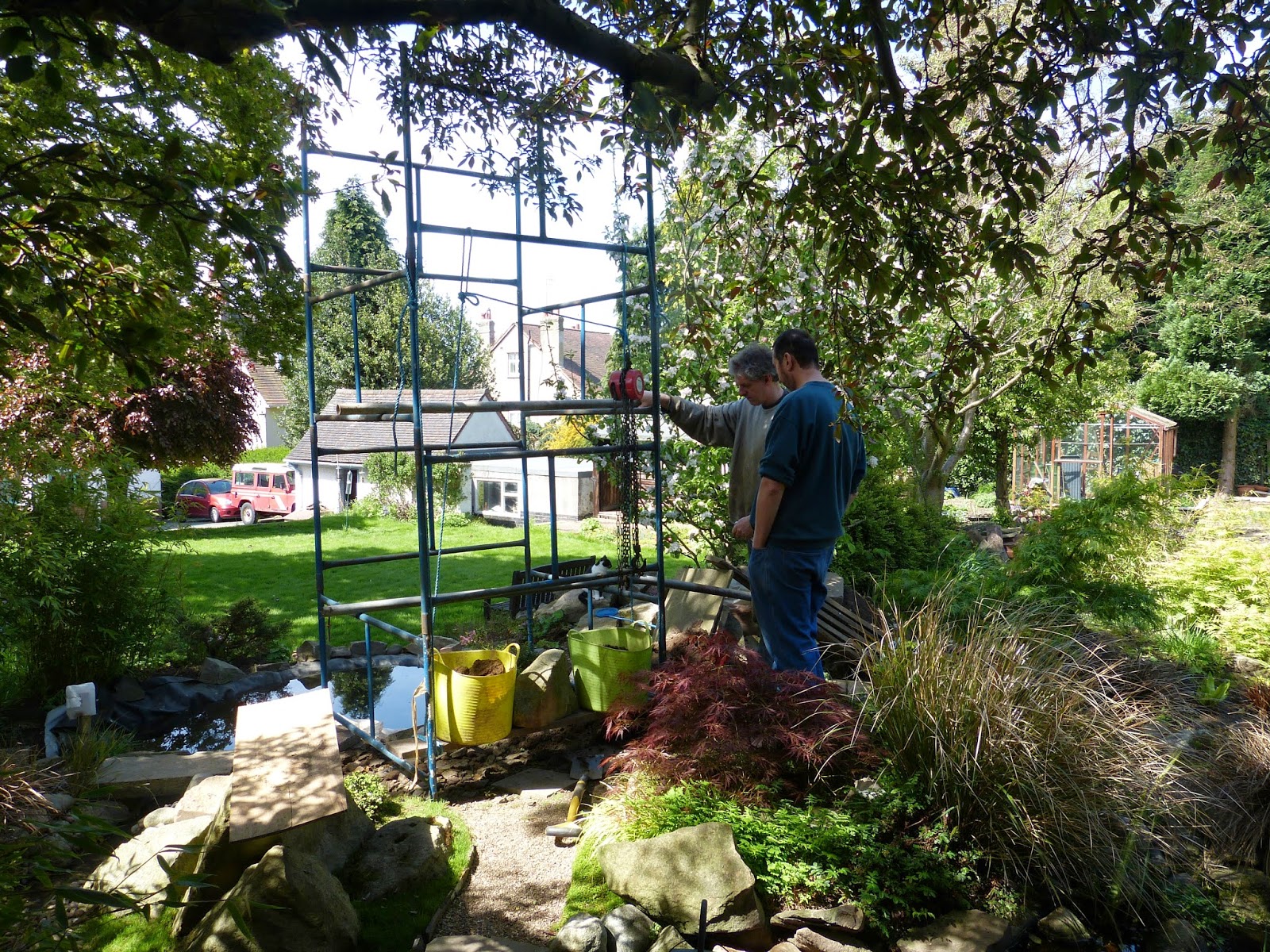 With lots of hoisting, pulling, puffing, panting and just the occasional  rude word, 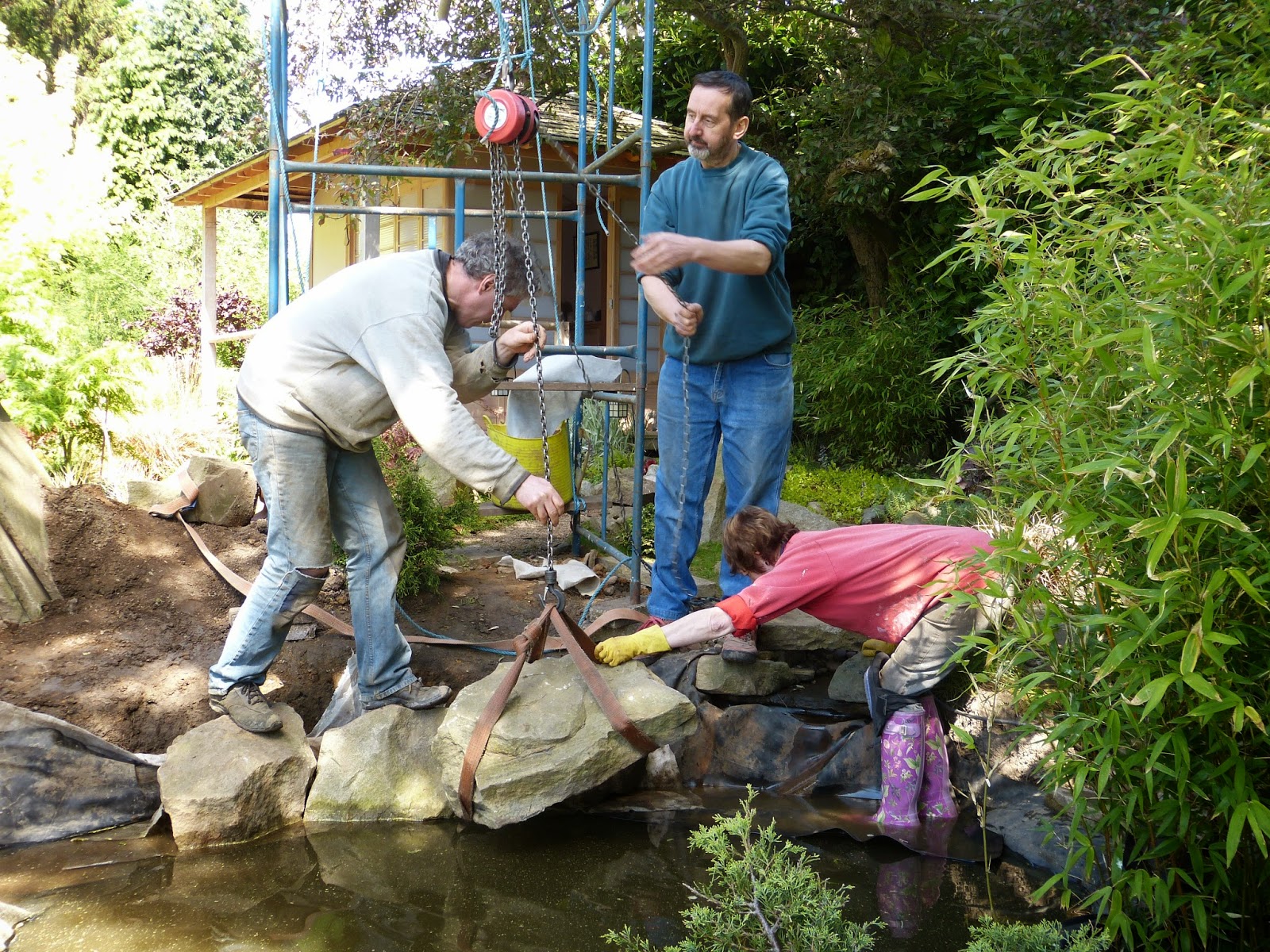 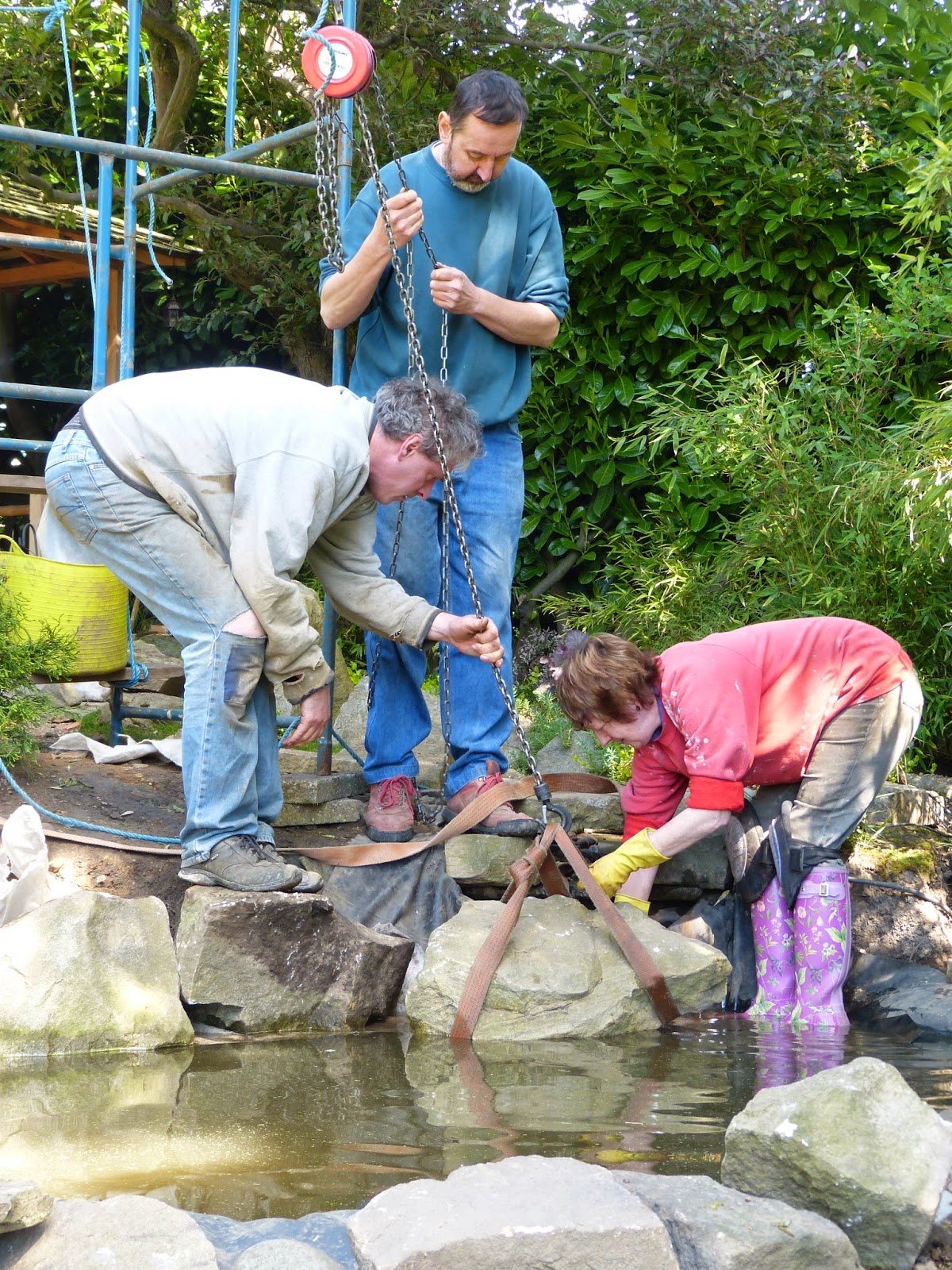 and then down the far side of the pond where the shelf is at its widest point. 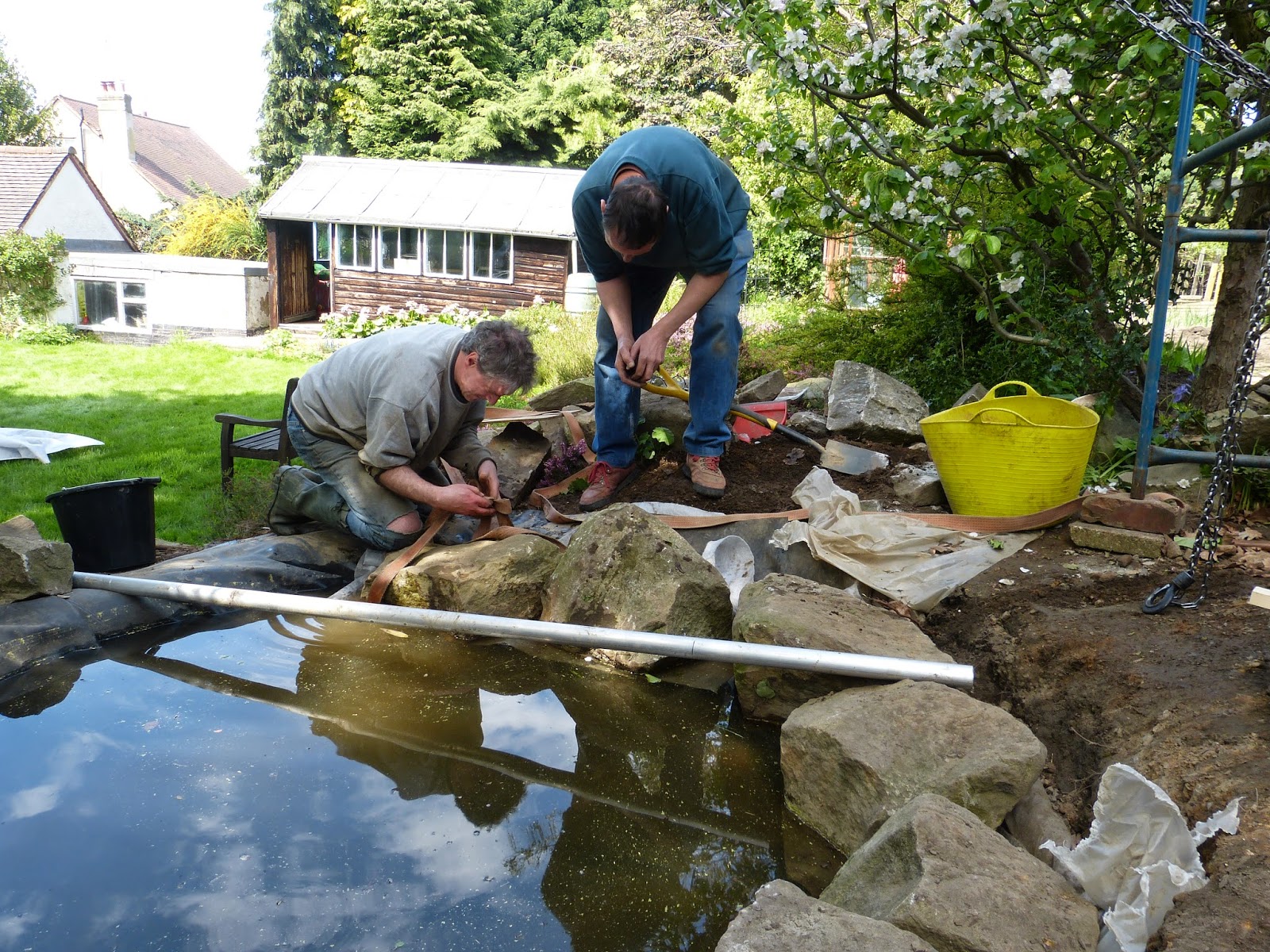 Once the big rocks were in their 'right' places ...which did involve shifting one or two of them into different places a couple of times until the Art Department (me) was happy with them...even if Himself and TWP were less than impressed with me! I then hoiked various smaller stones around happily for about 3 weeks, or maybe it just felt like that?! until I was happy with the overall effect. Then we ran the stream to get the levels in the bottom pond right and see how it all looked. 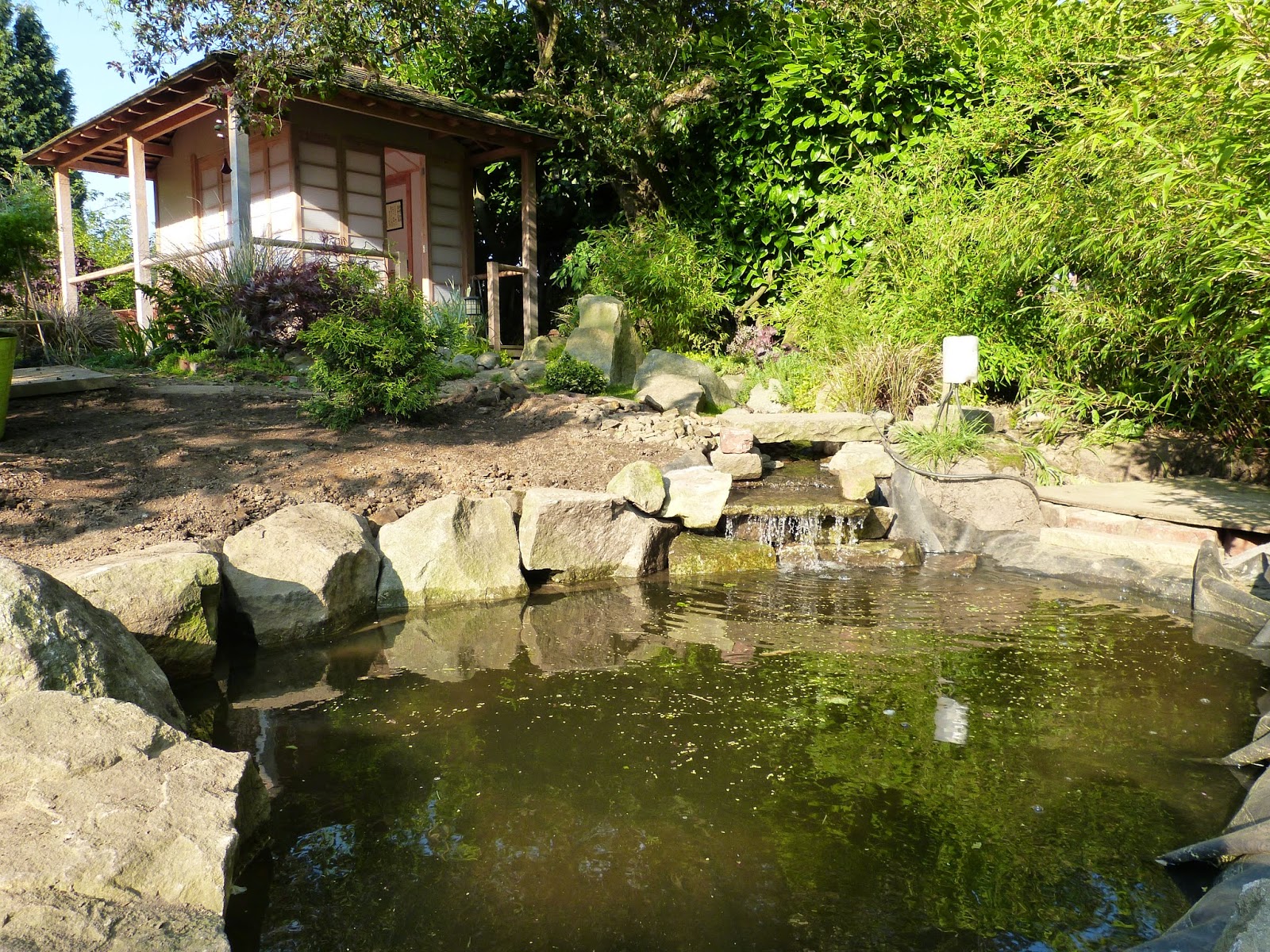 Somehow, somewhere along the way, even though the pond's hard landscaping wasn't complete some plants managed to jump in and get settled down...don't know how that happened! I then spent some time building up the bottom part of the stream and the waterfall - contrary to popular family belief, this was NOT faffing about with rocks and stones, this was serious naturalisation of an artificial pond!
It's surprisingly hard to get it right!
I then moved onto the not-yet-garden and planted various plants that I nicked from other parts of the garden and some grotty unloved Hebes I bought for pennies from the 'rescue' table at the local garden centre. 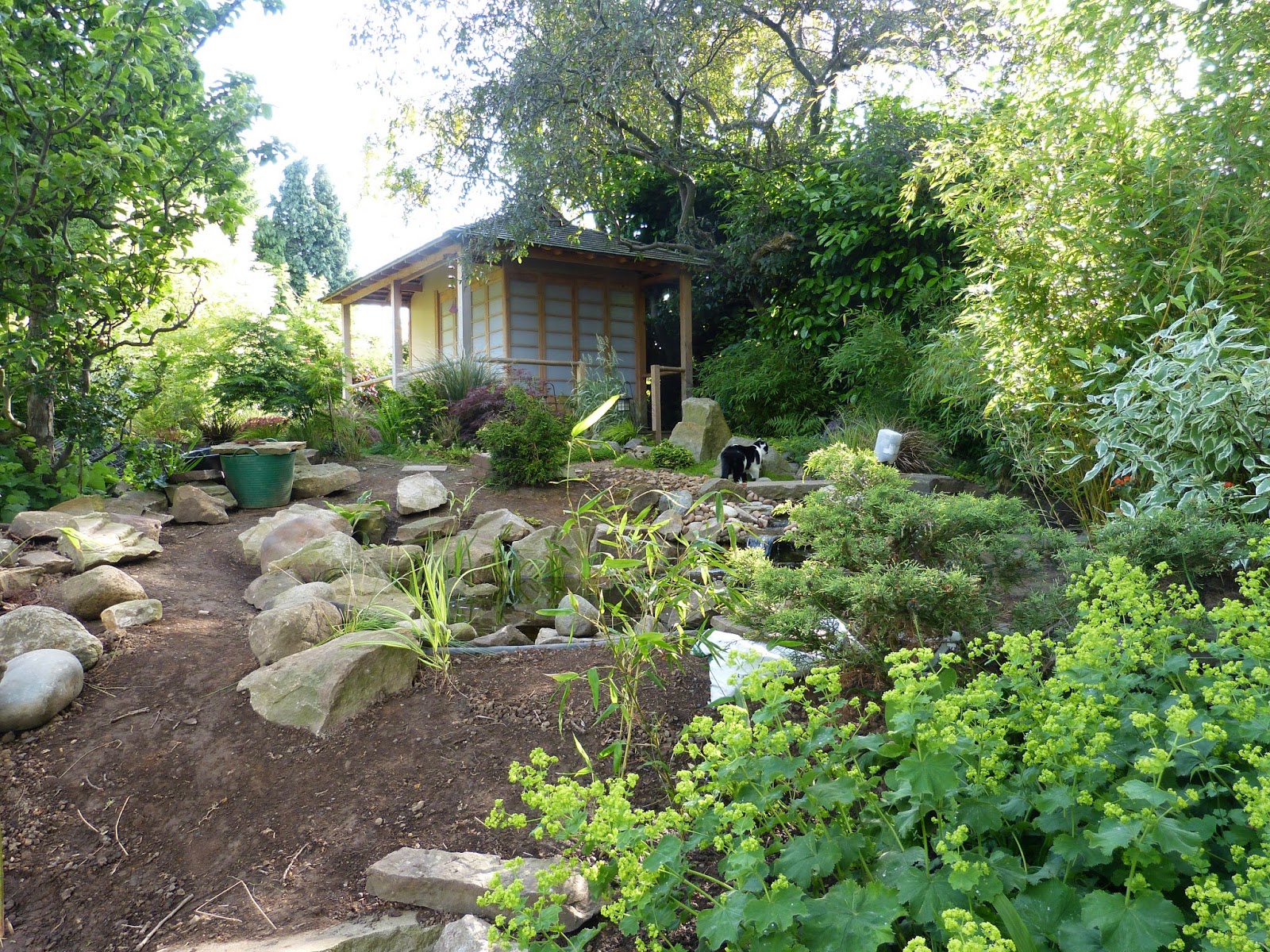 Once I'd finally finished playing getting it to the point where I was happy with it, it all got left until a couple of weeks ago - yes folks, this year!!! when I decided that I really couldn't bear the lack of proper garden or skanky, messy and frankly slightly unsafe hotchpotch of flagstones and mud that made up part of the still unfinished path for a minute longer. So I started off by transplanting all the 'mind your own business', moss and other ground covering plants that had been taking over aprts of the path that has been in situ for 2 or 3 years so that I had a clear view of things first. It took a surprisingly long time to do that!

I followed this up with a bit of excavating down to the sandstone path  foundations I'd put in about 4 years ago (things really don't happen quickly on this project!) and getting the levels right, followed by a few hours of digging of slots to get the old roof tiles in to create a nice level edge to both sides of the path - aided by a bit of stick carefully broken to the right length to act as my path-width measurer ...technology? Bhah!
and finished off by laying the weed supressant membrane and covering it in a couple of inches of pea gravel......followed by some serious arty-farty pretty gravel soothing to make me happy! Doesn't take much does it?! :-P 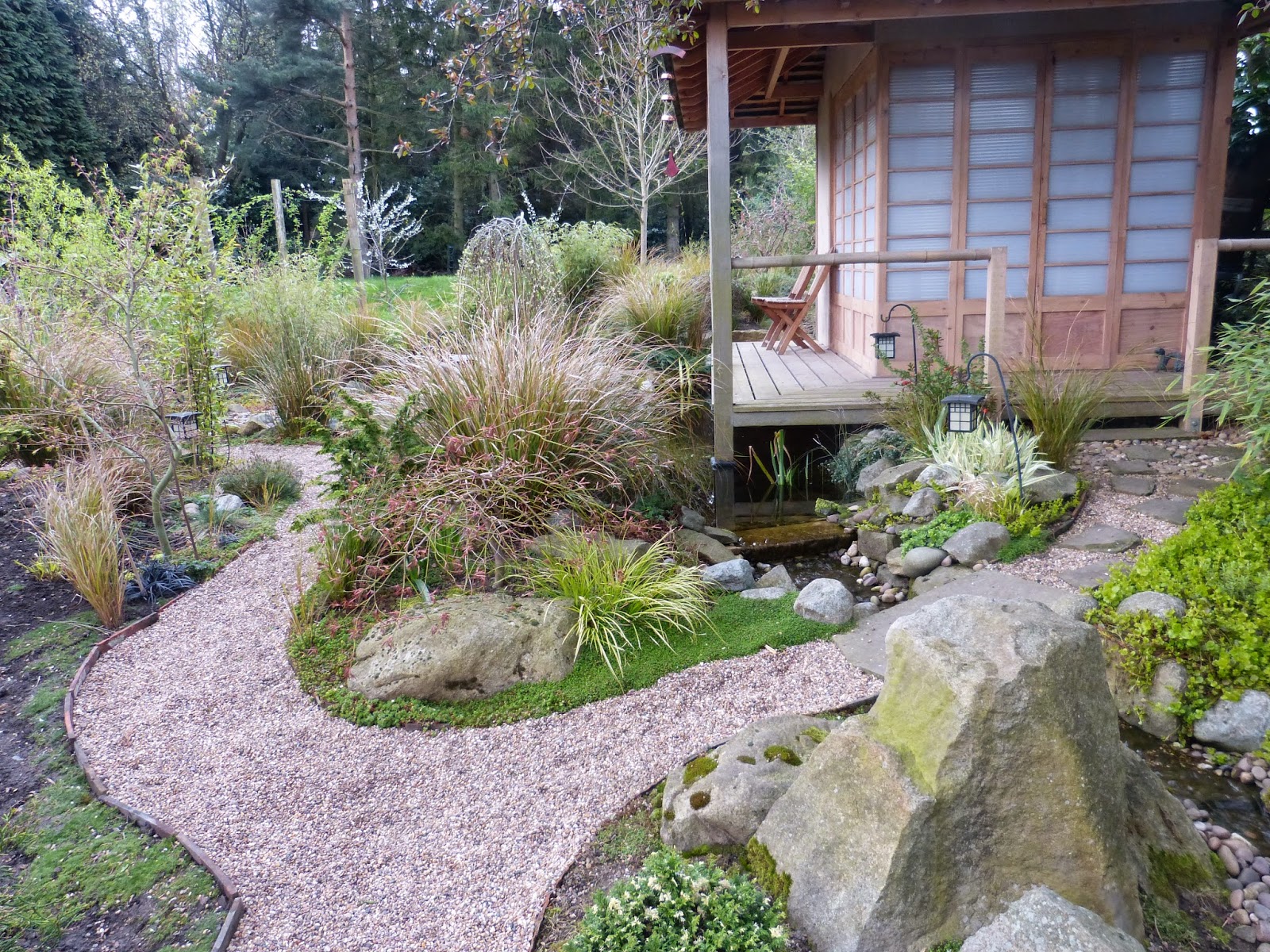 So I now have a complete and safe route to both bridges....and as it's a bit steep in places I might well end up putting stepping stones into the gravel as I suspect I may find lots of gravel down by the bottom bridge! 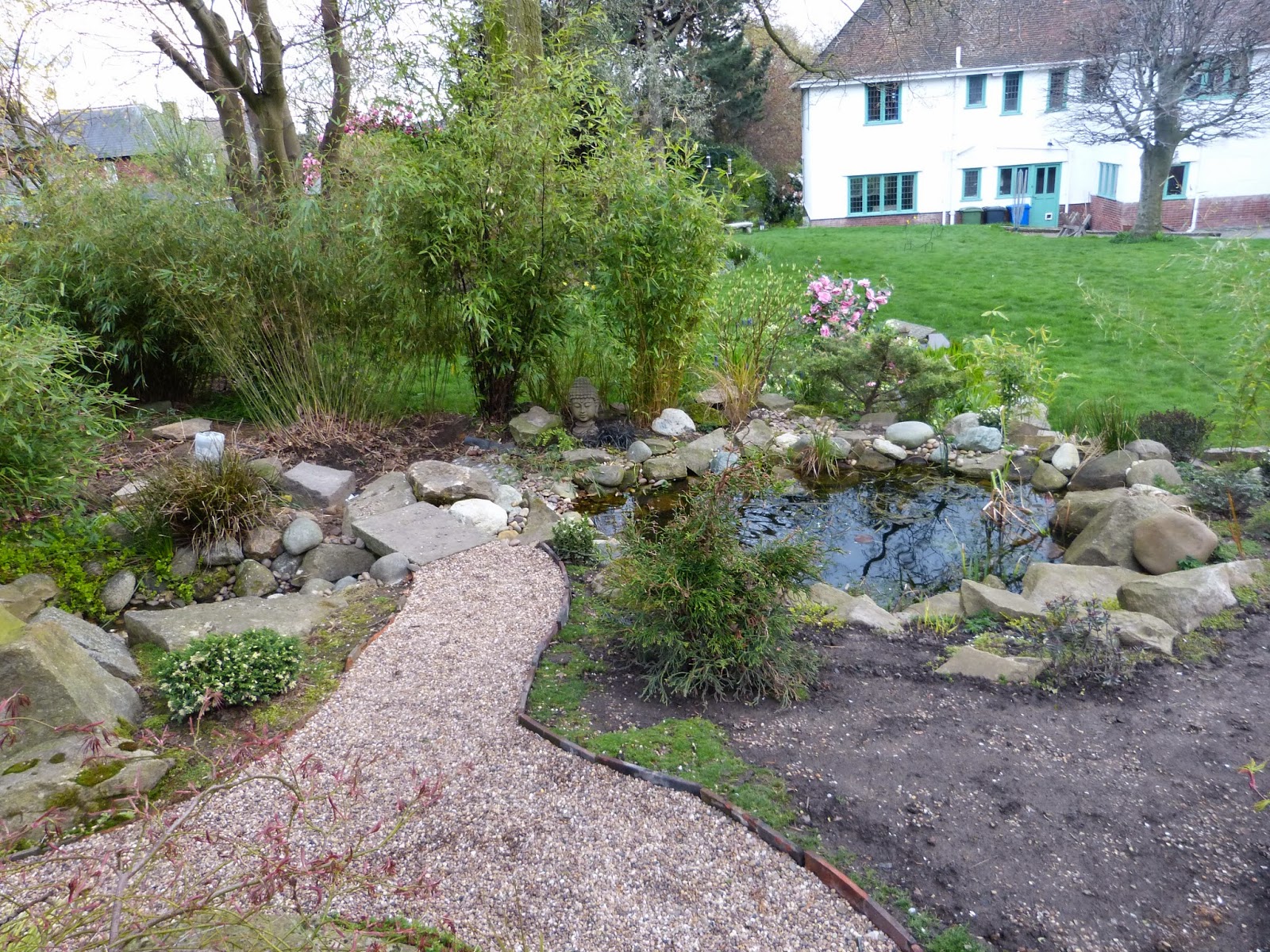 The plants in the pond were put in last year, as were most of the plants around the edges, but I have plans! They mainly involve Hebes, Box balls, moss and the like, but possibly not more bamboo - unless a very pretty one catches my eye! 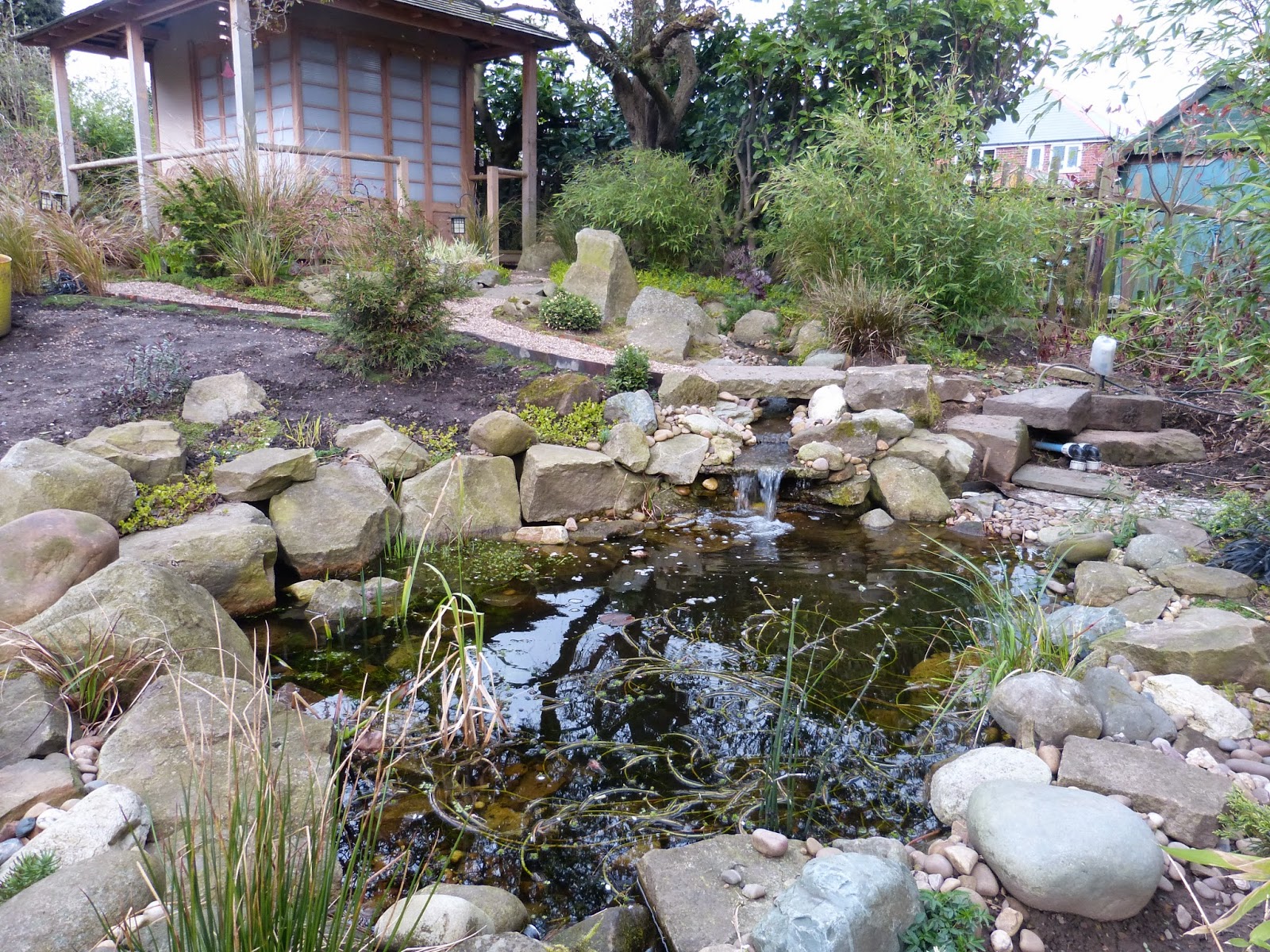 To finish off then, a little quiz!
Spot the name of one of my favourite films in this photo! A smugness award to the first person to get it :-) 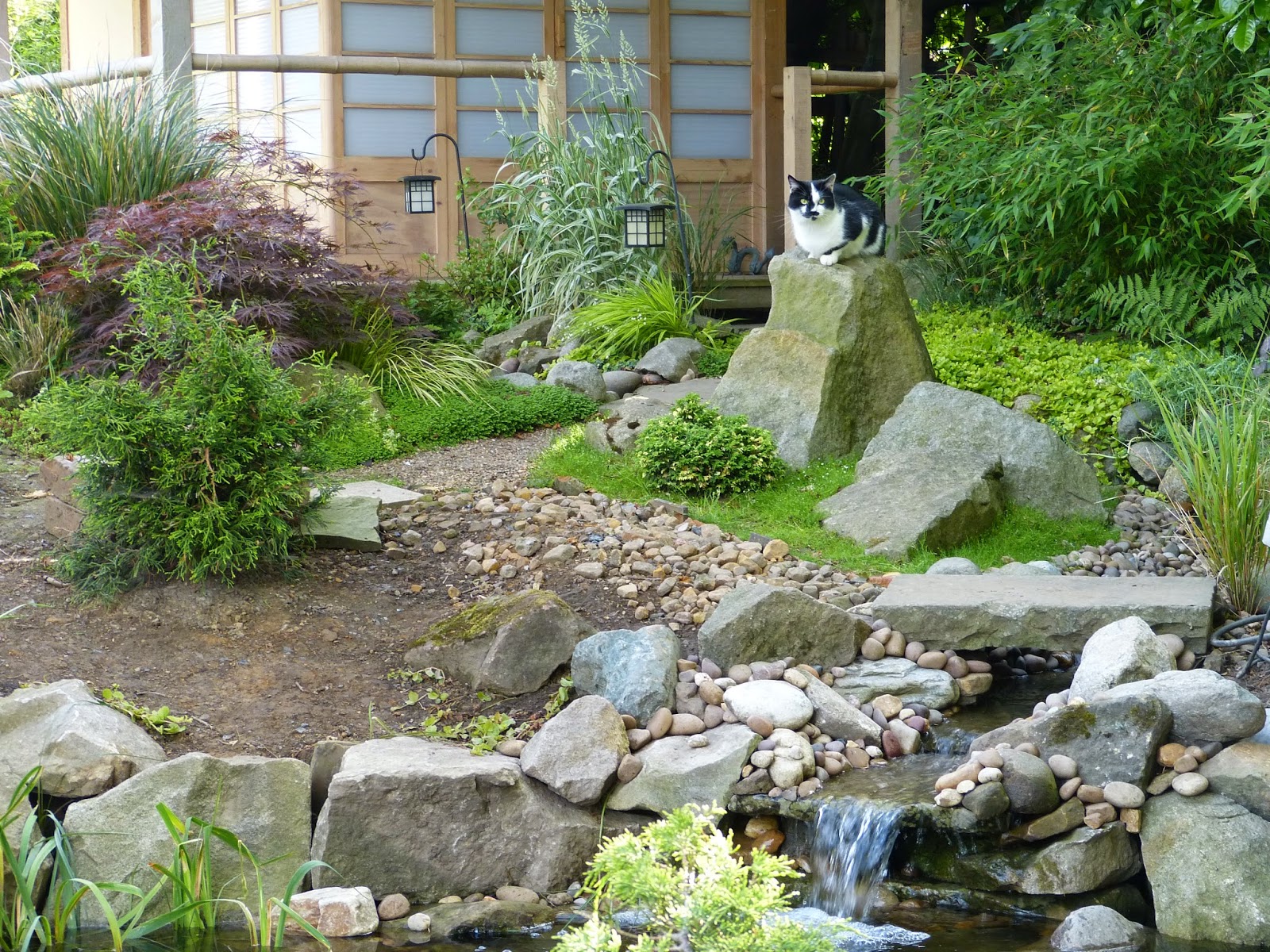 What a GREAT job!

You two are bloomin' amazing, that's what you are :} Lovely, lovely post (wish you did more of them) and outstanding looking pond/stream/tea house and cat!

Perhaps we should get Mr Clutter and Mrs AnotherBloodyEyesore to start a new Neighbourhood Association - but "Miserable G*ts With Nothing Better To Do" just doesn't make a good acronym.

You planning on venturing north this summer? The arrival of Daisy somewhat complicates any travel plans I might have been considering ...

It's looking wonderful; the path is very nice! Although as you say, you suspect the gravel may end up at the bottom. It's something to think about at least, but for now I think I'd be happy to just enjoy it, and see how things go.

Unbelievable what you tackle! How inspiring! Well done! Can't think of a film but guessing it might have something to do with the kitty? xoox

What an amazing pond...sigh. It's gorgeous and beautiful, and zen like...I hope that you submit photos to magazines, I bet they would like to do a feature on it.

Wow - that's looking so good. I mean your entire garden looks amazing anyway, but the pond just frames it nicely.

I really do mean to do more posts Bilbo m'dear, but somehow life keeps getting in the way ...probably because I know full well how 'wordy' I get once I start a post - regardless of how short I intend it to be!
Doesn't Daisy 'do' long car journeys?
If not then we'll have to venture north again - it's been too long!

Hi Liz. The gravel seems to be sliding to the edges of the path rather than down the slope at the moment, so it's not too bad....I am really enjoying having a proper path though, so I'll take your advice and just see how it goes :-)

Hi Kathryn - and thank you. I suspect that we are daft rather than inspirational, but thank you anyway! ;-)
The film is Crouching Tiger, Hidden Dragon ...but you have to spot the dragon in the photo!

Thank you LauraLou - it's taken some doing, but I am really pleased with it. It's so hard to make an artificial pond look 'naturalised'!

I was going to say "A River Runs Through It," but I read your comments and found that I was wrong. LOL. Liz, this is just beautiful. Gorgeous. Fabulous. I would LOVE having something like this in my backyard! Good work, ALL of you!! And Last-Born has an important job there, too. ENJOYING! ;-)

A river does indeed run through it Kylee....well, a small stream anyway!
So glad you like it - give me board and lodgings for a couple of months and I'll pop over and start one off for you! ;-P

I wanted a pond, but after reading that I've decided against it!