.....in a small market town in Derbyshire, some fool decided that building a Japanese garden and tea house would be a good plan and probably wouldn't take all that long. That fool was me and eight years later, it's still not finished! However, we have just about finished renovating our 1920's house, learnt how to grow fruit and vegetables, made a lot of other changes in the garden and had a life with our gorgeous daughters, so all is not lost!

I'm not known as a speedy blogger and many of my posts refer back to stuff we did ages ago - ok, MOST of my posts are about about stuff we did ages ago...life gets in the way of blogging at times! Today's post is no exception. Today we're going back 4 years to the finishing off of the top pond and the tea house courtyard....if I can find the right photos after all this time!

We'll start with Himself putting my granite lantern into the pond....and making it work, obviously!
He put a couple of large flatish stones on the pond shelf before drilling a hole for the wire in another stone and resting that on top. The water looks skanky because we hadn't got the filter working at that time - the water is lovely and clear now. 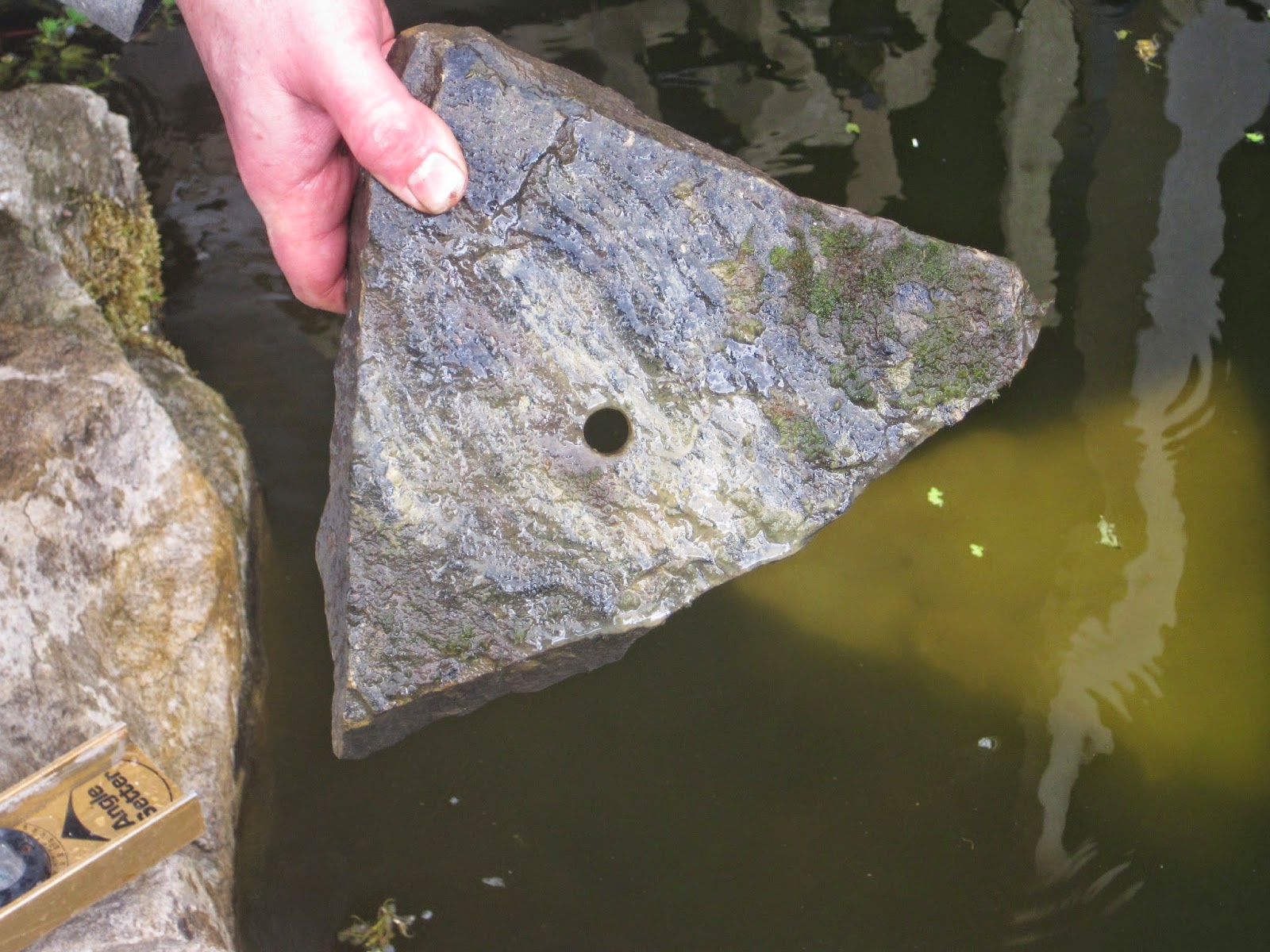 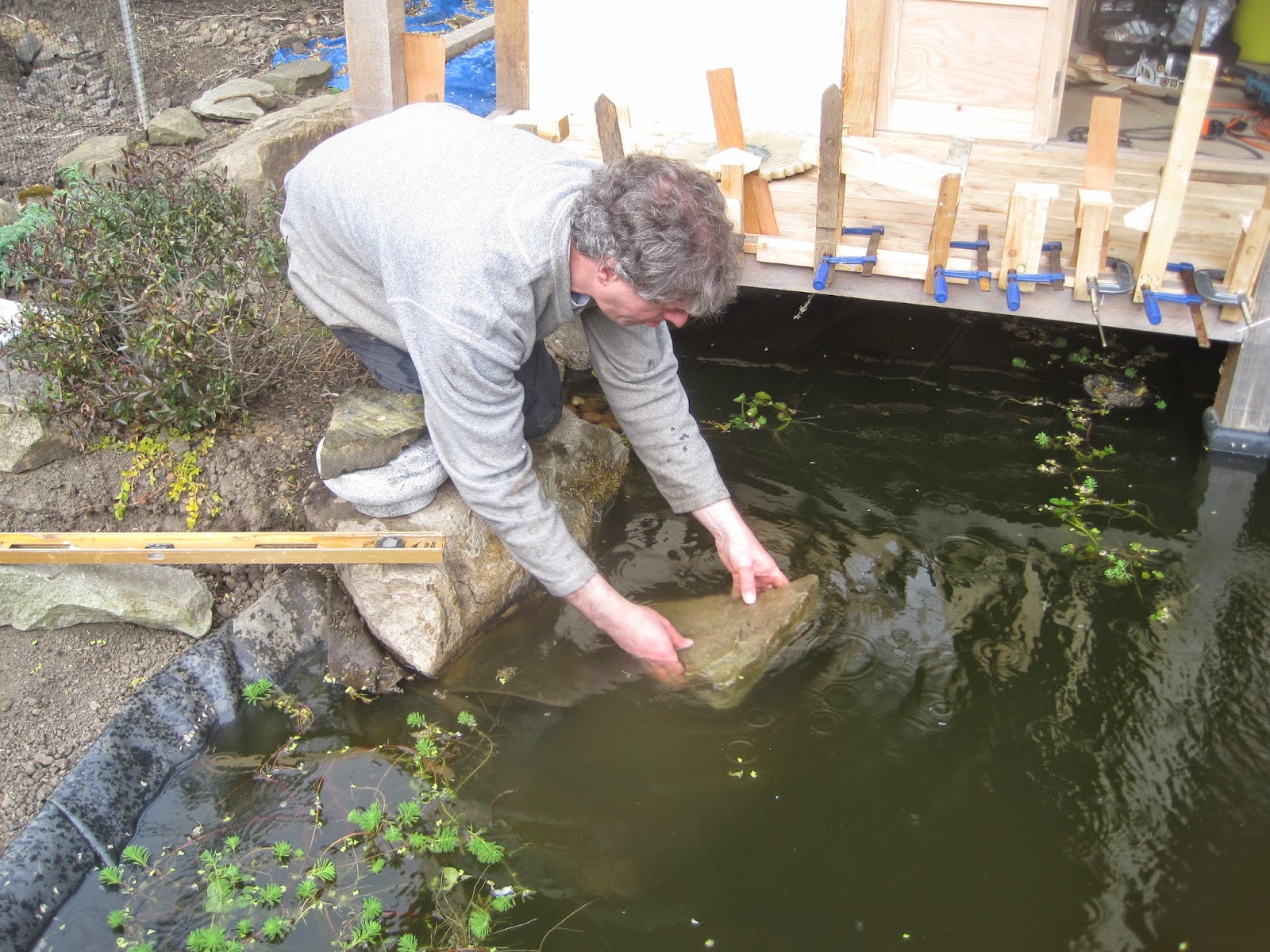 The granite lantern came in 4 parts - because it was chuffing 'eavy and couldn't possibly have been hoiked into place as one complete lantern. The base went on top of the drilled stone, 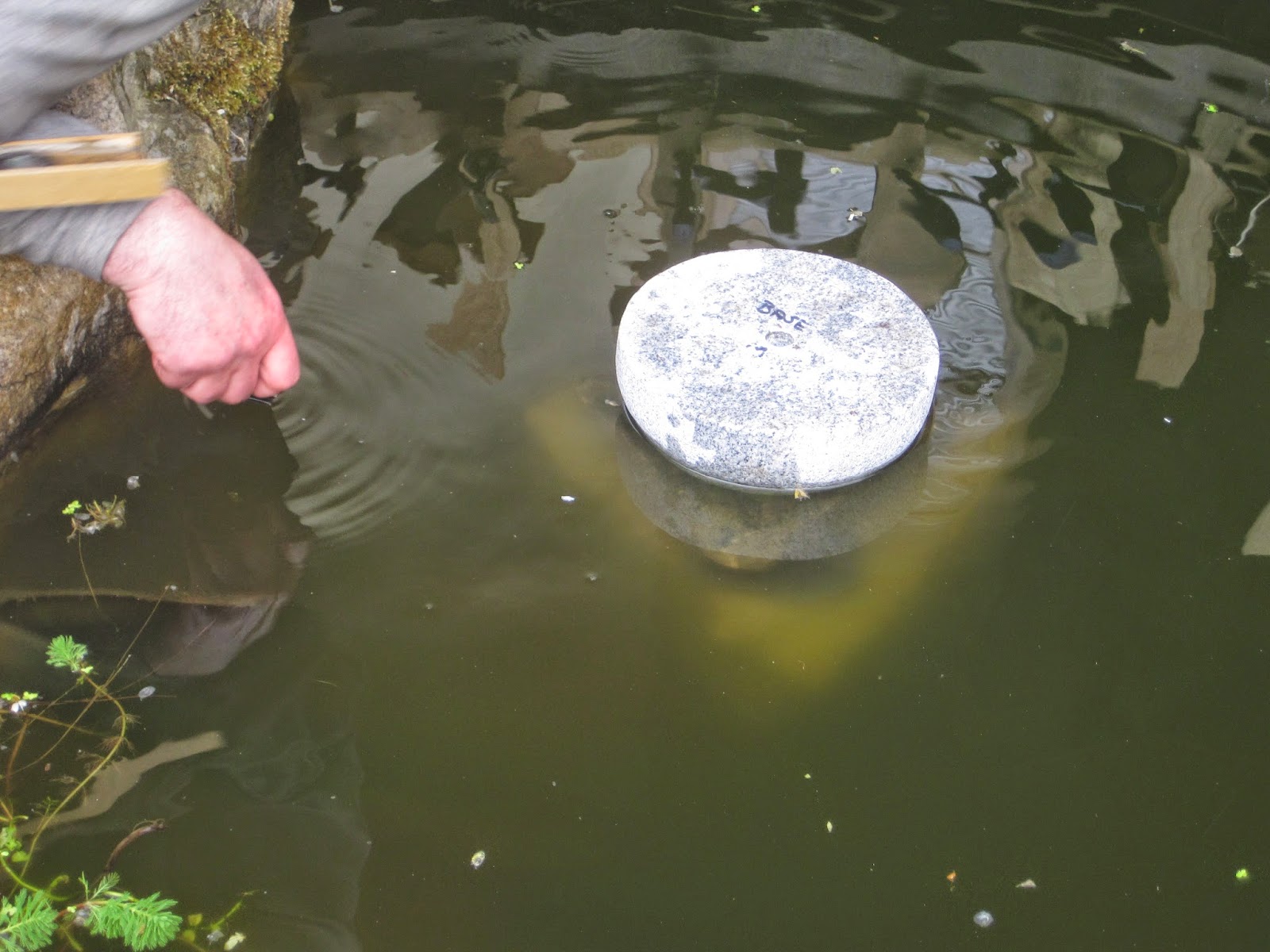 it was of course perfectly level! 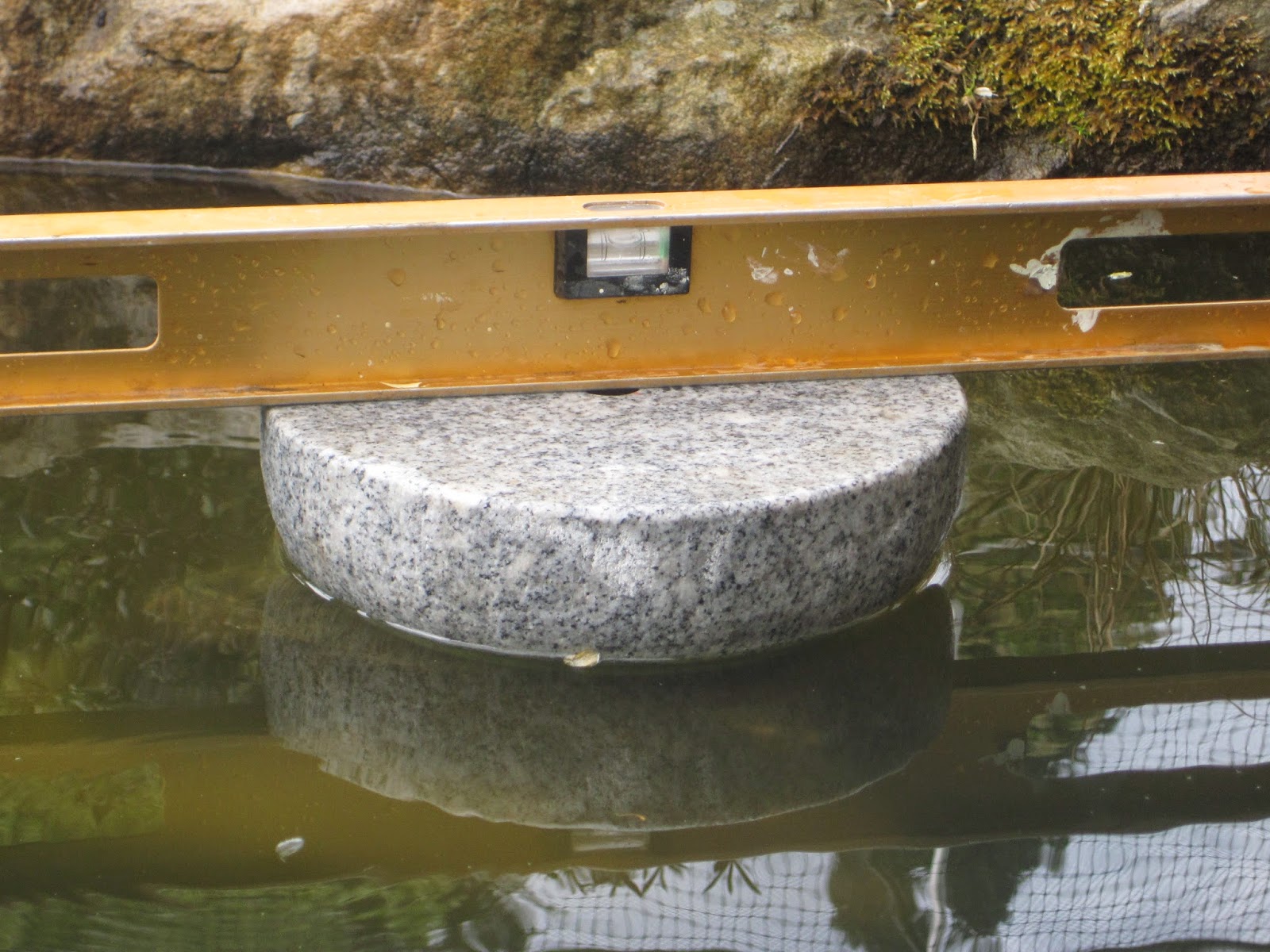 The light was then threaded through the hole and the wire was carefully placed in the small gap between the 2 base stones.
The clamps and stuff on the edge of the tea house veranda were because Himself had glued some mahogany pieces onto the edges to completely encase the softwood and protect it from the weather. 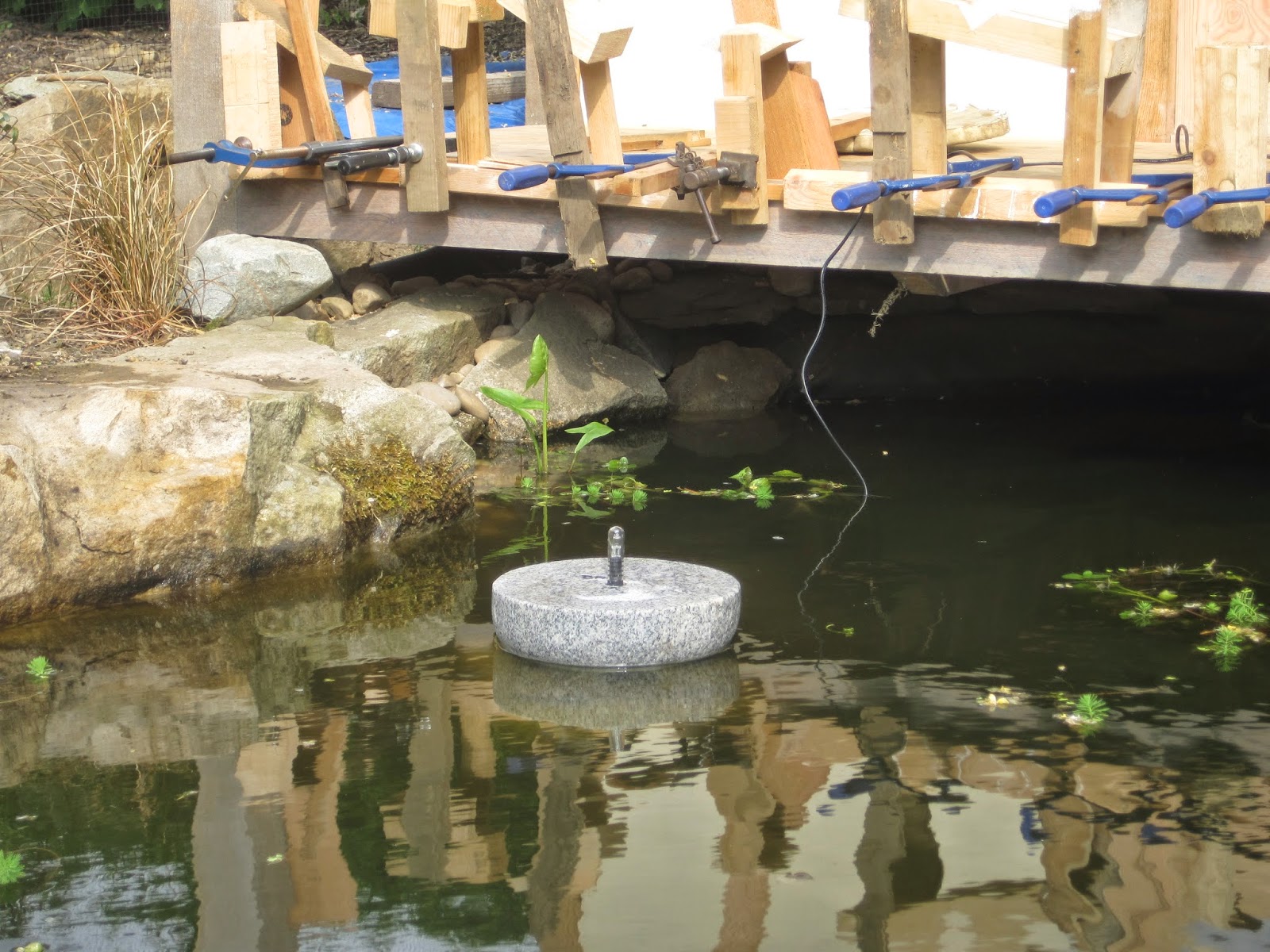 The second piece of the lantern went on next. In Japan, the windows are open  to the elements, but our elements are a bit too inclement for that, so I used pieces of plastic milk containers to provide protection - an idea I borrowed from Purelands, a Japanese Garden and Meditation Centre near Newark which is well worth a visit if you're in the area.
The mountain of soil inside the fruit cage will get explained in another post very soon! 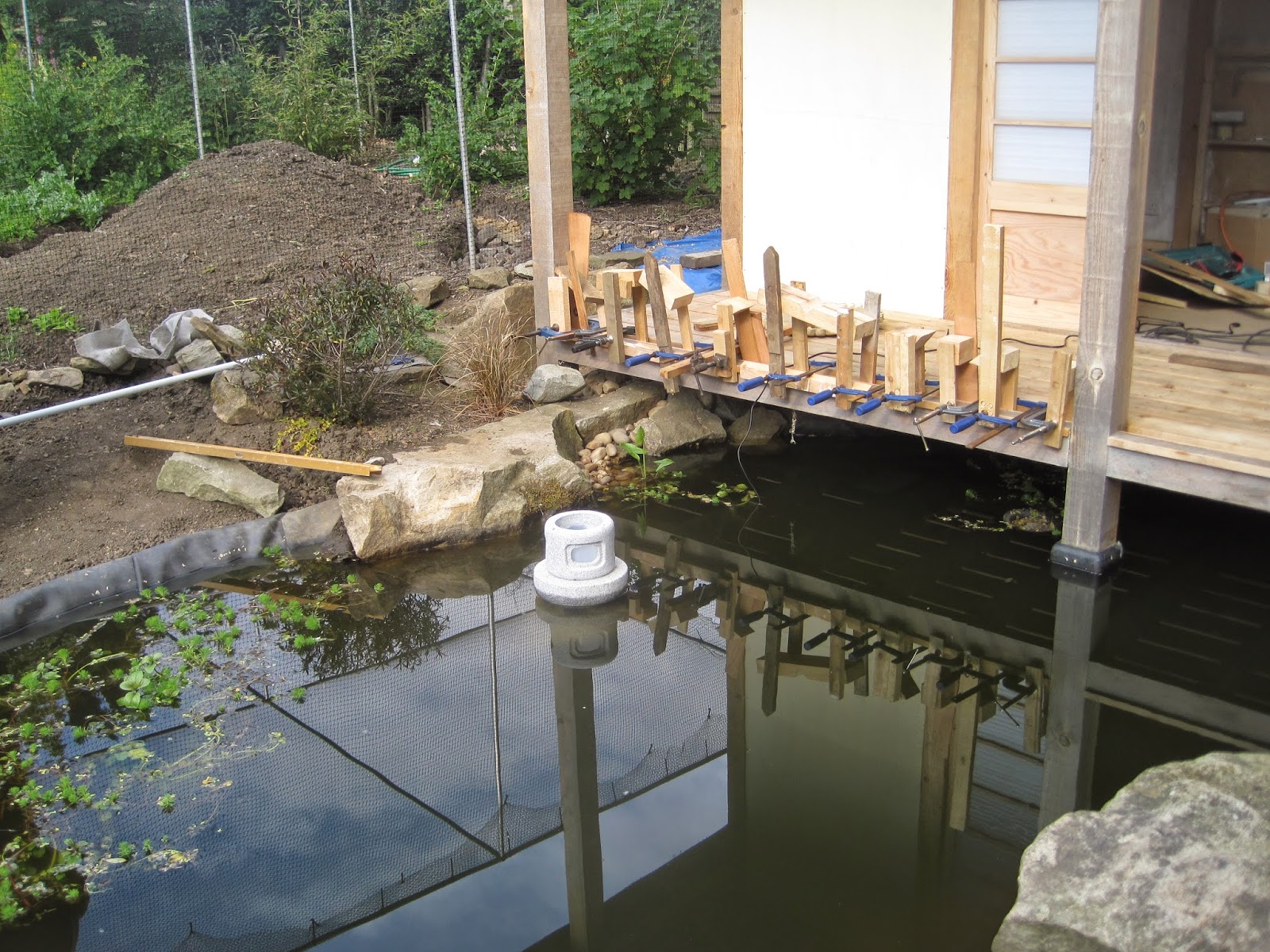 Himself making sure he'd not dribbled glue onto the grantite whilst sticking the third piece on! 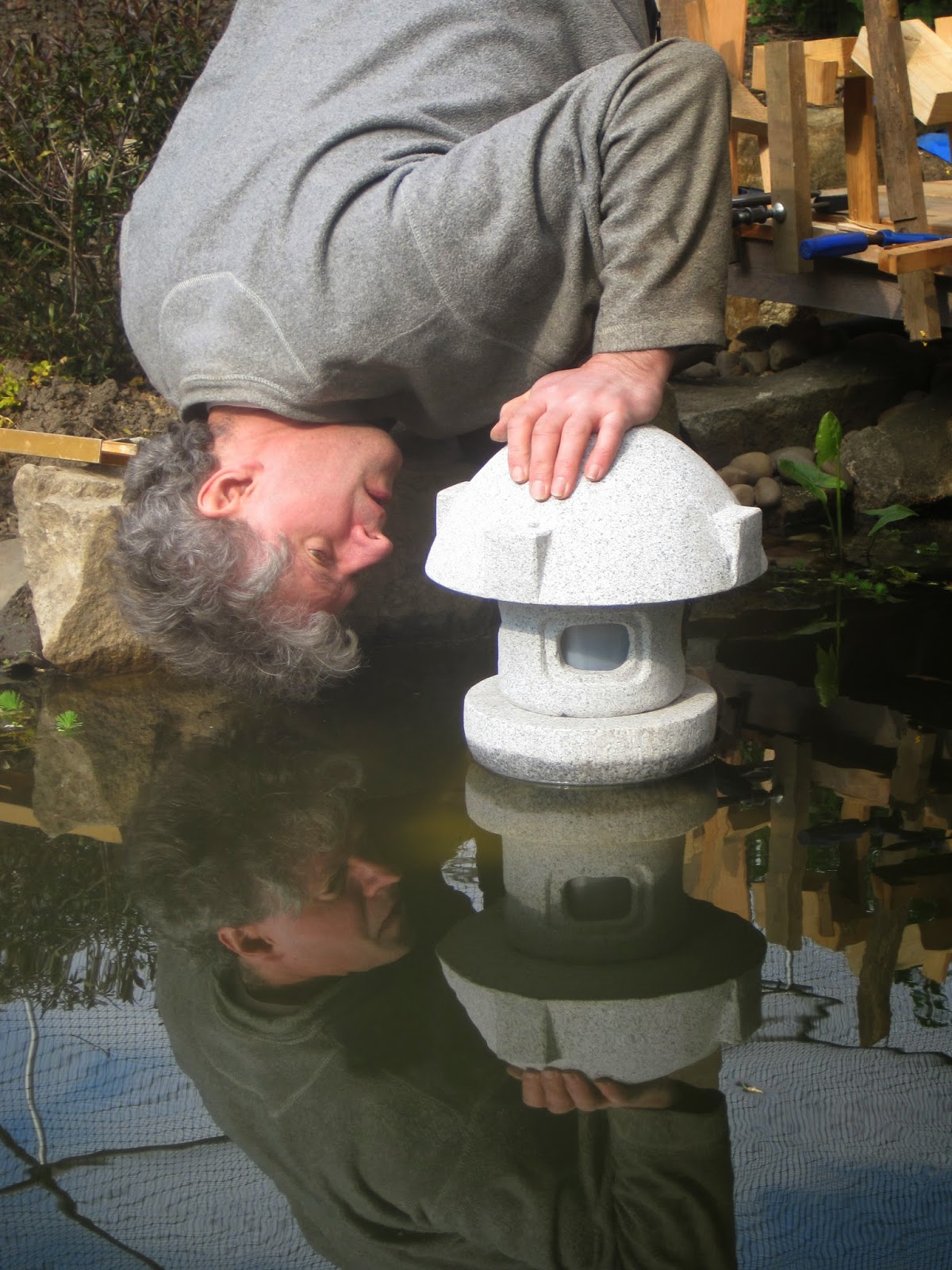 The fourth piece finally in place. 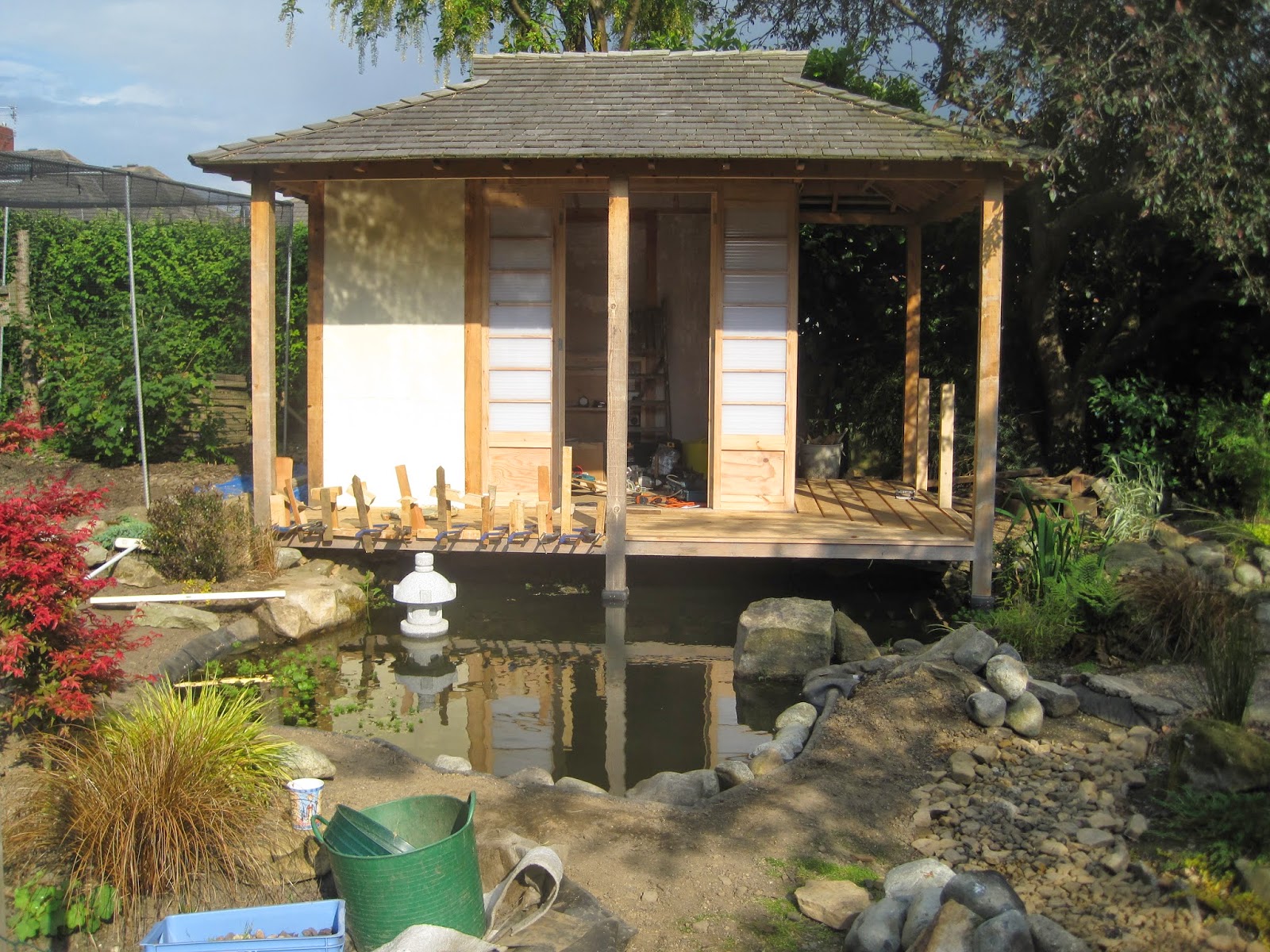 Once Himself had done the heavy work, I could move in and do the arty-farty bit! I covered the shelf  and the surrounding edges with more small rocks, stones and pebbles. If there is one thing I can't abide with home-made ponds it's being able to see the liner - you can't see any liner anywhere around my ponds.......except if you lie on your tummy on the veranda and peer back underneath to the bit I can't get to! :-P 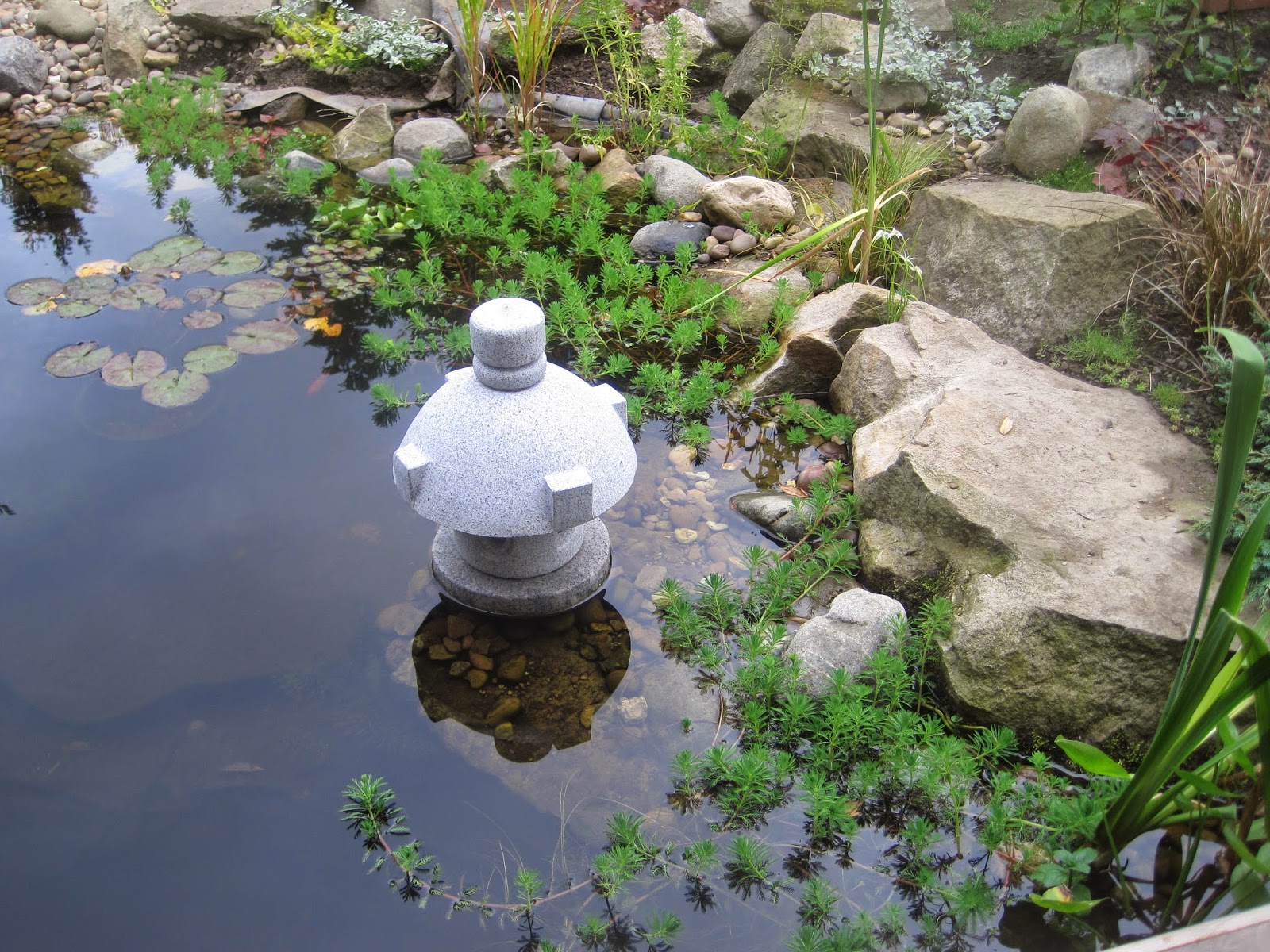 A goodly chunk of the pond shelf and edge sorted and the waterlillies in place in the deep bit of the pond.

Himself's next task (it's begining to sound like 'The Twelve Labours of Hercules' here!) was to make me a Tsukubai - a stone water basin. Traditionally they are smoother on the outside, often rounded, but hey - we had lots of big rocks lying around the yard....!
First he drilled a load of holes, 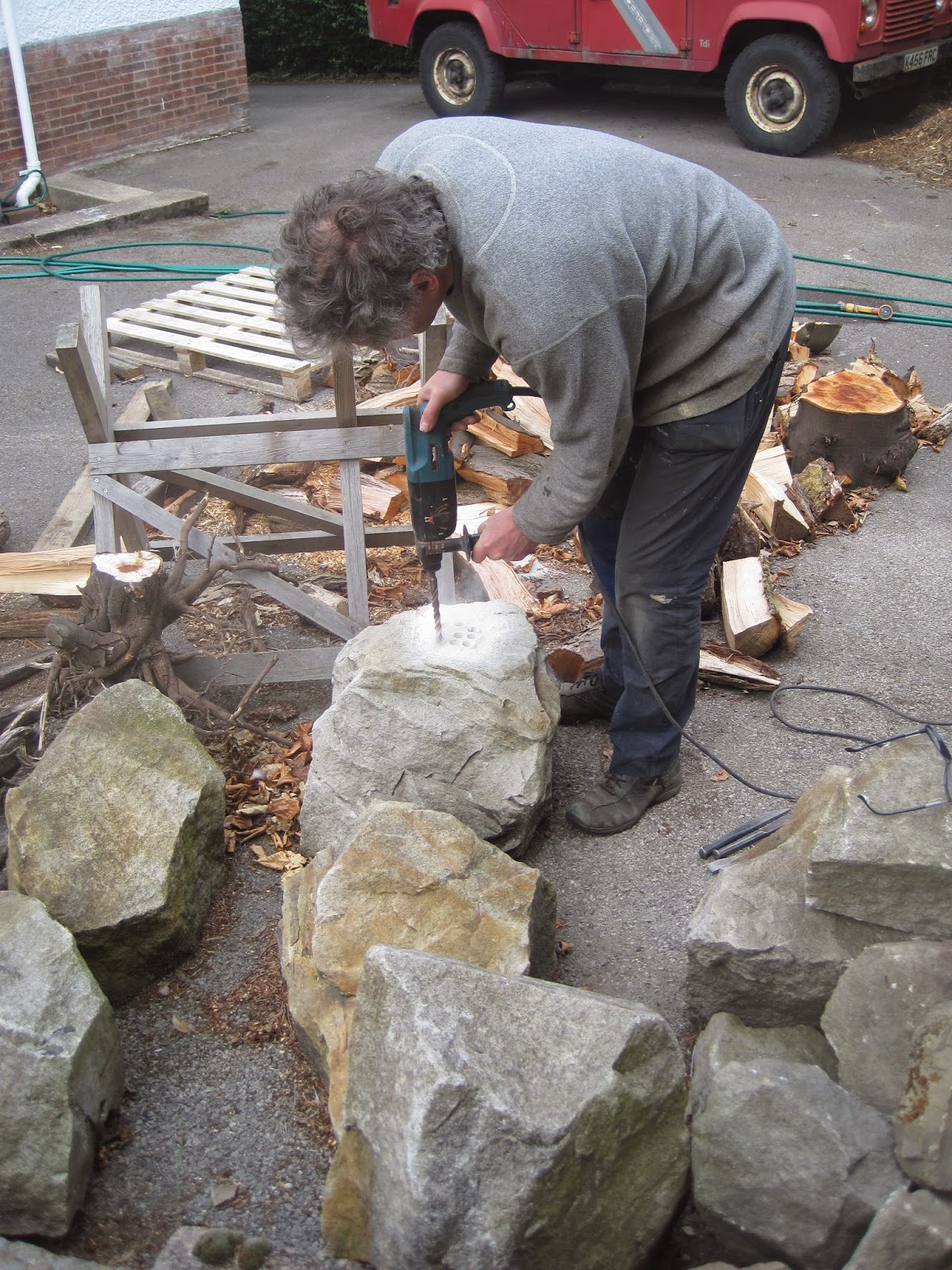 before chiseling the stone out 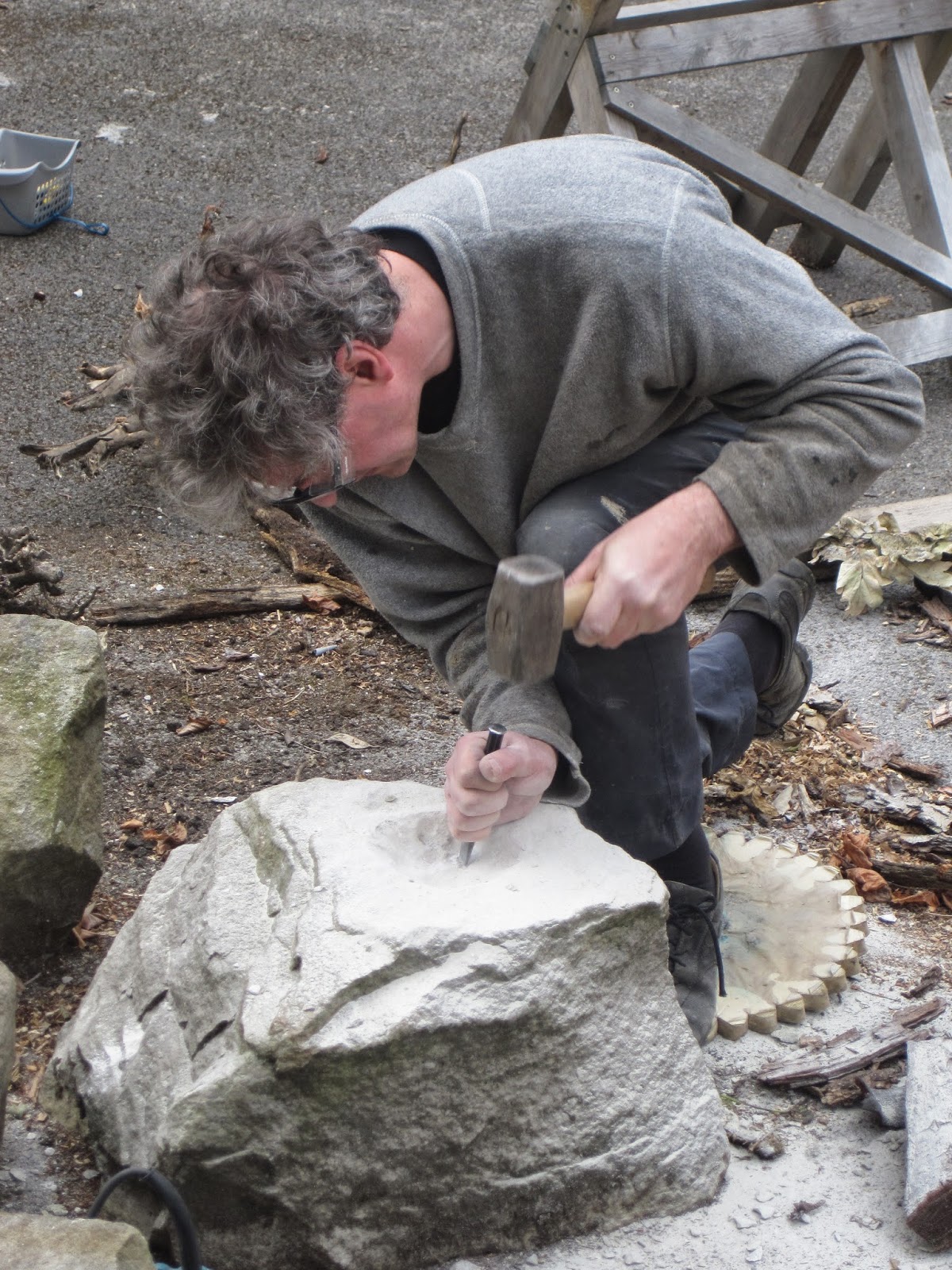 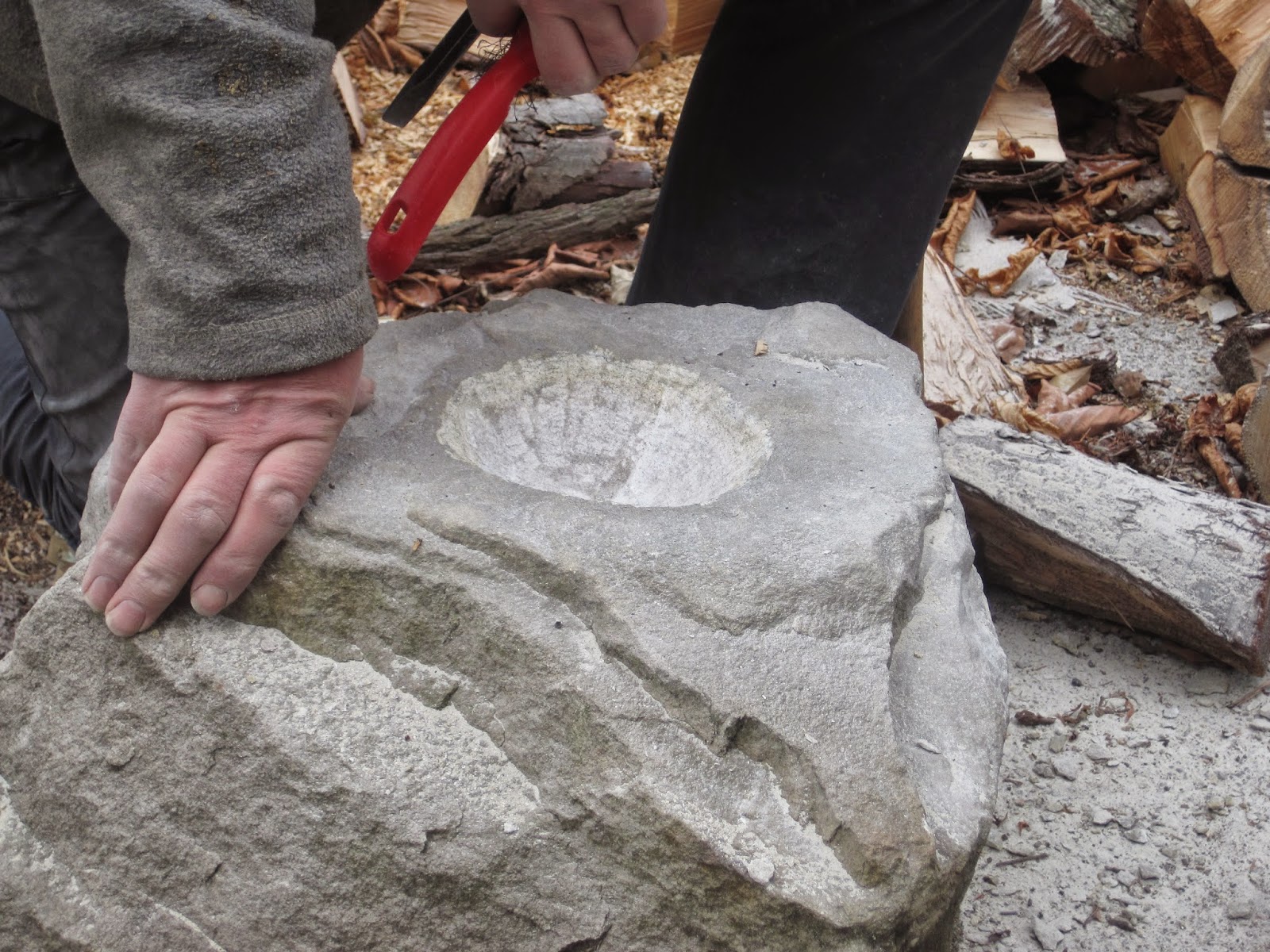 The only slight problem was that he'd done the job down on the yard and the tea house courtyard was about 100 yards up the garden! Everywhere is UP in our garden, including the stone, which was levered up 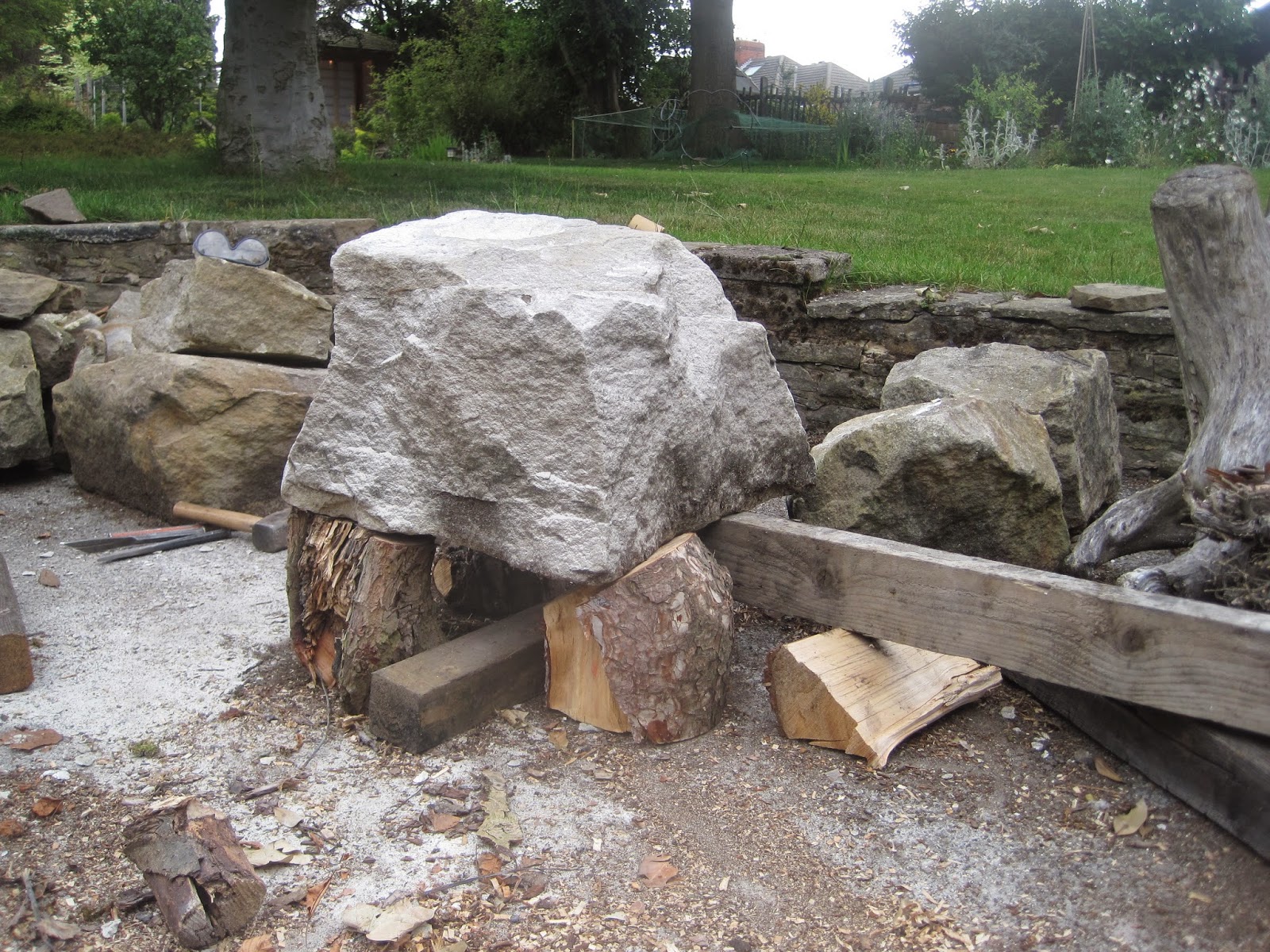 and placed in our long-suffering wheelbarrow for Himself, Last-Born and the Drummer Boy to take up the garden. I can't remember which bit of me I'd injured at that point or how, but I was on light duties and therefore exempt from rock hauling! 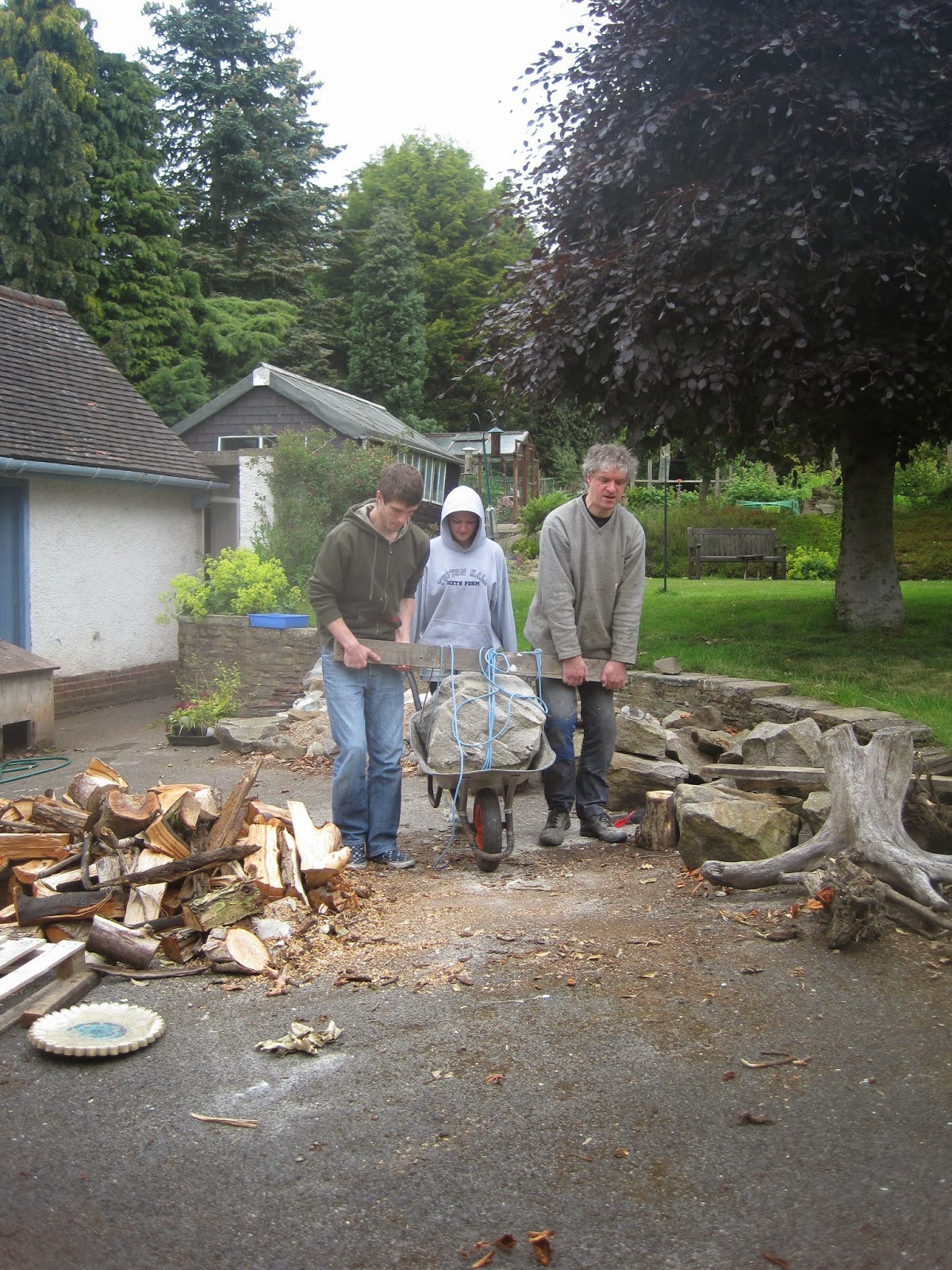 hence we got photos. 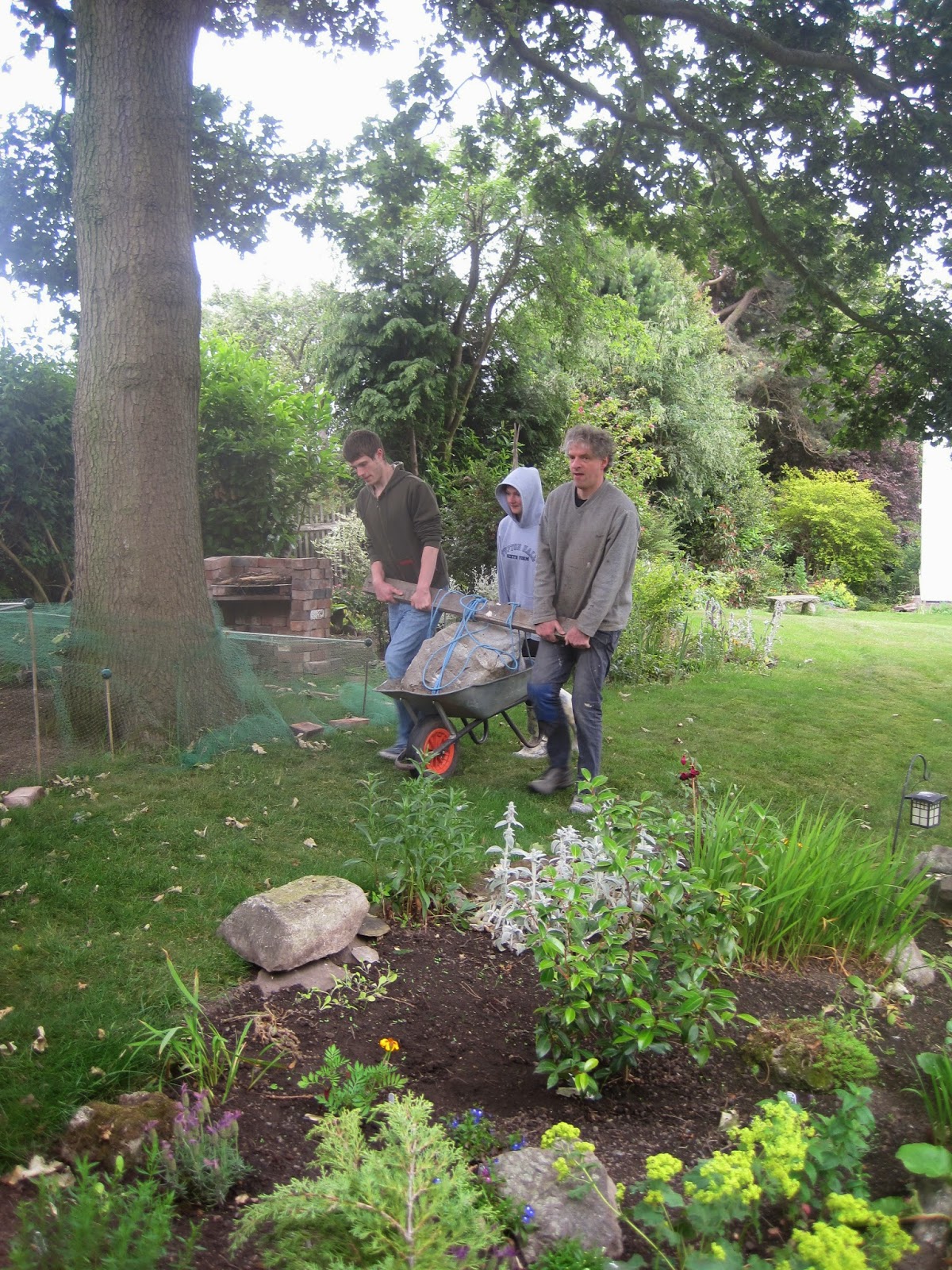 There are no photos of getting it into place because I was too busy bossing them around and choosing which face of the stone I wanted facing outwards to take any!

The Wonderful Pete had put the step stone in place the previous weekend (but can I 'eckerslike find those photos!) and I laid down the stepping stones - in Japanese gardens the stepping stones are always deliberately close together to make you slow down as you walk on them so that you have chance to take in your surroundings. 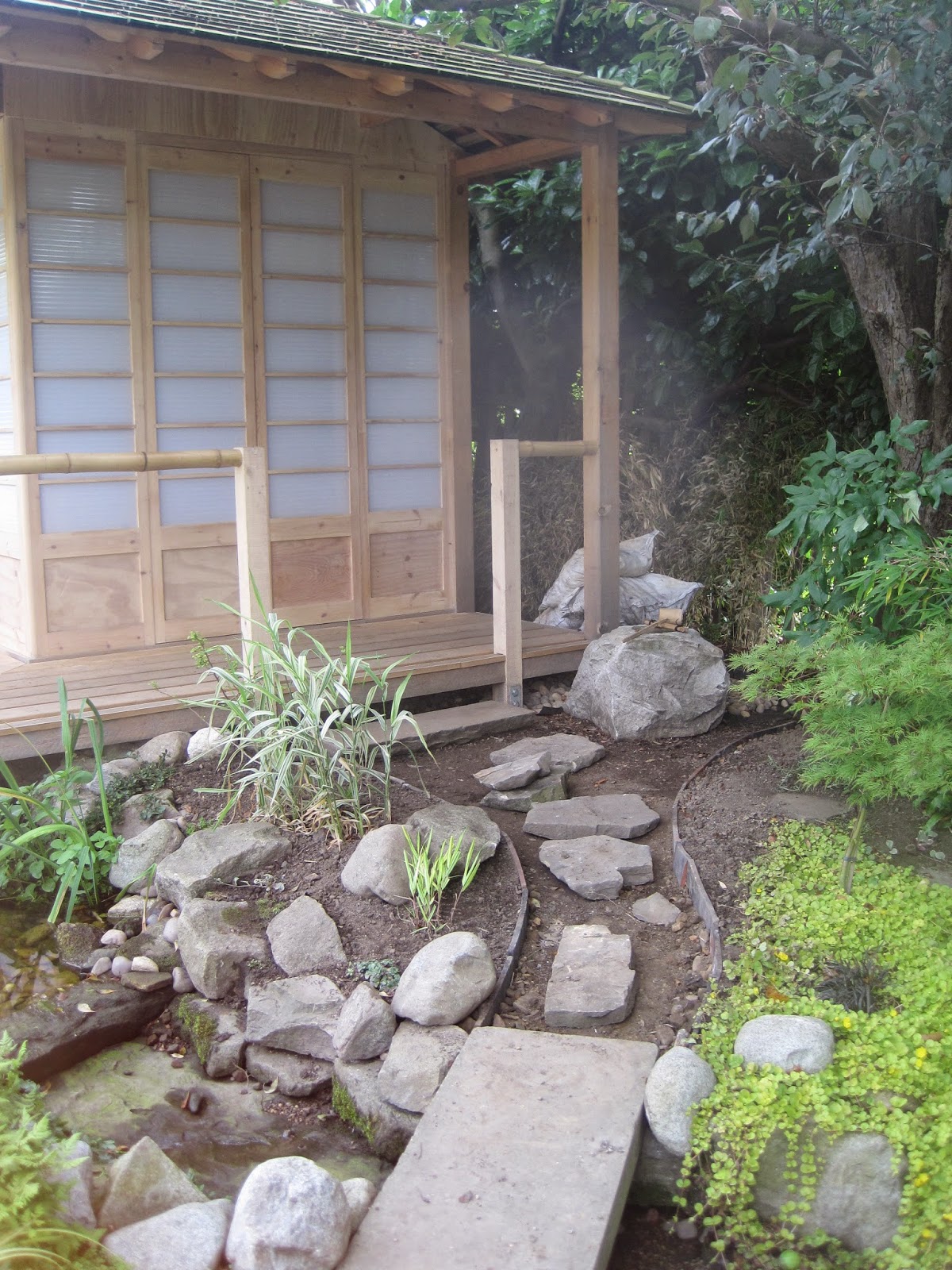 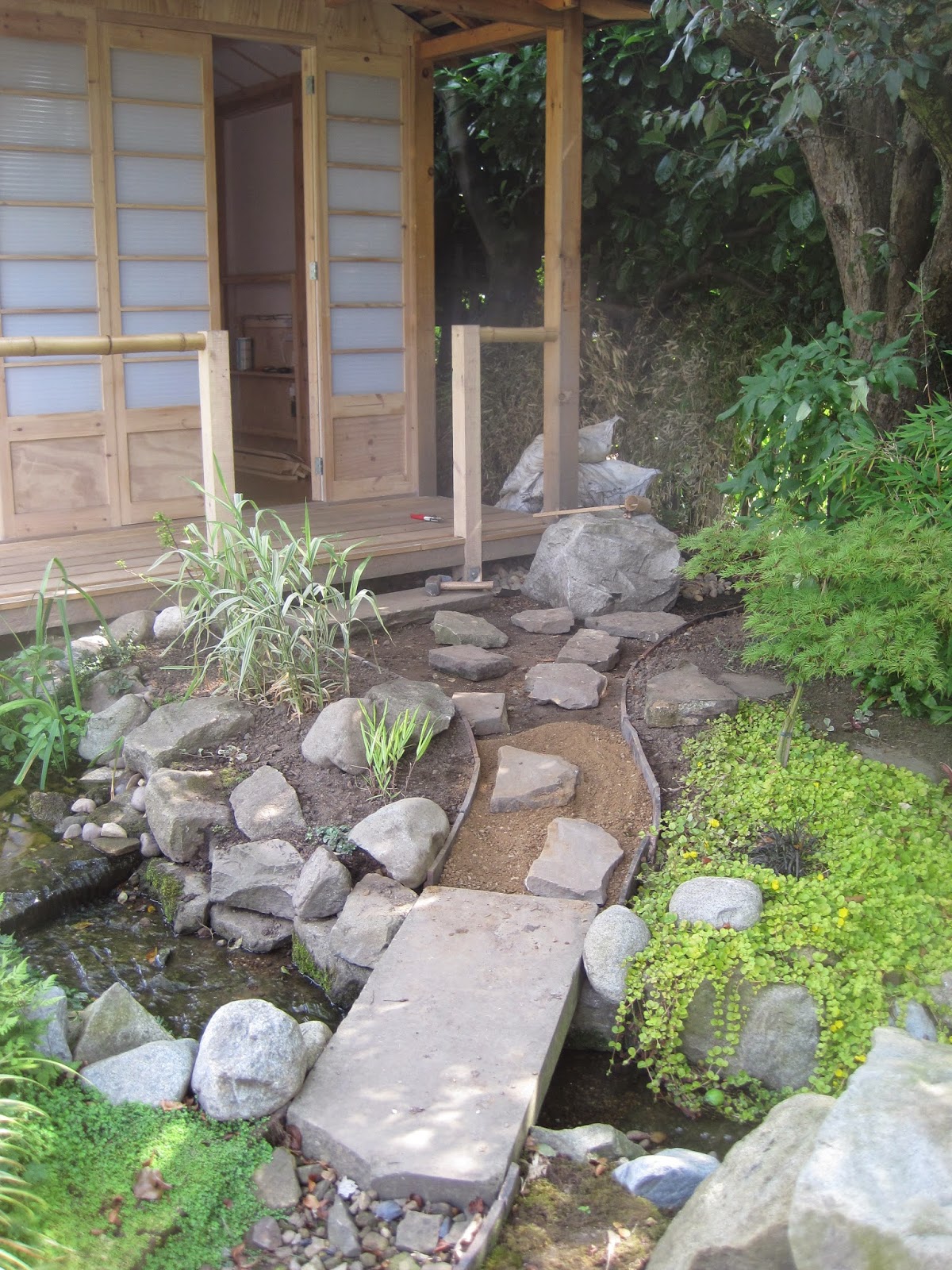 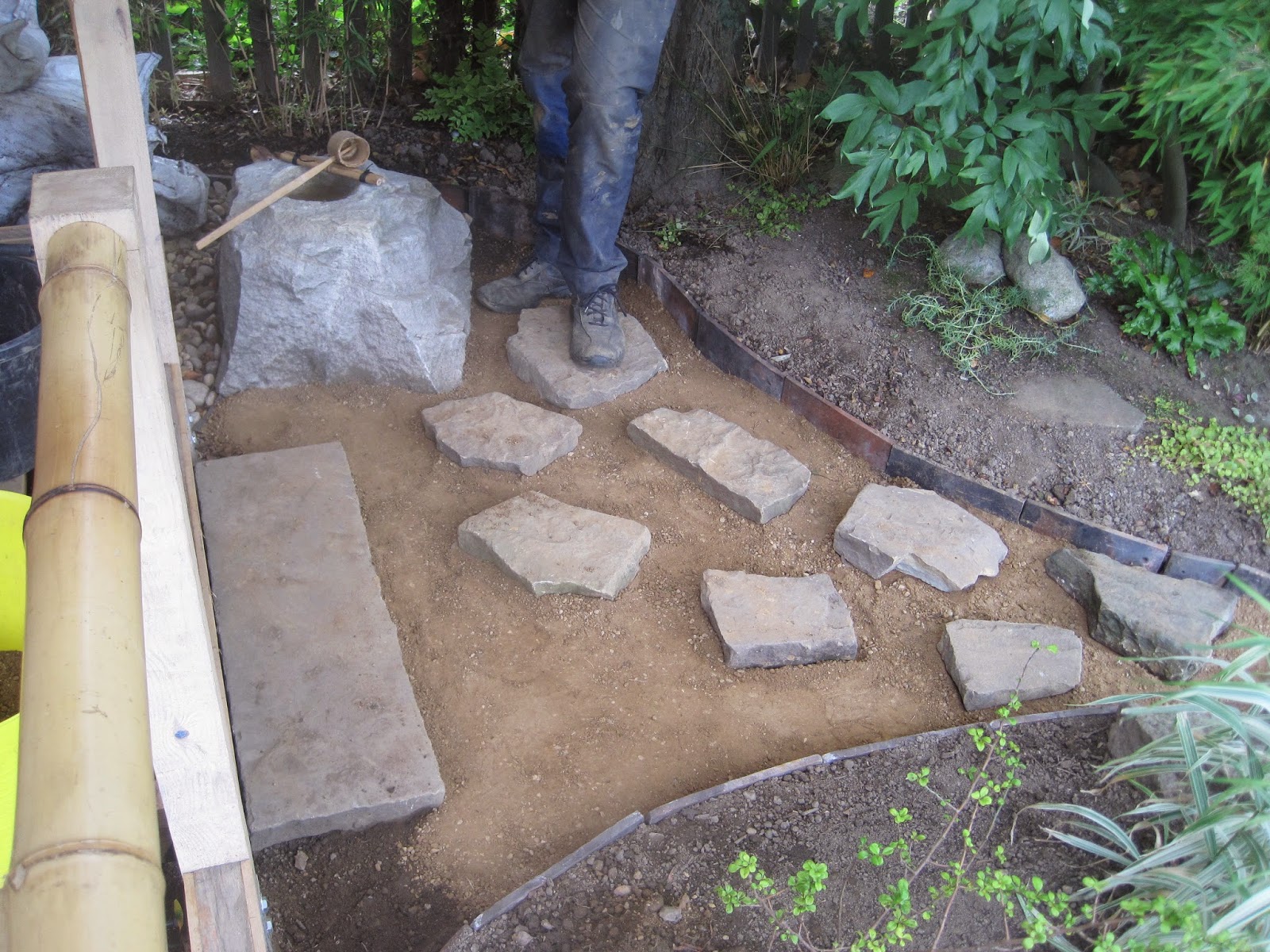 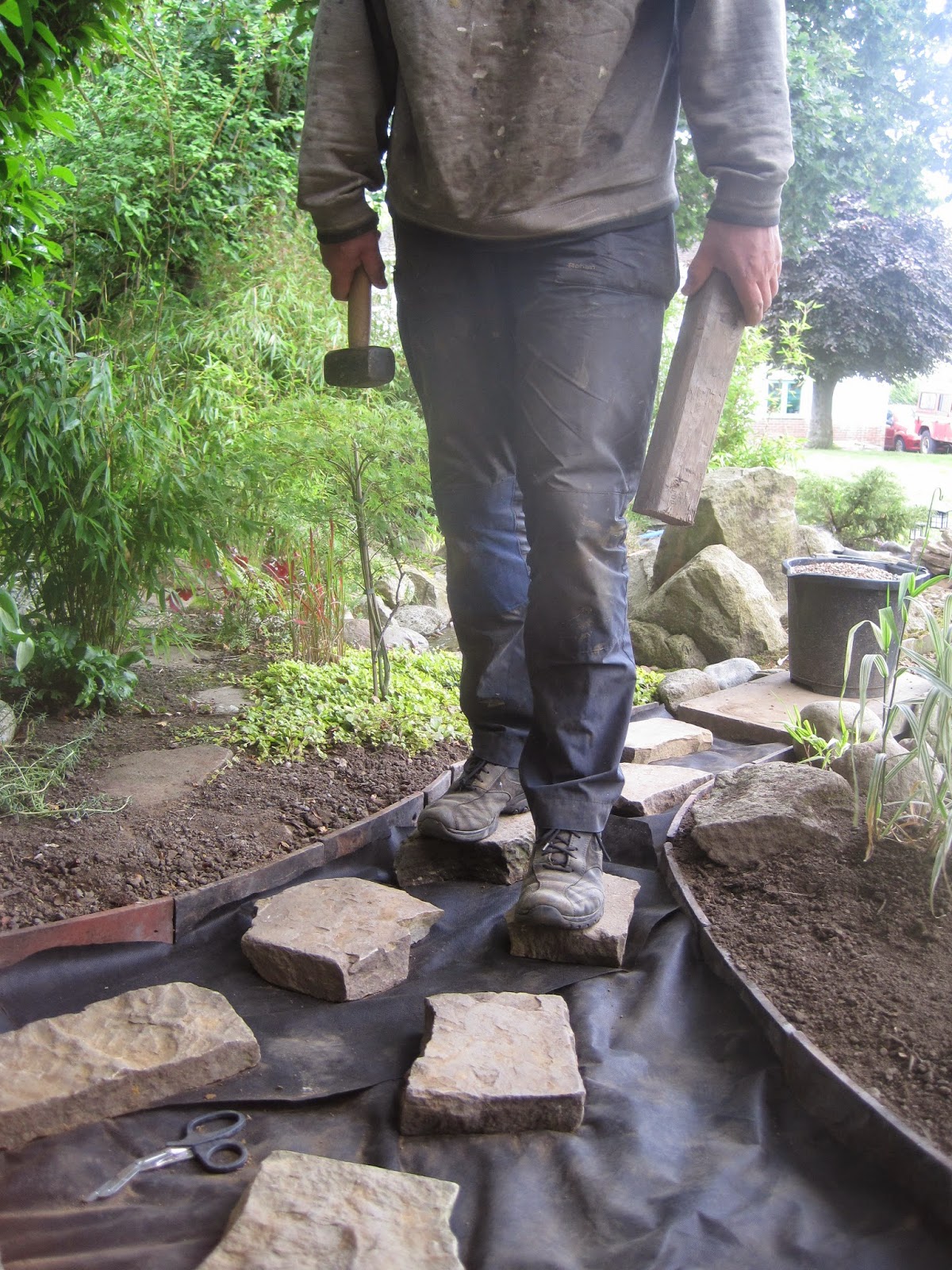 before I had the fun job of putting all the pebbles down in the courtyard - individually handpicked and carefully placed, obviously! 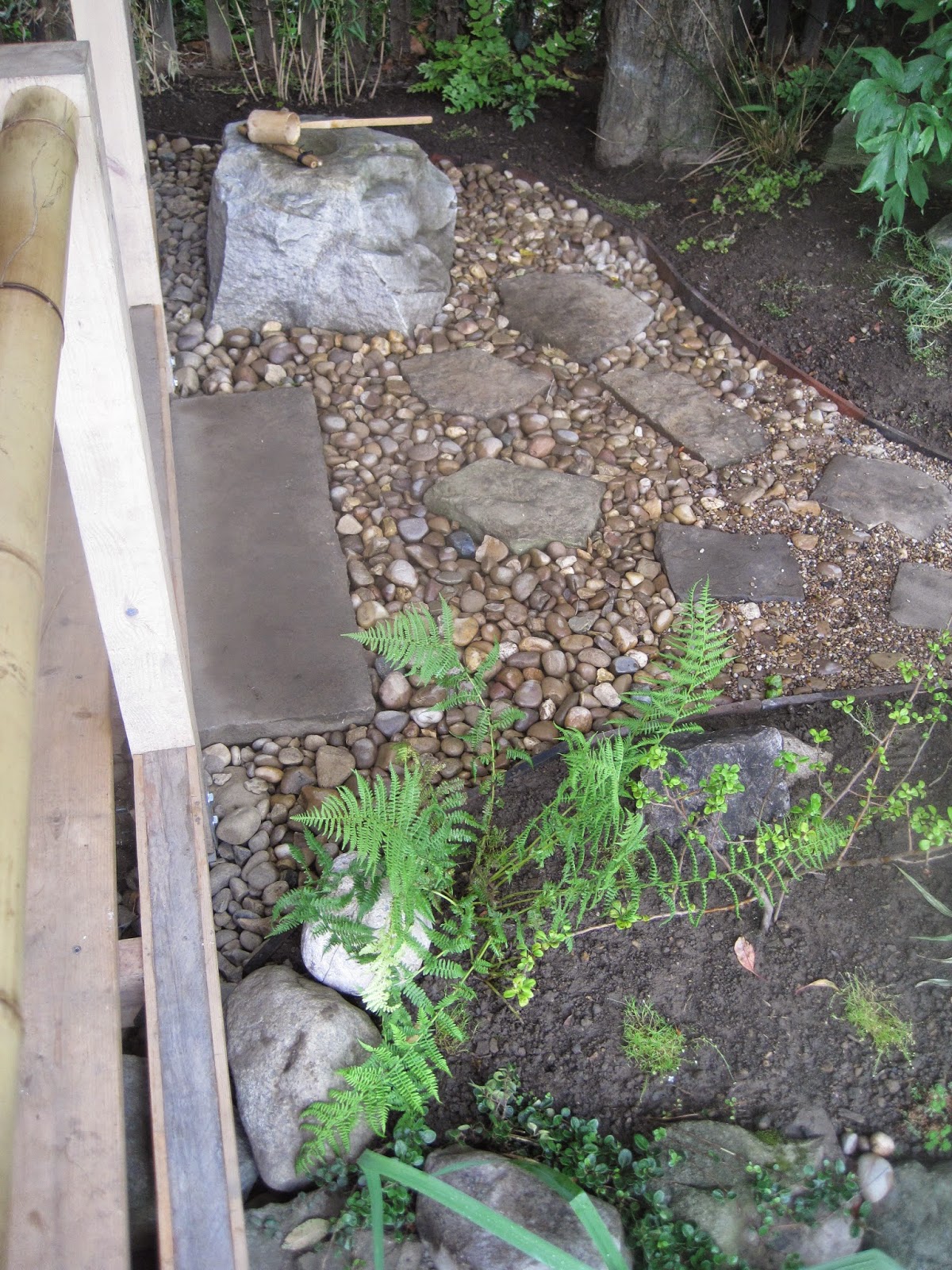 before putting pea gravel on the path from the bridge to the courtyard and blending in where they met. And so it has remained ever since!

To finish off, I've added in a few photos of how it looks now at 6.45pm on a grey and wet June day - when we've had stonking hot sunny weather for days, I know, I know - should have taken 'em yesterday!


There will one day be a rainchain from the roof to the basin to fill it with fresh rainwater. At the moment I use the ladle to fill it with pond water ...but I do have to be careful at this time of year as I have been known to accidentally ladle tadpoles in as well! 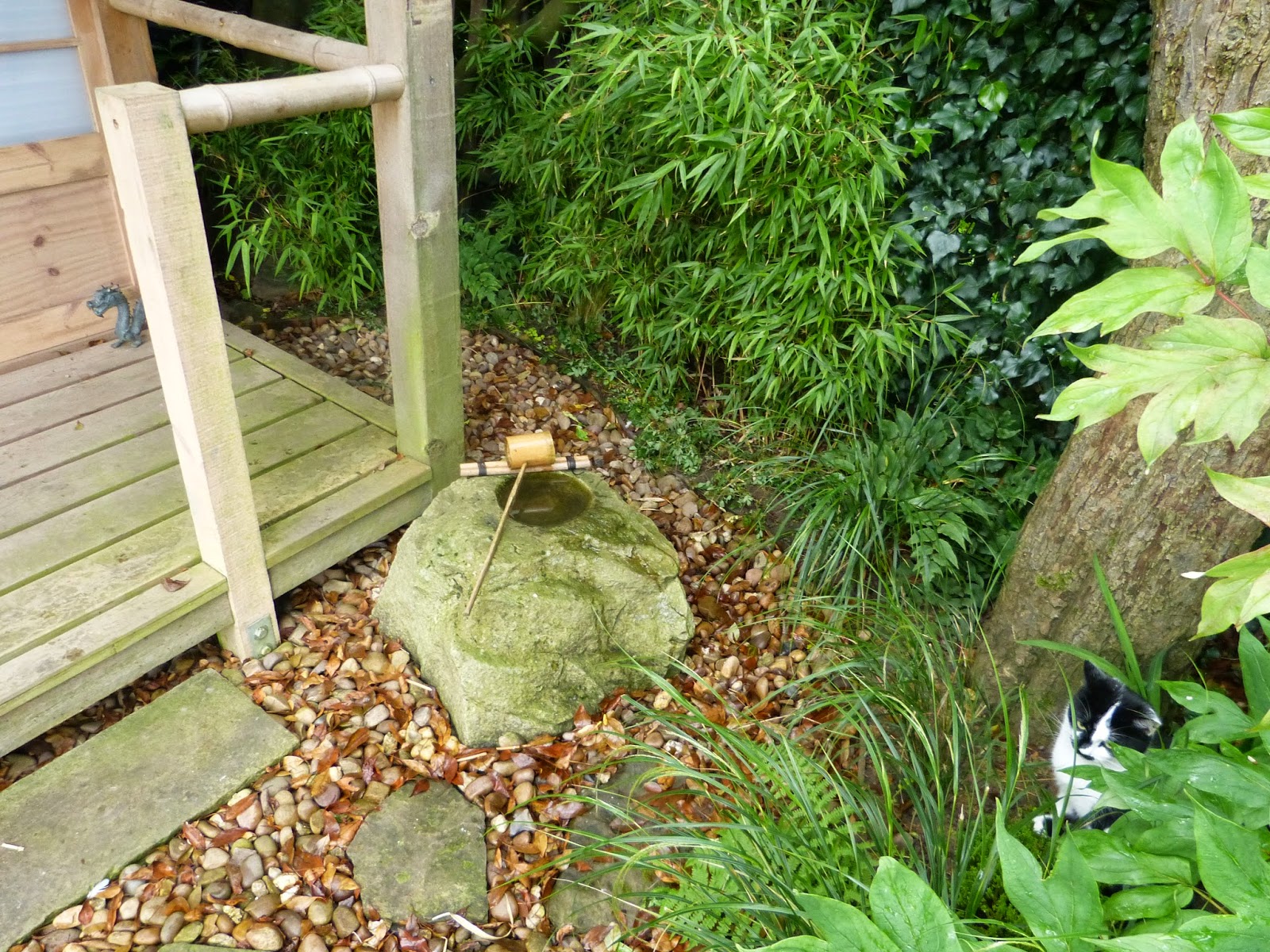 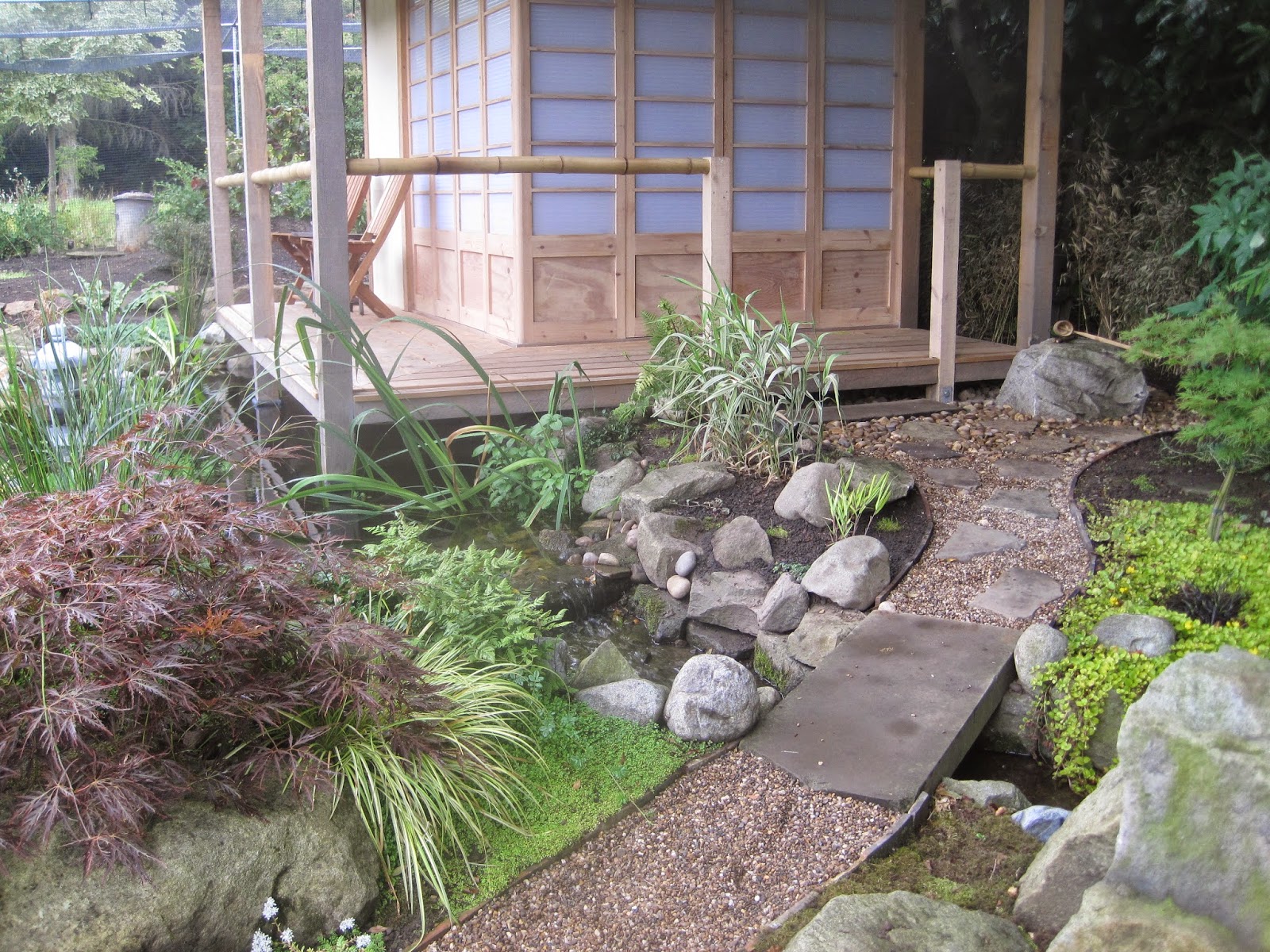 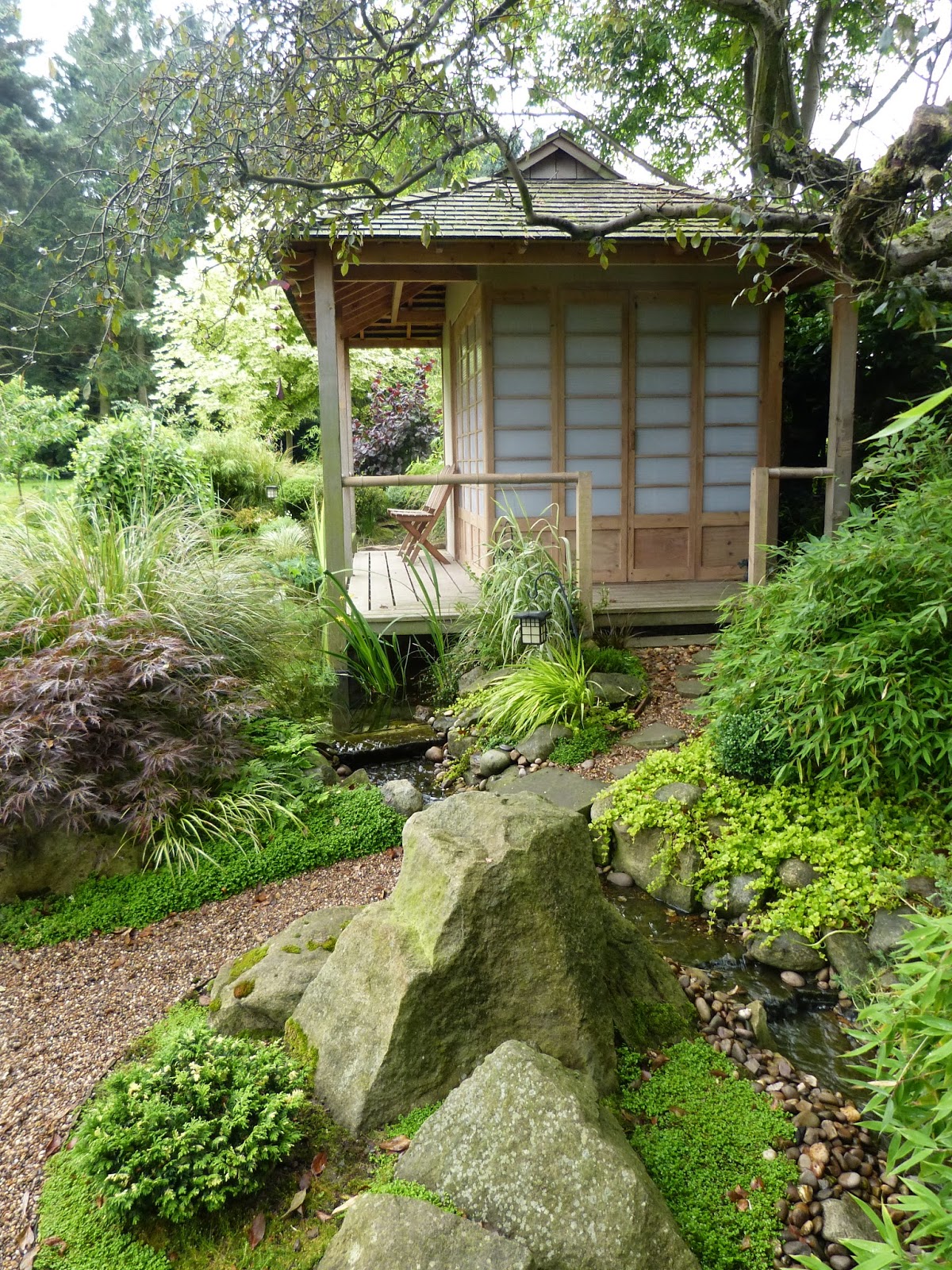 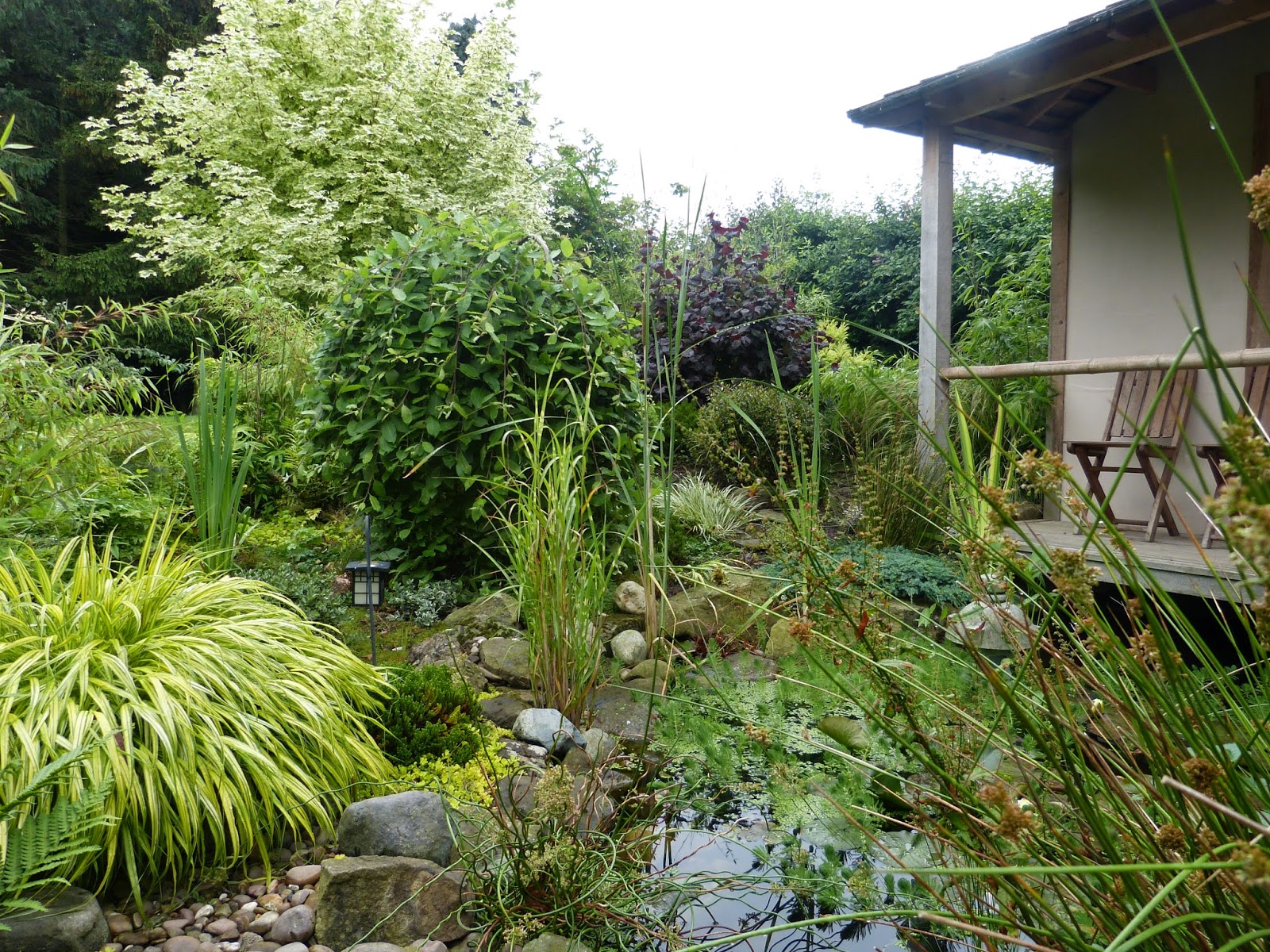 The granite lantern is a bit greener than it really ought to be ;-P 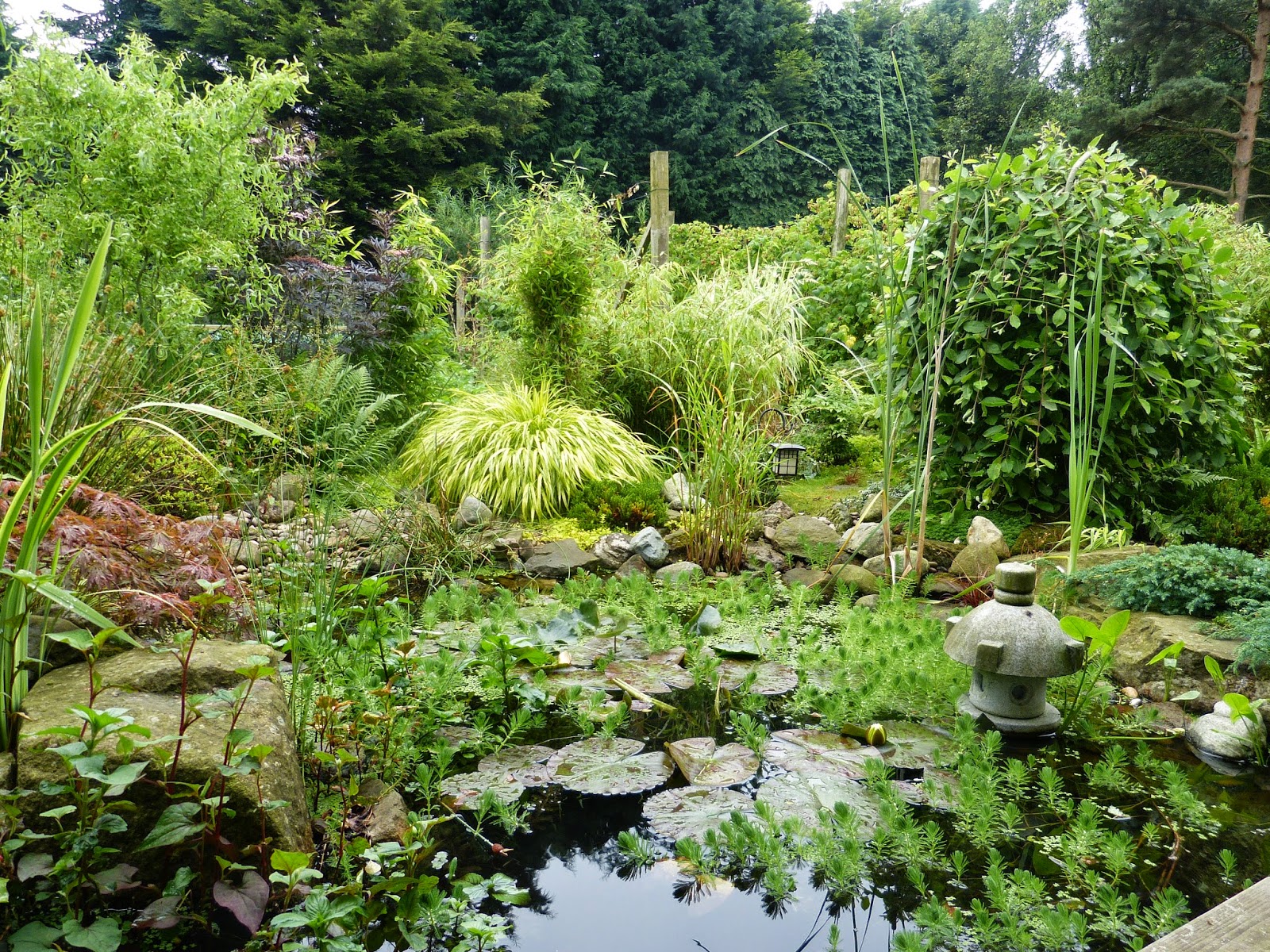 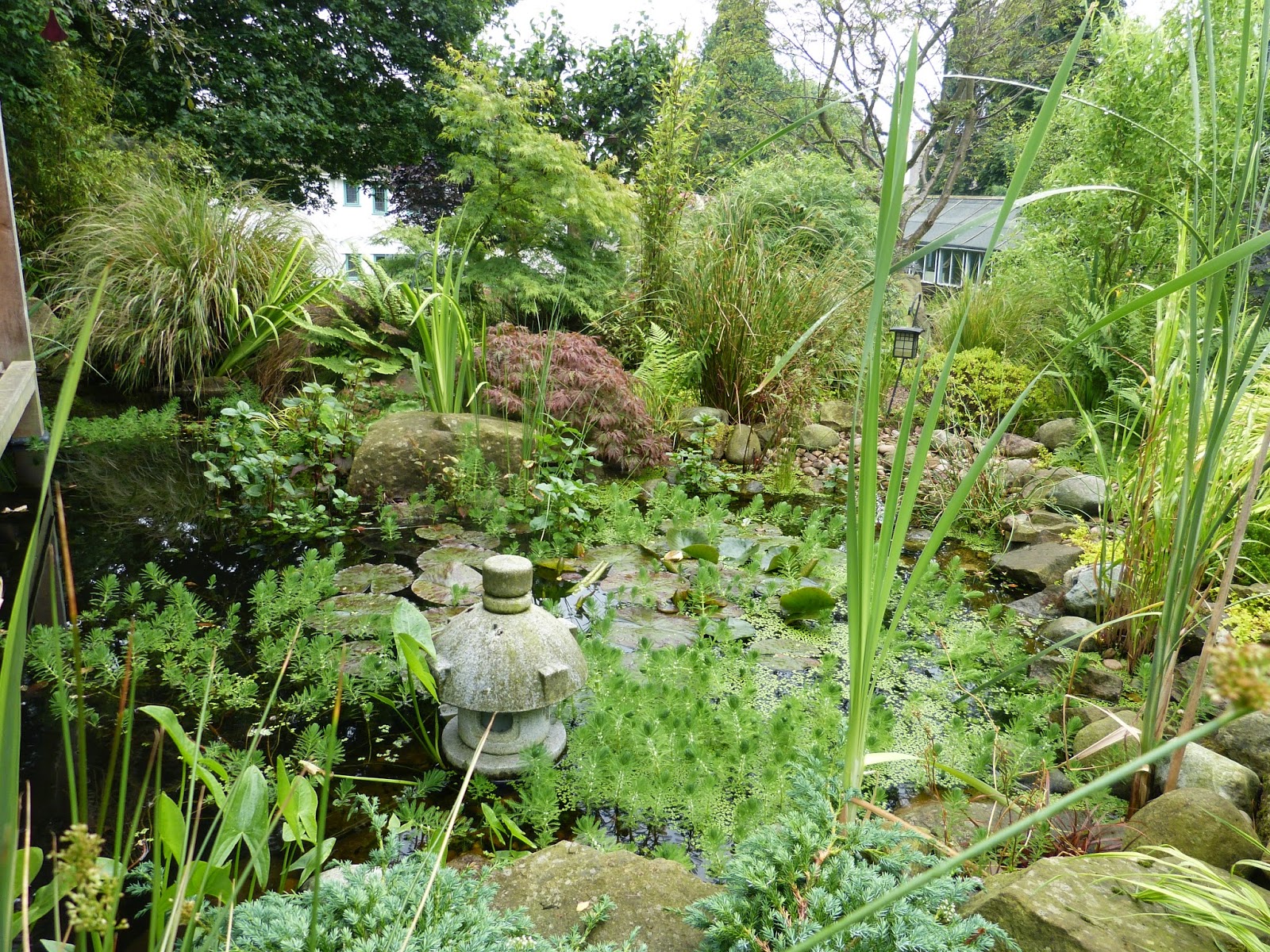 Hope you enjoyed your tour? It's not finished yet....will it ever be?! I'm in the middle of replacing a lot of the 'filler' grasses with hebes, euphorbias and box balls. I'm also planting moss and other ground cover. Still got 2 paths to finish and some other stuff to do, so watch this space!
Posted by Nutty Gnome at 19:56

Everything takes far far longer than you think it will but in the end it is worth it and keeps you out of mischief.

I never seriously thought it'd only take 6 weeks one summer, but I never thought it'd take 8 years either Sue!
I do love it though and I am happy with it - and,yes, it does keep me out of mischief ...mostly! ;-P

Love, love, love! Aren't you happy that you took all the photos along the way? Hugs!

Absolutely gorgeously stonkinly deliciously BEAUTIFUL! I am staggered and amazed at your boys managing to move the Tsukubai (and equally impressed that Himself actually made it for you in the first place).

I do hope I can get to see it for myself sooner rather than later :}

Much love from Parts North!